Rio Grande Valley Sector Border Patrol agents discovered 24 migrants hiding inside a grain hopper rail car near Robstown, Texas, on Monday morning. The migrants appeared to have boarded the train near Laredo, about 120 miles away.

Corpus Christi Border Patrol Station agents performing train check duties on May 10 near Robstown discovered “tell-tale signs” of human smuggling activity on one of the grain hopper railcars, according to information provided by Rio Grande Valley Sector Border Patrol officials. The agents began a search of the train and found 24 migrants hiding inside the grain hopper. 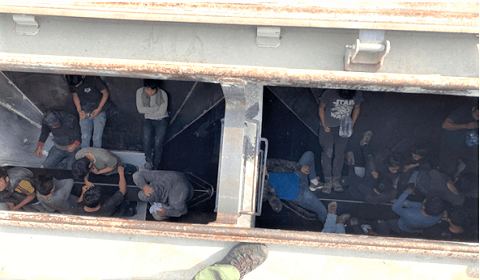 The agents quickly removed the migrants and learned they boarded the train illegally after crossing the border near Laredo. Laredo is located approximately 120 miles southwest of Robstown.

The agents conducted immigration interviews and welfare checks on the migrants. They identified the migrants as foreign nationals from Mexican and Guatemala. All 24 are reported to be adults who are illegally present in the United States. They will likely be removed under Title 42 coronavirus protection protocols put in place by the Centers for Disease Control and Prevention.

A medical screening determined all of the migrants to be in good health other than one migrant who cut his chin when he entered the grain hopper in Laredo.

Human smugglers frequently stash migrants inside grain hoppers or lock them into other rail cars.

In September, Laredo Sector Chief Patrol Agent Matthew Hudak tweeted photos of a group of 13 migrants who were locked inside a grain hopper rail car. He said the group were trapped inside a confined space and could not have escaped.