On Saturday, a semi tractor-trailer driver led Border Patrol agents in Laredo, Texas, on a pursuit after fleeing from an immigration checkpoint on Interstate 35. The driver was asked to pull aside for a closer inspection after a K-9 alerted to the possible presence of humans or narcotics inside the trailer. The vehicle fled in response.

The rig ultimately stopped in the median on the busy interstate. The driver fled the scene and managed to escape. More than 100 migrants were found inside the locked trailer compartment. Among the group were eight children.

Border Patrol agents in the Laredo Sector have rescued nearly 500 migrants in trailer compartments in the past 10 days. The trailers, often unventilated, can serve as death traps in the south Texas heat. As temperatures rise, the Border Patrol struggles to interdict and rescue the migrants before it is too late.

On the I-35 corridor near Laredo, the Border Patrol employs K-9 teams, non-intrusive x-ray scanners, and old-fashioned interview techniques to thwart human traffickers daily. On Friday, Border Patrol Agents discovered more than 50 migrants in another incident at the same checkpoint. The migrants were trapped in a tanker-type trailer with no ventilation.

In Laredo, outside temperatures peaked over 99 degrees and will soon surpass the 100-degree mark. Detecting and interdicting this method of human trafficking poses significant challenges to an already stretched thin Border Patrol. The consequences for the migrants could be death.

Although the Border Patrol has undertaken efforts to prevent this type of smuggling, it is still like finding the proverbial needle in the haystack. Customs and Border Protection estimates more than 2 million commercial vehicles enter the United States through Laredo every year. The area also draws domestic truckers from all over the country. It is not easy to build a profile.

A CBP spokesperson tells Breitbart Texas the agency also works with the Texas Department of Public Safety in a program known as “Texas Hold-Em.” This penalizes commercial drivers who are caught attempting to smuggle humans or other contraband by revoking their commercial vehicle license for life. 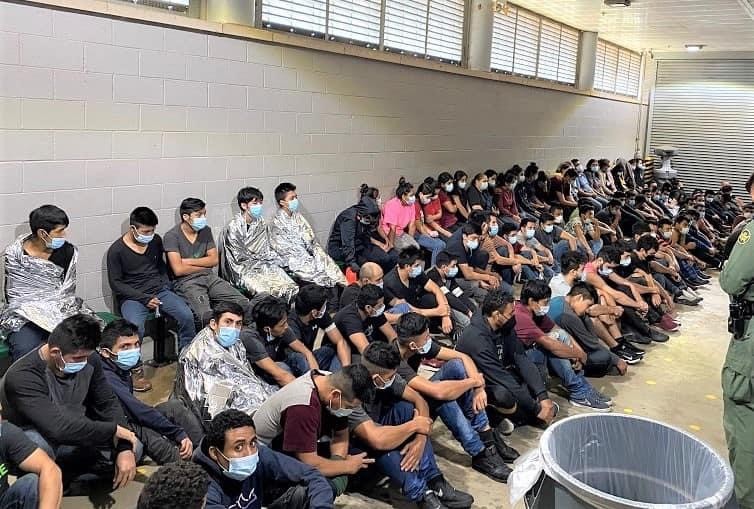 This dangerous method of human trafficking is not new. In April 2018, a federal judge sentenced 61–year–old Louisville, KY, truck driver James Matthew Bradley, Jr. to life in prison without parole for his role in a migrant smuggling operation which resulted in 10 deaths. Bradley was arrested after a truck he was driving was found abandoned in a San Antonio, Texas, parking lot in 2017.

The current border surge has created a strain on an already stretched border enforcement agency. The Border Patrol is increasingly tasked with the processing and care for thousands of asylum-seeking migrants and unaccompanied children.