Protesters greeted Vice President Kamala Harris during her visit to the border in El Paso with signs asking, “Do you hear their screams?” The signs reference the inhuman conditions in Biden-Harris unaccompanied migrant children detention centers.

Another protester held a sign asking “How many little girls need to be raped for this to be a crisis?” Another sign blessed Border Patrol agents.

Republican officials sent a mobile billboard to follow the vice president’s visit to the El Paso border region. The rotating panels on the truck highlighted the 20-year high in southwest border migrant encounters and the record levels of fentanyl being smuggled across the unsecured border. 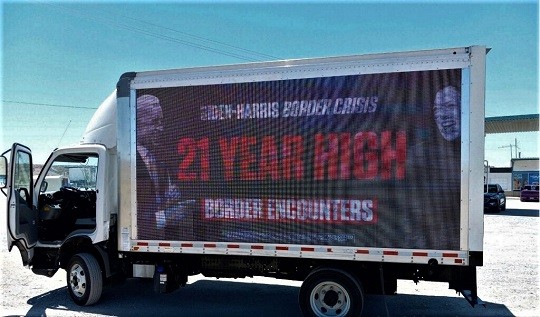 In reference to the vice president’s previous comments that she hadn’t “been to Europe either” during an NBC’s Lester Holt.

“You made a wrong turn,” the protester’s sign reads. “This isn’t Europe.”

One protester told independent journalist @InformedAnthony, “You (Harris) came a little too late.”

“We have had this crisis for years. We need solutions. We don’t need you parading in the Border Patrol station, or acting like you care,” the protester added. “Americans matter. America matters. God bless you America.”

At the other end of the Texas-Mexico border, residents in the Rio Grande Valley expressed their concerns about the Biden-Harris border crisis on their daily lives, Breitbart Texas reported.

“As Texans who live and work along the Southern Border, we are asking America to pay attention to the crisis raging at our doorstep,” the three Texans began in the letter to Biden and Harris provided exclusively to Breitbart Texas. “We’re asking America to listen when we tell you that it is a crisis. It is chaos.”

“We are on the front lines of this disaster,” the three Texans wrote. “And it started just weeks after Biden and Harris took office.”

“Crime is surging as drug cartels and human smugglers capitalize on Joe Biden and Kamala Harris’s open-borders agenda,” the letter continues. “Migrant children are being abandoned in the desert and dropped over walls. Human beings are drowning in the Rio Grande because Biden and Harris told them they could come.”

“I’m not worried about the family units that give up; I am concerned with mostly groups of males that are screaming in Spanish at me in my back yard,” one Del Rio resident told Ortiz. “I have daughters and I am worried for their safety.”

With four months to go in the current fiscal year, Border Patrol agents apprehend 897,213 migrants. Of those, more than 605,000 took place in the five Texas-based border sectors. This represents more than two-thirds of all southwest border migrant apprehensions, according to statistics provided by U.S. Customs and Border Protection.