When the Petito saga first broke into the news, the initial bodycam footage from August 12 appeared to show that Moab, Utah, police were responding to a domestic violence dispute in which Petito was the aggressor. Shortly after authorities uncovered Petito’s body following her disappearance, the narrative took a sharp turn when an unearthed 911 call revealed a witness telling the operator that Laundrie was the abuser, not Petito.

According to bodycam footage from a second officer who arrived at the scene of the domestic violence dispute, Petito confirmed that Laundrie hit her. 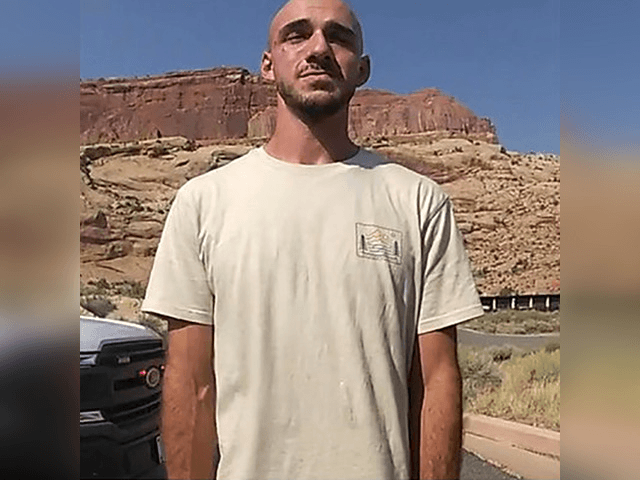 This Aug. 12, 2021 file photo from video provided by The Moab Police Department shows Brian Laundrie talking to a police officer after police pulled over the van he was traveling in with his girlfriend, Gabrielle “Gabby” Petito, near the entrance to Arches National Park. Laundrie, the boyfriend of Gabby Petito, whose body was found at a national park in Wyoming after a cross-country trip with him, has been charged with unauthorized use of a debit card as searchers continue looking for him in Florida swampland, federal authorities announced Thursday, Sept. 23, 2021. (The Moab Police Department via AP, File)

“Did he hit you though?” the officer asked in the video obtained by Fox News.

“I guess,” she replied with tears in her eyes. “I guess, yeah, but I hit him first.”

“Where did he hit you?” the officer replied. “Don’t worry, just be honest.”

Just then, Petito appeared to backtrack on her statement to say Laundrie grabbed her “with his nail.”

“Did he slap your face, or what?” the officer asked.

“Well he, like, grabbed me with his nail, and I guess that’s why it looks — I definitely have a cut right here,” she said. “I can feel it. When I touch it, it burns.”

At another point in the video, the same officer spoke with the witness who made the initial 911 call and asked him to clarify if he saw Laundrie hit Petito.

“Did you ever see the male strike the female?” he asked.

“I wouldn’t say that,” the witness replied. “I think I saw maybe a push or a shove, but not a full-on punch to a face or anything.”

“You did see her slapping him though it sounds like,” the officer said.

After Gabby Petito’s death was ruled a homicide, domestic abuse experts began to suggest that her behavior during the police stop corresponds with abuse victims who cover up for their abuser by trying to deflect blame. The Moab, Utah, police chief has since taken a leave of absence due to the case’s intense publicity.

Brian Laundrie has been missing since September 14 and has only been charged with the crime of fraudulently using a debit card during the time that Petito reportedly disappeared.