Duane “Dog” Chapman, also known as Dog the Bounty Hunter, shared video Sunday of himself and others wading through waters in Florida amid the search for Brian Laundrie.

“The search has continued throughout the weekend on the islands off the west coast of Florida. #justiceforgabby #brianlaundrie,” the video’s caption read:

The search has continued throughout the weekend on the islands off the west coast of Florida. #justiceforgabby #brianlaundrie pic.twitter.com/j6AozoP6UL

Chapman recently joined the search for Laundrie, vowing to find the boyfriend of deceased Gabby Petito before his 24th birthday in November.

He has been working to confirm a tip regarding a sighting of Laundrie near the Appalachian Trail, the New York Post reported Sunday:

Lyssa Chapman, the daughter of Duane “Dog” Chapman, told The Post she has been in contact with Dennis Davis, who claims he spoke with Laundrie on a deserted road near the border of Tennessee and North Carolina on Saturday morning.

“I do believe Dennis. I am convinced he’s convinced,” she said. “We’re doing everything we can to verify Dennis’ tip but there isn’t much to go off other than the location. But we’re working that tip for sure.”

Chapman has suspected Laundrie was on the Appalachian Trail since his search mission began one week ago.

Laundrie is wanted regarding alleged bank fraud charges after Petito was found dead in Wyoming in September. 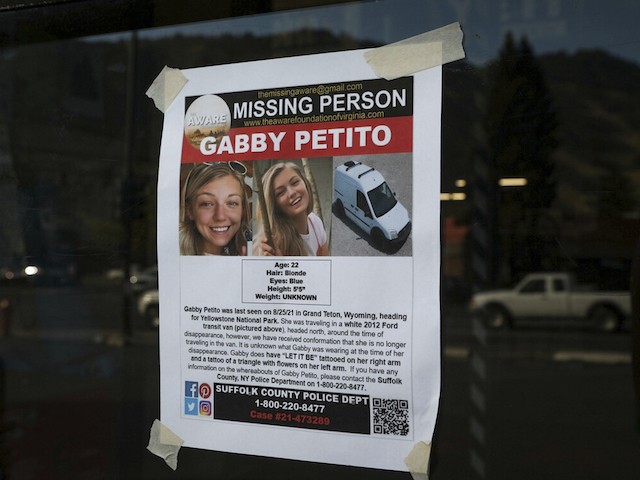 Chapman also kept looking for Laundrie in Pinellas County in Florida on Sunday, and planned to stay there until there was concrete evidence to look in other places, the Post report said.

“Dog tracked the Laundrie family to a campground at Fort De Soto Park, which was later confirmed by public records that showed Laundrie’s mother, Roberta, checked into ‘Site 001-Waterfront’ between Sept. 6 and Sept. 8 after Petito was last seen or heard from,” the outlet stated.

In a social media post on Wednesday, Chapman’s team said it was searching an island near the park in Pinellas County, and K-9 teams were brought in to aid in the investigation:

Dog & team are still searching an island near Fort De Soto Park in Pinellas County, FL. K-9 teams have been brought in to assist. The search will continue into the evening.

Dog is grateful to everyone assisting & for the thousands of tips. Keep them coming in to 833-TELL-DOG. pic.twitter.com/TNEm8XM80f

UPDATE: Video is from this morning — earlier today we launched an active and specific search in a key area based on the intelligence we are receiving and researching. Boat crews and ground teams have been called in and we have search and rescue dogs deployed. More to follow… pic.twitter.com/g2tq85JTZX

Meanwhile, Laundrie’s attorney confirmed recently his sister saw him twice after he returned to his Florida home without Petito.

“Cassie Laundrie saw her brother on Sept. 1 when he stopped by her home, according to Brian’s attorney, Steven Bertolino. This is the same day law enforcement confirmed Brian returned to Florida from a trip he took with his fiancé,” NBC 2 reported.