“The Berlin State Criminal Police Office initiated investigations into the so-called Havana Syndrome in August on suspicion of dangerous bodily harm against unknown persons,” the newspaper revealed, citing the confirmation of an unnamed Berlin Police spokesman.

Berlin Police said they launched a probe into an “alleged sonic weapon attack on employees of the U.S. Embassy” in August in direct response to an earlier report on the suspected cases by Der Spiegel. The German newspaper supported this in its October 8 report, writing:

The basis of the German investigation is said to be material that the US government handed over to the German authorities after a SPIEGEL report on the Berlin incidents.

The German newspaper said Friday “several” staff members at the U.S. Embassy in Berlin reported “acute symptoms” that “corresponded to the pattern of the syndrome,” referring to a mysterious illness known as “Havana Syndrome.”

The symptoms included “nausea, severe headaches, ear pain, fatigue, insomnia, and sluggishness,” according to WSJ, which cited unnamed U.S. diplomats as its sources.

U.S. Embassy staffers began to report their emerging symptoms “in recent months,” the newspaper noted in mid-August, revealing that “some victims were left unable to work.”

“Some victims were intelligence officers or diplomats working on Russia-related issues such as gas exports, cybersecurity and political interference,” WSJ detailed.

The suspected cases of Havana Syndrome in the German national capital were, at the time, the first such cases to be reported in a North Atlantic Treaty Organization (N.A.T.O.) member state that also hosts U.S. military forces and nuclear weapons. 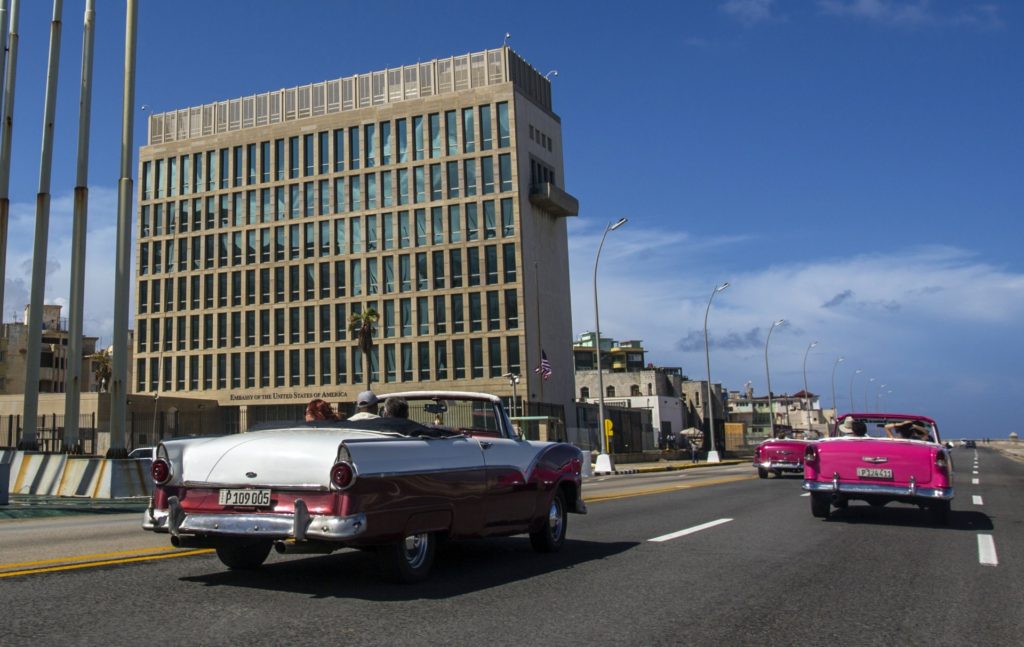 In this Oct. 3, 2017, file photo, tourists ride classic convertible cars on the Malecon beside the United States Embassy in Havana, Cuba. The Biden administration faces increasing pressure to respond to a sharply growing number of reported injuries suffered by diplomats, intelligence officers, and military personnel that some suspect are caused by devices that emit waves of energy that disrupt brain function. The problem has been labeled the “Havana Syndrome,” because the first cases affected personnel in 2016 at the U.S. Embassy in Cuba. (AP Photo/Desmond Boylan, File)

The first cases of Havana Syndrome first surfaced in 2016 among U.S. diplomats stationed at the U.S. Embassy in Havana, Cuba. U.S. diplomatic staff in China, Russia, and Austria have since reported cases of the syndrome. Unconfirmed cases of the illness have also emerged from Taiwan, Poland, Georgia, and Washington, DC.

So far, about 200 U.S. diplomats, government officials, and their family members have been affected by the syndrome worldwide. Roughly 100 of the alleged victims are employed by the U.S. Central Intelligence Agency (CIA).

“Some U.S. officials have said the complaints could be caused by attacks using radio-frequency energy such as microwave radiation,” WSJ noted on August 18.

“Experts are still unsure what causes the symptoms, but believe it may be caused by pulsed radio frequency energy,” Forbes reported on October 8. “People experiencing Havana Syndrome have reported hearing grating sounds. Some victims have had long-lasting health effects, like hearing loss and brain tissue damage.”

U.S. President Joe Biden signed a bill into law on October 8 that aims to provide financial support to U.S. federal employees affected by the syndrome.