Seattle’s downtown area is apparently so dangerous that King County workers will be escorted by security guards to transportation such as buses, trains, and ferries.

The move is part of a recent program amid another push to defund police; however, private sector workers will not have the option, Fox News reported Friday.

The initiative called the Walking Bus pilot program was announced to employees on Wednesday, “the same day the city council, seemingly going against the wishes of Seattle voters’ rejection of the defund police movement, proposed a nearly $11 million cut from the force,” the outlet continued. 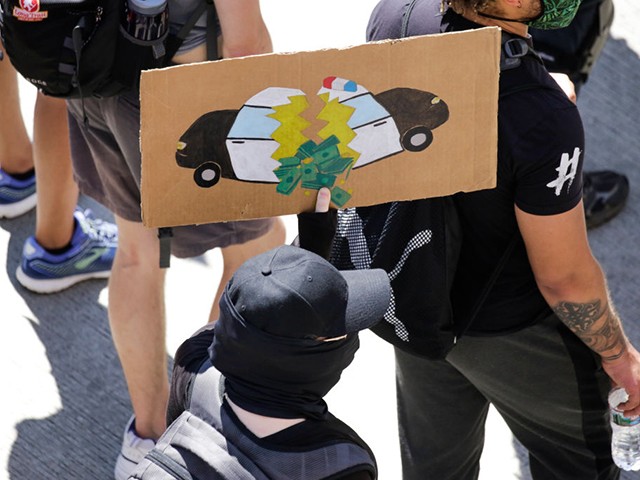 A protester carries a sign during a “Defund the Police” march from King County Youth Jail to City Hall in Seattle, Washington on August 5, 2020 (JASON REDMOND/AFP via Getty Images).

The county’s website said the program begins Monday so “county employees can join their colleagues and a Facilities Management Division (FMD) Security Escort each evening walking to the King Street Station and the Coleman Dock from the downtown campus.”

The meeting location will be the 4th Avenue entrance to the courthouse because the 3rd Avenue entrance was shut down because people in a homeless encampment had reportedly been attacking or harassing employees and visitors.

In November 2020, the Seattle City Council voted to reduce the police department budget as officers left the force in droves.

“Amid violent, nationwide uprisings and protests against police officers, Democrat Seattle Mayor Jenny Durkan’s office stated that 134 officers have left the city’s police force as of October 31. Last month alone, 23 officers left their positions at the department,” Breitbart News reported at the time.

Meanwhile, Mayor-elect Bruce Harrell, who ran on a public safety platform, recently spoke out about the council’s recent efforts to defund the police, according to the Fox report.

“It also delays our ability to develop and deploy a new kind of community-based, unarmed officer who will not carry a badge and gun. Overall, we need more, not fewer, public safety resources,” he added.