A shocking report revealed that almost half of the nation’s murder cases go unsolved, including around three out of four Chicago murder cases, a CBS News investigation team found.

Using FBI crime statistics to determine their findings, the team found that the national clearance rate for murder cases — meaning solved cases — in major U.S. urban cities had sunk to its lowest levels in over 50 years. The team primarily used data from 2020 as that year was the most recent release from the FBI.

Thomas Hargrove of the Murder Accountability Project told CBS News that from June 2020 to December 2020, most murder cases went unsolved. Furthermore, the number of homicides recorded in 2020 far outpaced past years.

The murder and violent crime rate began to rise in the U.S. at the same time the Black Lives Matters riots and the "Defund the Police" movement gained national notoriety in the summer of 2020. In that year, only 51 percent of murder cases were solved, according to the FBI.

Police also reported that understaffed and overworked departments led to a shortage of resources to solve most homicide cases.

The Chicago Police Department (CPD) did not submit clearance data to the FBI, which led the investigation team to submit a freedom of information request. They found that in 2020, the CPD clearance rate was 44 percent.

However, CPD data revealed that half of the murder cases they closed were "exceptionally cleared," which meant they "distinguished between cases that were cleared because a suspect was arrested and charged, and those cleared for other reasons," CBS News noted. An example of an exceptionally cleared case could be when a suspect is not charged due to a lack of evidence or when the suspect is found dead, resulting in the police department closing the case. 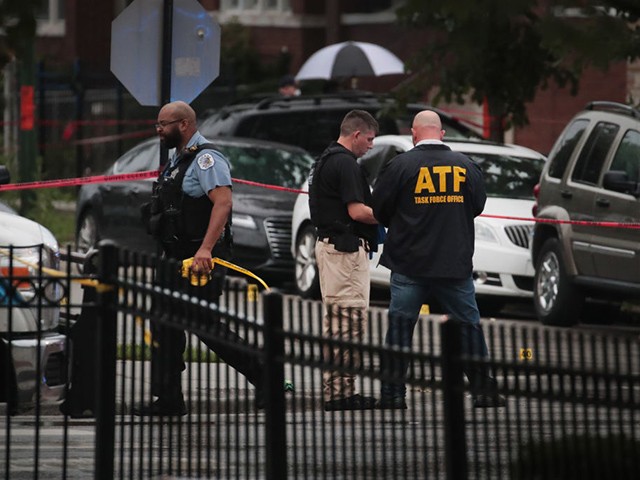 An ATF agent and Police investigate the scene of a shooting in the Auburn Gresham neighborhood on July 21, 2020, in Chicago, Illinois. (Photo by Scott Olson/Getty Images)

The FBI does not account for exceptional clearances because they are supposed to be rare, according to the investigation team's data findings -- but not in Chicago.

Taking exceptionally cleared cases out of the picture, only 24 percent of murder cases in Chicago were cleared in 2021, CBS News revealed. Indicating that around three out of four murderers are still possibly out on the Windy City streets.

Since the FBI does not include exceptional clearance cases in their crime reporting, unsolved murder cases in major urban cities could be much higher than what is documented.

Breitbart News has been documenting the violent crime surge that is taking place in major urban across the nation.