A number of Democrat-run cities in the United States have seen violent crime jump in 2022 compared to last year, a report has found.

Per data reviewed by Fox News, rates of violent crime – comprised of homicide, rape, robbery, and assault –  in New York City, Los Angeles, Washington, DC, Atlanta, Philadelphia, and Baltimore “are all on pace to break their 2021 levels.”

While speaking with Fox News, Heather Mac Donald of the Manhattan Institute called the alarming jumps in violent crime the “Ferguson Effect 2.0 or the Minneapolis Effect.”

“George Floyd’s death at the hands of Minneapolis police in late May was justly condemned — but the event has now spurred an outpouring of contempt against the pillars of law and order that has no precedent in American history,” she explained.

Democrat Mayor Eric Adams’s New York City is enduring the highest uptick in violent crime of any of the cities as there has been a 25.8 percent increase in homicide, rape, robbery, and assault, compared to the same period in 2021, Fox News reports. Moreover, the Big Apple’s crime statistics show the seven major felony categories – including the four violent crimes in conjunction with burglary, grand larceny auto, and grand larceny – have risen an astounding 38 percent through June 19 compared to the same time frame last year. 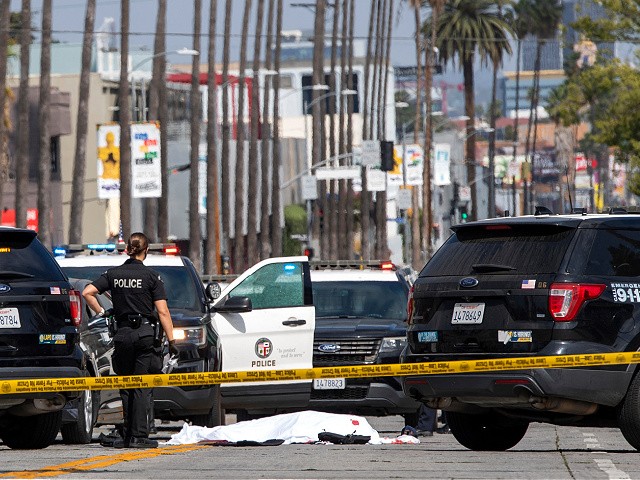 A LAPD police officer stands at the corner of Fairfax Avenue and Sunset Boulevard where a body covered in a white sheet lies on the pavement in Los Angeles on April 24, 2021. (VALERIE MACON/AFP via Getty Images)

Law-abiding citizens in Washington, DC, have borne the brunt of the second-highest violent crime increase of the six cities in 2022, according to Fox News. To this point in the year, the four crimes have soared 12 percent in Democrat Mayor Muriel Bowser’s D.C. when referenced with the same period last year. Homicide rates alone have climbed 13.3 percent this year compared to last.

In Atlanta, violent crime has seen a year-over-year jump of 5.5 percent under the leadership of Mayor Andre Dickens (D), with homicide rates skyrocketing 13.3 percent, according to Fox News’s reports. In Mayor Brandon Scott’s (D) Baltimore, violent crime has risen 6.1 percent since last year, and homicides have climbed 7.7 percent. Philadelphia has suffered a comparable increase in violent crime under the direction of Mayor James Kenney (D), climbing an even 7 percent in 2022 compared to the first half of 2021.