The private equity guys may have found some very good friends in an unexpected place: the U.S. Senate’s liberal Democrats.

The day after Democrat Senators Chuck Schumer and Bernie Sanders published a New York Times op-ed calling for limits on corporate buybacks, Ultimate Software Group announced that it had agreed to be bought by an investor group led by private equity firm Hellman & Friedman for about $11 billion.

If the Schumer and Sanders proposal ever became law, there would likely be many more of these take-private deals because the returns on investment in private equity would significantly improve relative to public stock shares.

At the heart of the Schumer and Sanders proposal is setting hurdles before companies can return capital to investors in the form of stock buybacks.

“Our legislation would set minimum requirements for corporate investment in workers and the long-term strength of the company as a precondition for a corporation entering into a share buyback plan. The goal is to curtail the overreliance on buybacks while also incentivizing the productive investment of corporate capital,” Schumer and Sanders wrote.

This would only impact public companies with publicly traded shares to buyback. Privately held companies, which return capital through going public and by paying dividends to their investors, would not face these legal barriers and the financial costs they impose.

This would mean that the costs of running a private company would increase or capital would remain trapped inside the company. Investors in the company would have the choice of either paying employees more than they otherwise would or selling the company to a private equity firm that will be willing to pay more for the company than public markets because it can operate it at a lower cost.

It’s not a mystery which one investors will typically prefer: sell the thing to the private equity guys.

This is exactly the kind of arbitrage opportunity private equity companies are built to seek out. Their portfolio companies would suddenly have a huge cost advantage over public companies.

At the start of this year, private equity firms were sitting on over $1.1 trillion of so-called “dry powder”–money committed by investors buy waiting for an opportunity. The Schumer-Sanders program would give this money many places to go.

Even firms that are too large to be bought out by private equity firms may are likely to find creative ways around the restrictions of the Schumer-Sanders proposal. Low-wage jobs could be outsourced, for instance, to third-party contractors, so that no actual employees would earn less than the minimum wage set by Schumer-Sanders. And those third-party contractors would likely be owned by private equity firms, since their wages would be so low that they wouldn’t qualify to return capital to investors as public companies.

These perverse results are unfortunate because Schumer and Sanders are addressing a real problem for the American economy:

From the mid-20th century until the 1970s, American corporations shared a belief that they had a duty not only to their shareholders but to their workers, their communities and the country that created the economic conditions and legal protections for them to thrive. It created an extremely prosperous America for working people and the broad middle of the country.

But over the past several decades, corporate boardrooms have become obsessed with maximizing only shareholder earnings to the detriment of workers and the long-term strength of their companies, helping to create the worst level of income inequality in decades.

The big change they describe is real and it is a problem. But it is better addressed by fostering policies that lead to a tight labor market that drives up demand for workers relative to the supply of workers. That means encouraging economic expansion while reducing things like temporary work visas and immigration that expand the pool of labor. 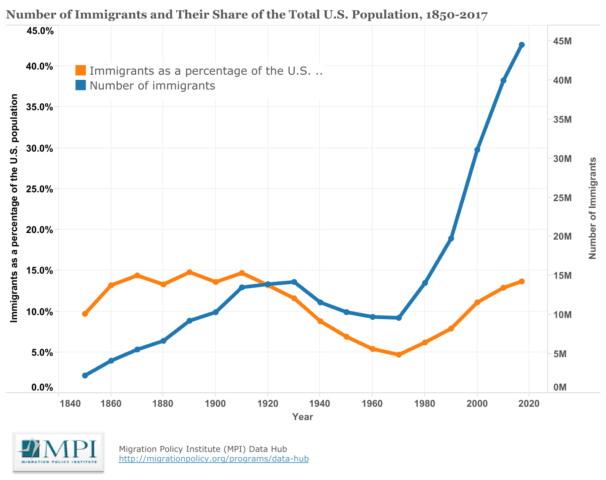 This chart displays both the number of immigrants residing in the United States and their share of the total U.S. population over time.

As this chart shows, the mid-century through 1970s period that Schumer and Sanders look back to as “extremely prosperous” for American workers was one in which immigration was falling in absolute terms and as a share of the population.  The period of corporations obsessed “with maximizing only shareholder earnings to the detriment of workers” was on in which the opposite was happening: the number of immigrants and the immigrant share of the population was rising.