President Donald Trump this week described Huawei Technologies, the Chinese telecom technology giant the U.S. government has said poses a threat to national security, as a “something that’s very dangerous.”

The U.S. has accused Huawei’s chief financial officer of defrauding banks to violate sanctions against Iran and stealing technology. The Justice Department and U.S. companies have accused Huawei of engaging in industrial espionage. Lawmakers and a surprisingly large number of U.S. government agencies have accused Huawei of being an arm and agent of the Chinese government, not only part of its military-espionage complex but also a key component of the Made in China 2025 plan to dominate high-tech manufacturing.

Less well known, however, is the fact that Huawei has built a massive new research facility called Ox Horn in Dongguan, China that is a miniature replica of Europe. Its building look like famous European castles, palaces, and plazas. It is divided into 12 separate “towns” with names like Paris, Verona, Bruges.

The chief executive of Huawei, Ren Zhenfei, founded 1987 the company after a career in the People’s Liberation Army, where he reportedly rose to become one of its top technology officers. As a college student in China he studied architecture at the Chongqing Institute of Civil Engineering and Architecture.

Copycat architecture is popular in China. There’s an Eiffel Tower in Beijing. An entire Austrian town has been duplicated in one area. Gondoliers push their boats through a Venice replica in port city of Dalia.

And some of the reasons the popularity have an uncanny echo of U.S. complaints about Chinese mercantilism.

“Usually if you want to see foreign buildings, you have to go abroad,” a woman named Zhang Li, who was touring a London replica known as Thames Town, explained to the BBC. “But if we import them to China, people can save money while experiencing foreign-style architecture.”

“Import” is not quite the right word. In fact, what Zhang was explaining is that if China can build Europe at home, its people can enjoy the benefits of European architecture without spending their savings in Europe.

There’s an even older, and darker, history of architectural appropriation in China. Each time Qin Shi, considered the first emperor of China, conquered a kingdom and brought it under his control, he had a replica of that state’s ruling palace constructed along the Wei River, where his own royal palace sat. (Xi Jinping, China’s dictator, has often been likened to Qin Shi, as was Mao before him.) The replicas were meant to convey Qin’s supremacy.

“American and European commentators — not to mention residents of the original cities — are variously amused, indignant, and, above all, puzzled,” Oxford archeologist Jack Carlson explained in a 2012 article for Foreign Policy. “This is not, however, the first time China has imported Western architecture on a grand scale. Now, as in China’s past, imitation isn’t intended as flattery. The ancient parallels for these copycat projects suggest that they are not mere follies, but monumental assertions of China’s global primacy. 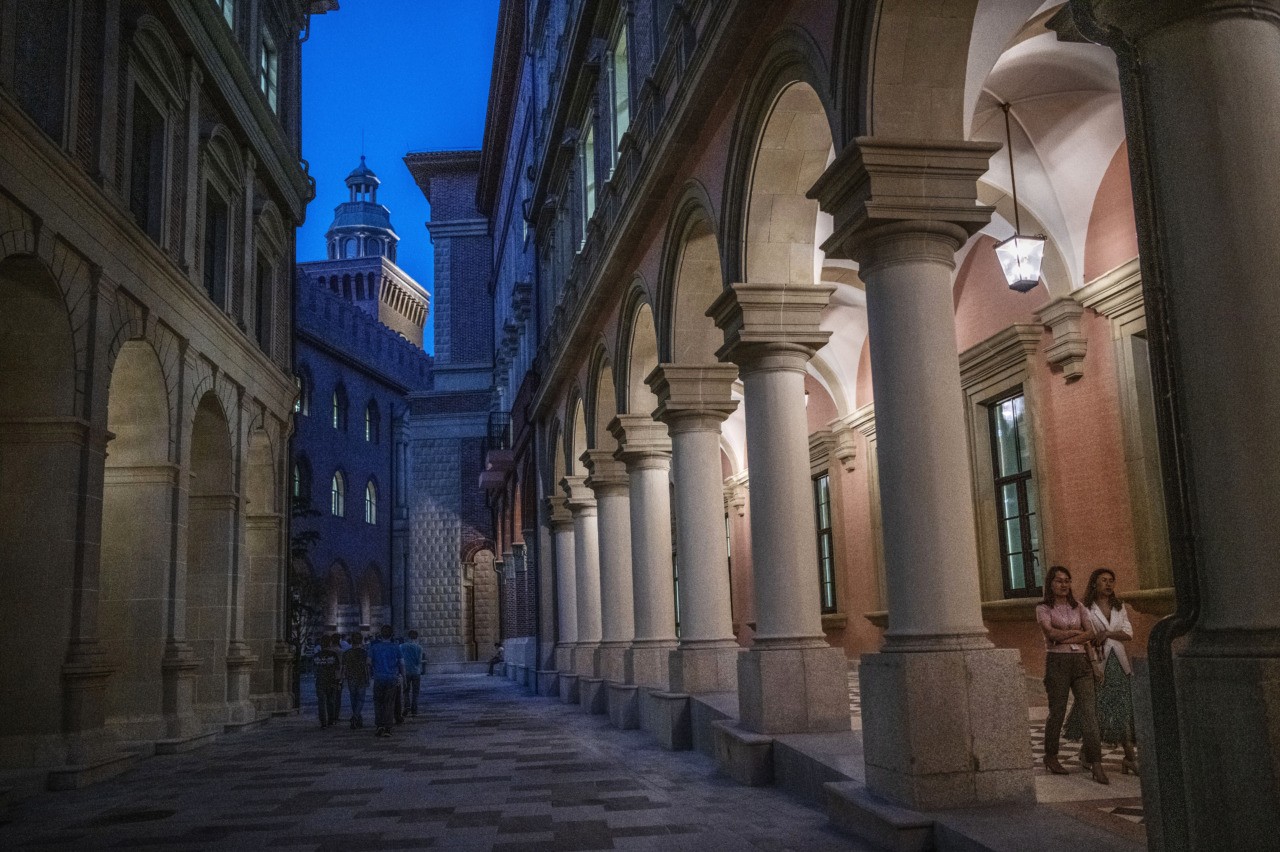 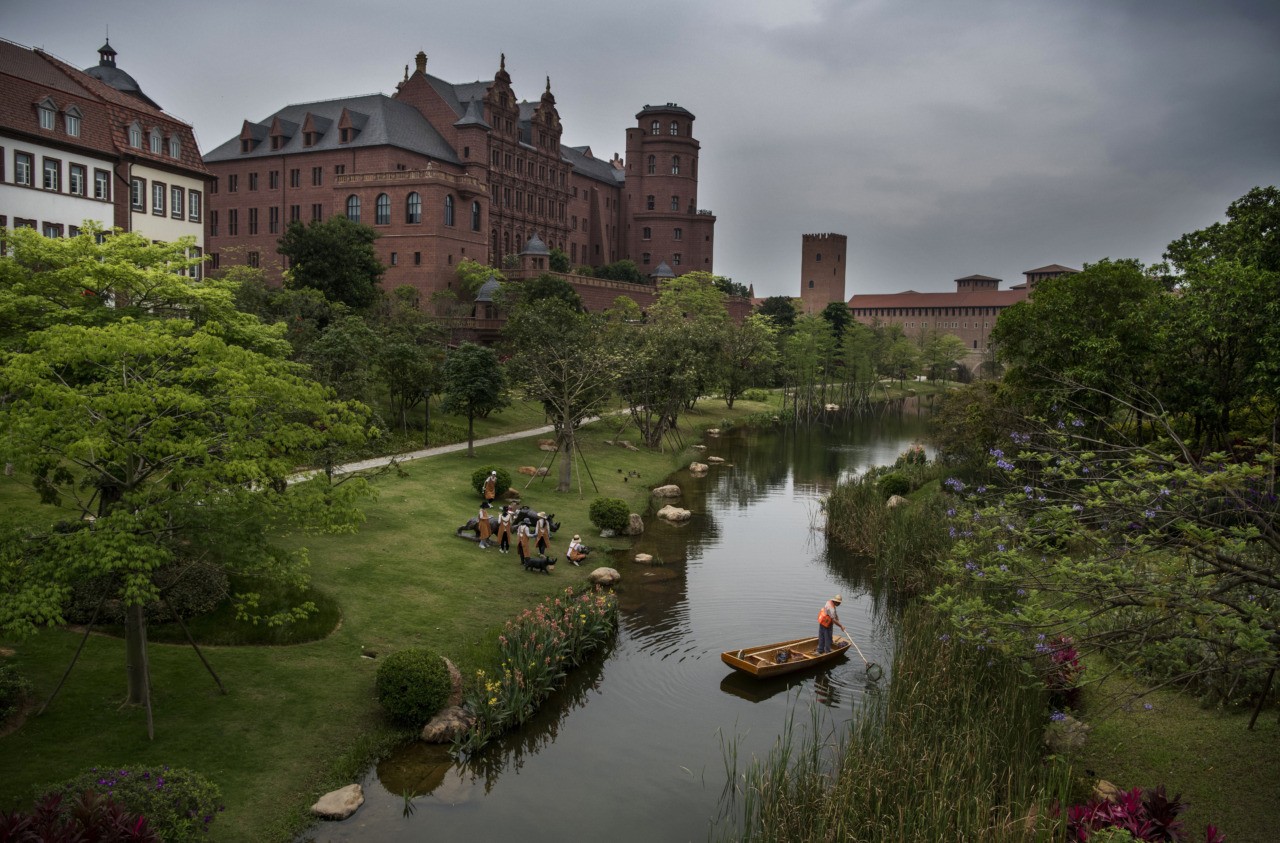 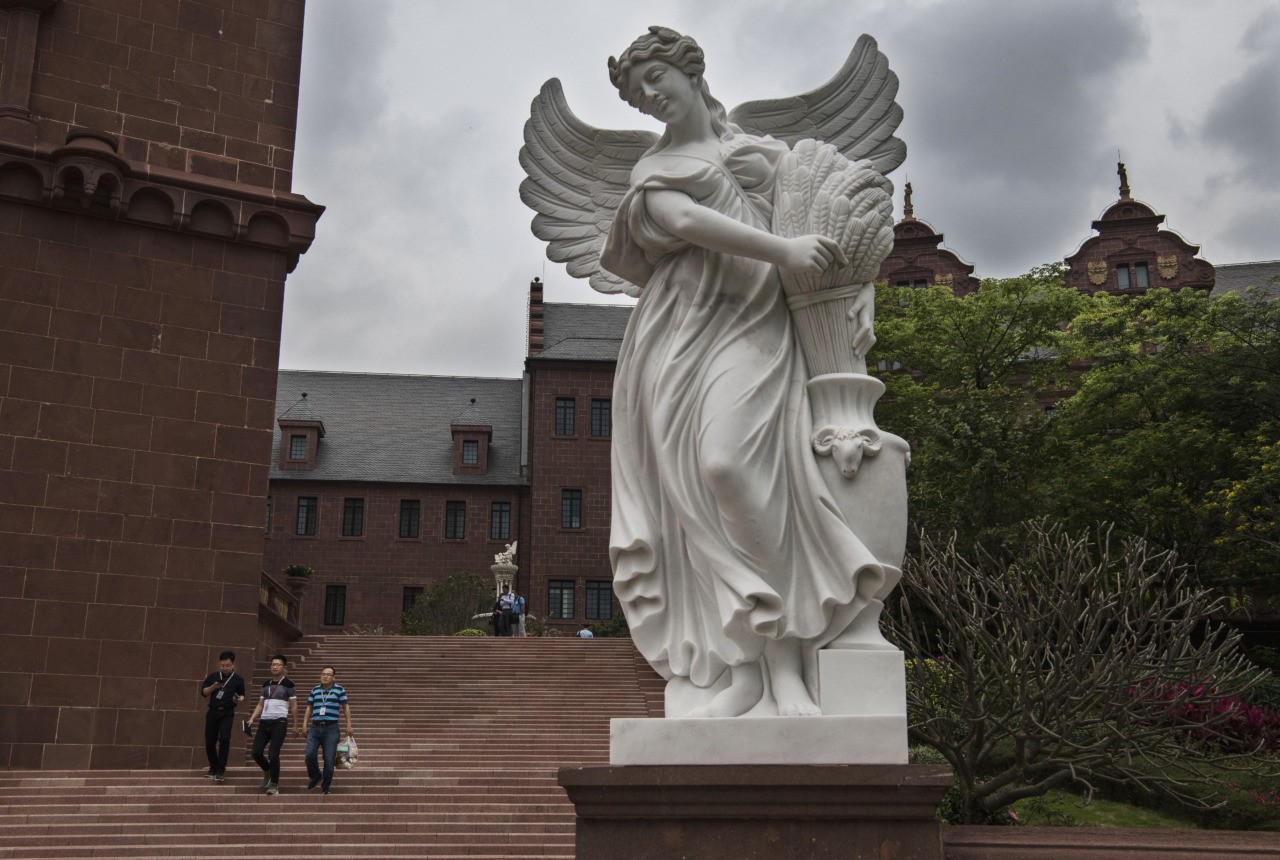 DONGGUAN, CHINA – APRIL 11: Huawei workers walk down a staircase in the “Heidelberg” area of the ‘Ox Horn’  campus. (Photo by Kevin Frayer/Getty Images) 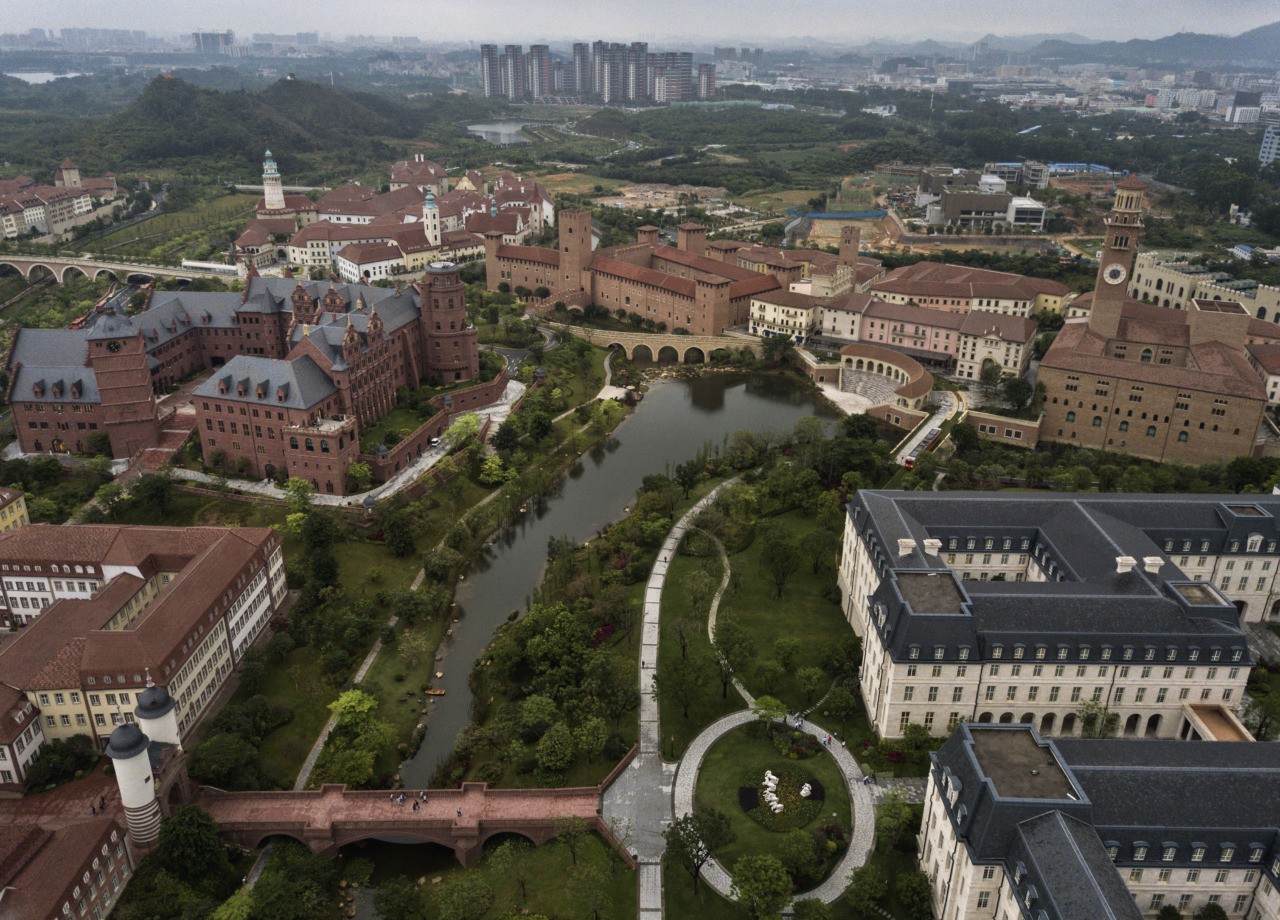 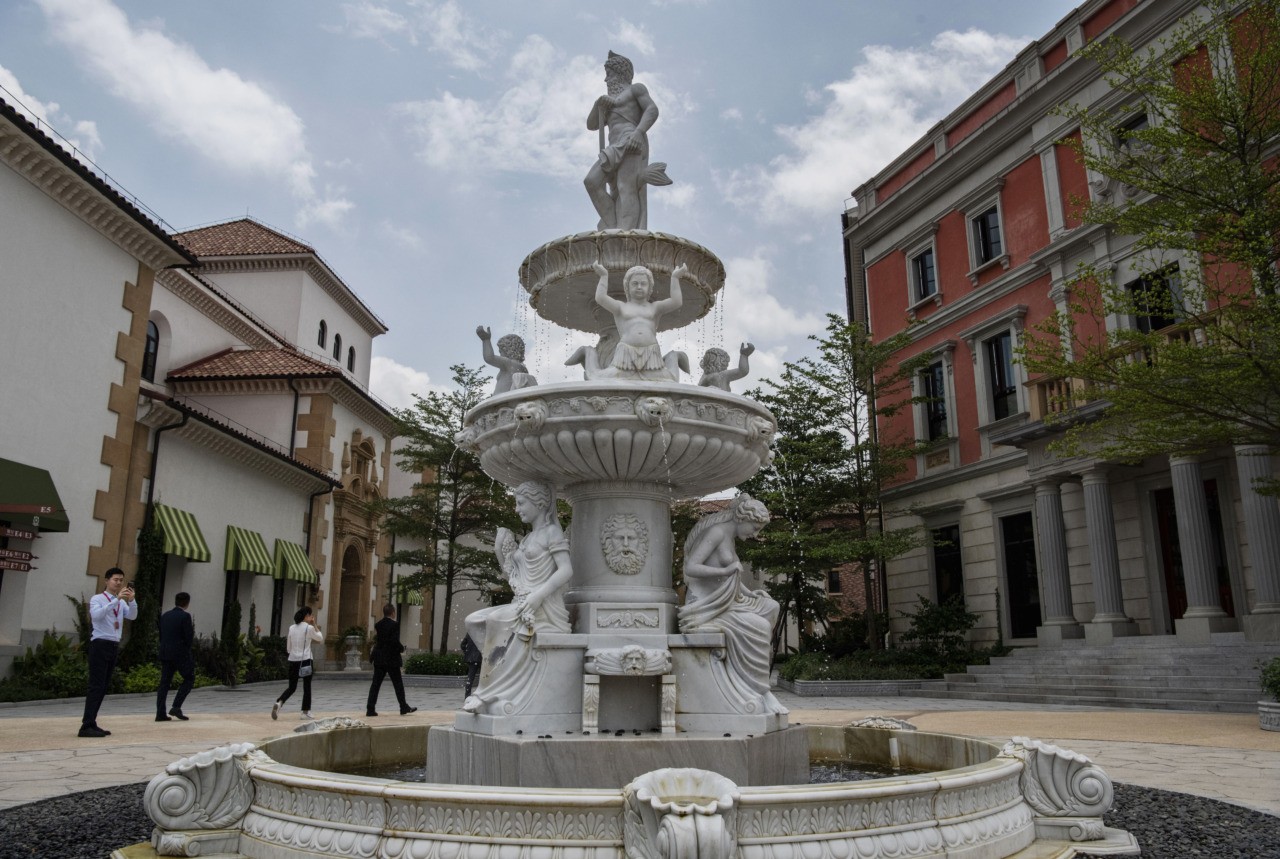 Visitors walk by a water fountain in the ‘Granada’ area of Ox Horn. (Photo by Kevin Frayer/Getty Images) 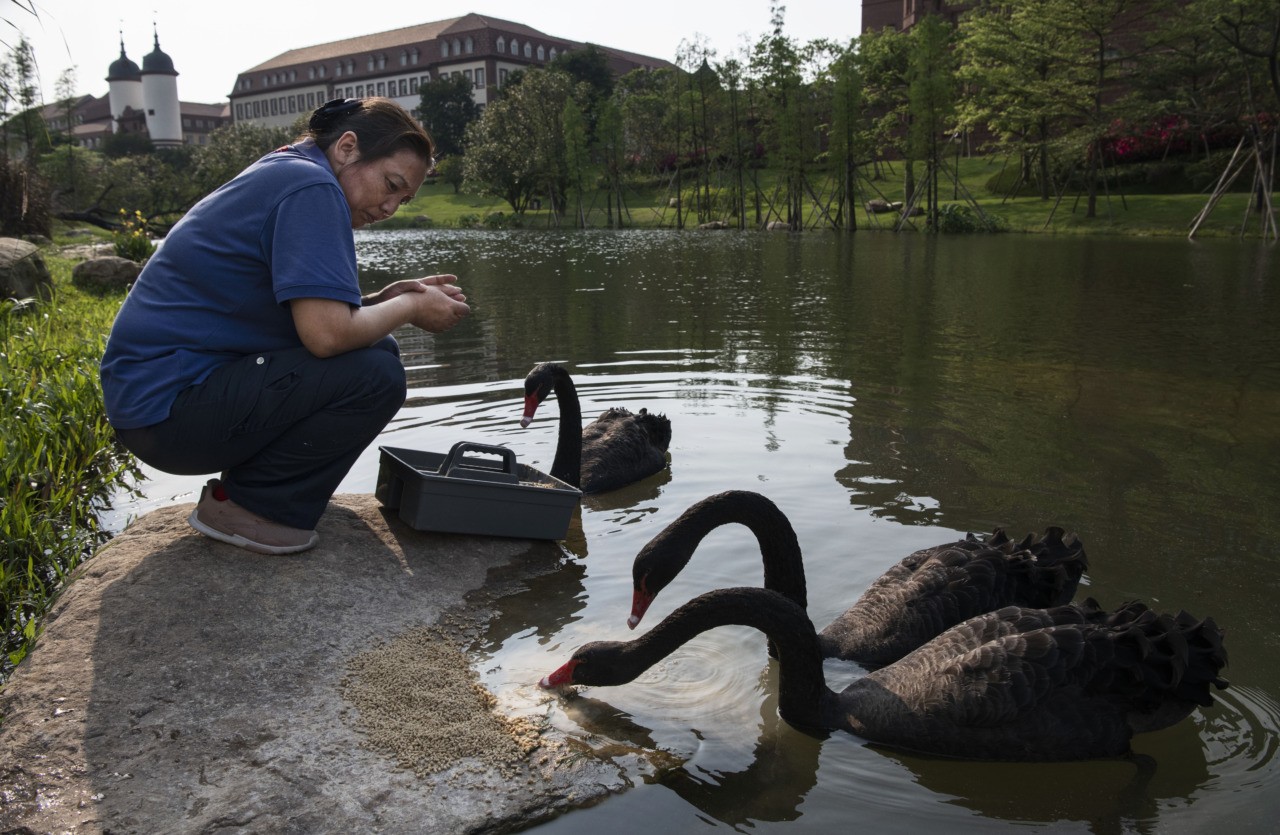 A Huawei groundskeeper feeds black swans, who are kept by the company’s founder Ren Zhengfei and represent “non-complacency in the corporate culture” at Ox Horn. (Photo by Kevin Frayer/Getty Images) 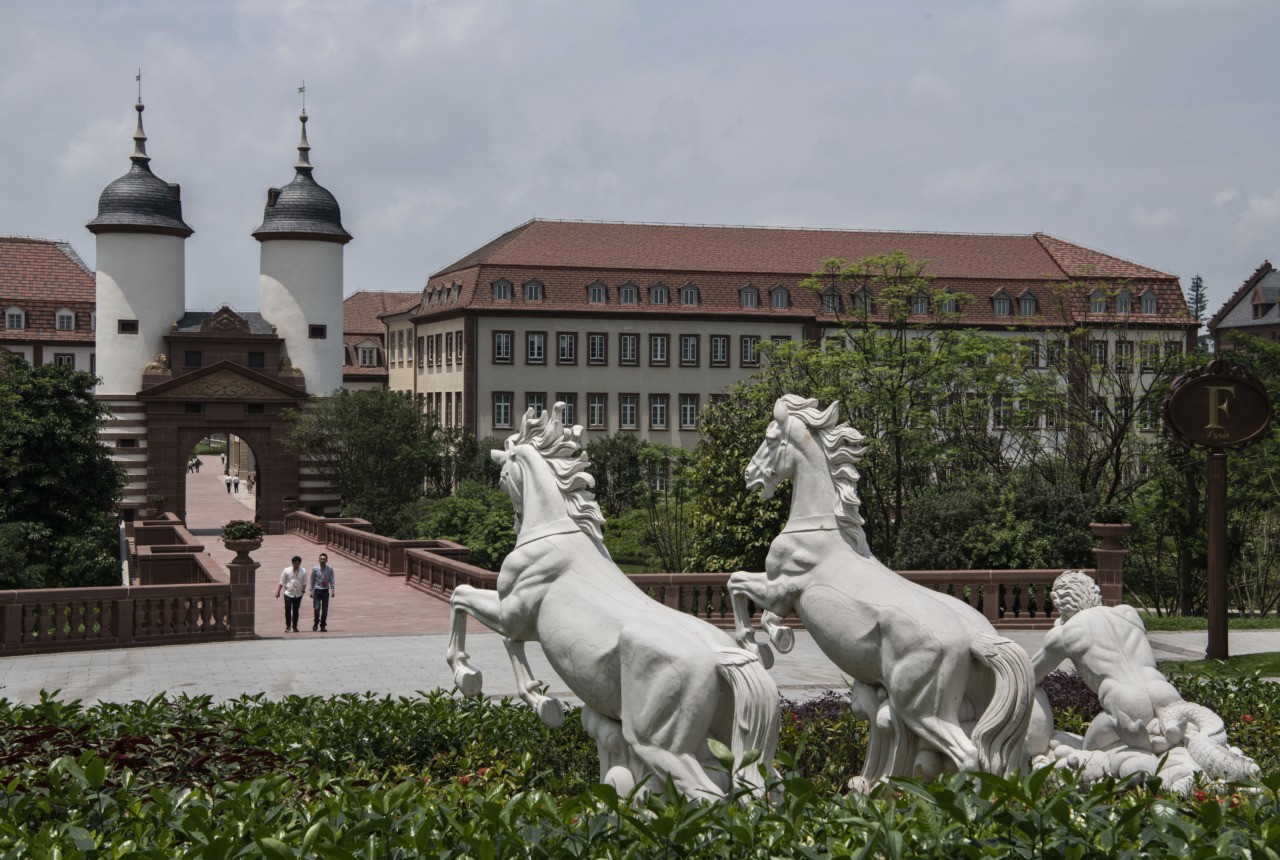 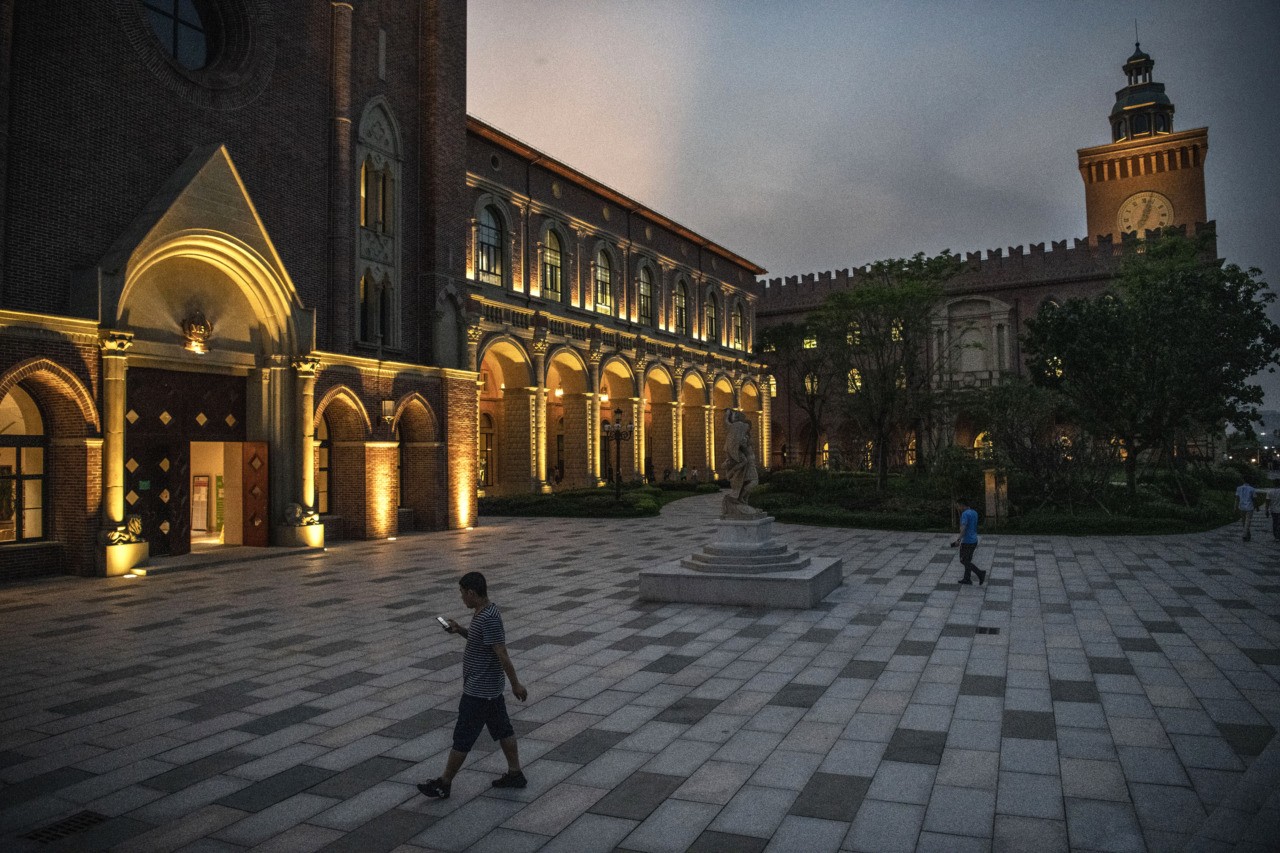 A Huawei worker looks at t his smartphone as he walks across a plaza at Ox Horn.  (Photo by Kevin Frayer/Getty Images) 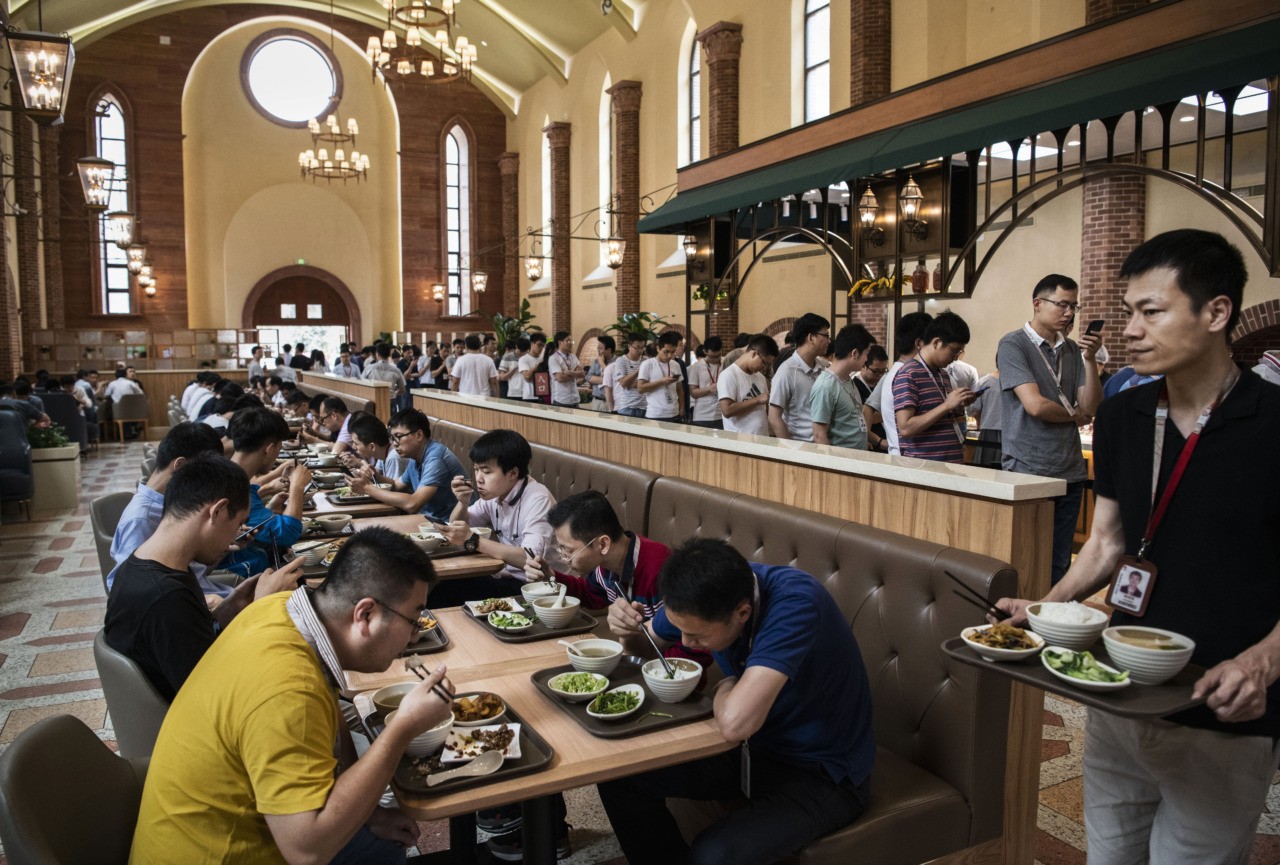 Hogwarts dining hall? Not quite. Here Huawei workers eat lunch as others line-up at one of many cafeterias serving subsidized food at Ox Horn. (Photo by Kevin Frayer/Getty Images) 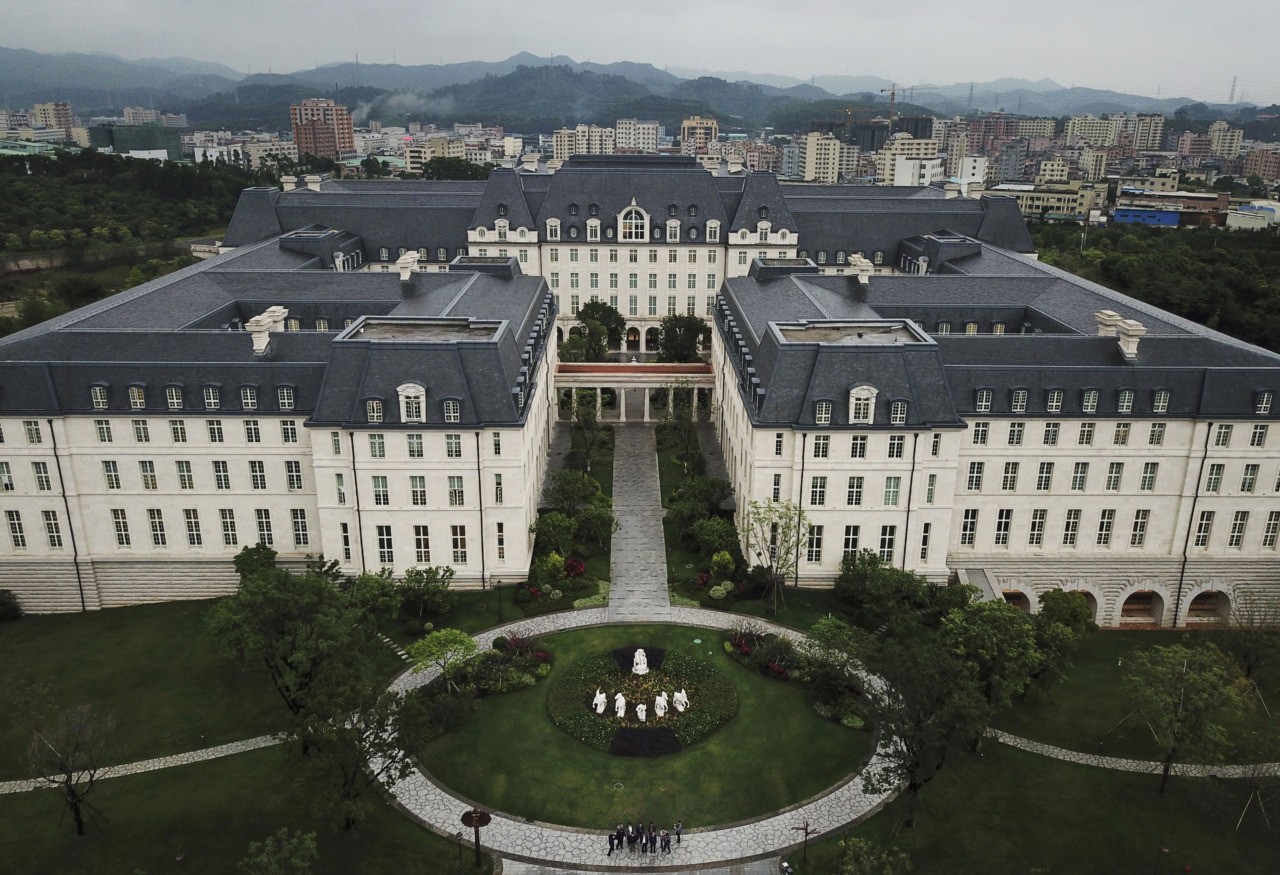 A replica of Versailles is seen in the Paris area of Ox Horn. (Photo by Kevin Frayer/Getty Images) 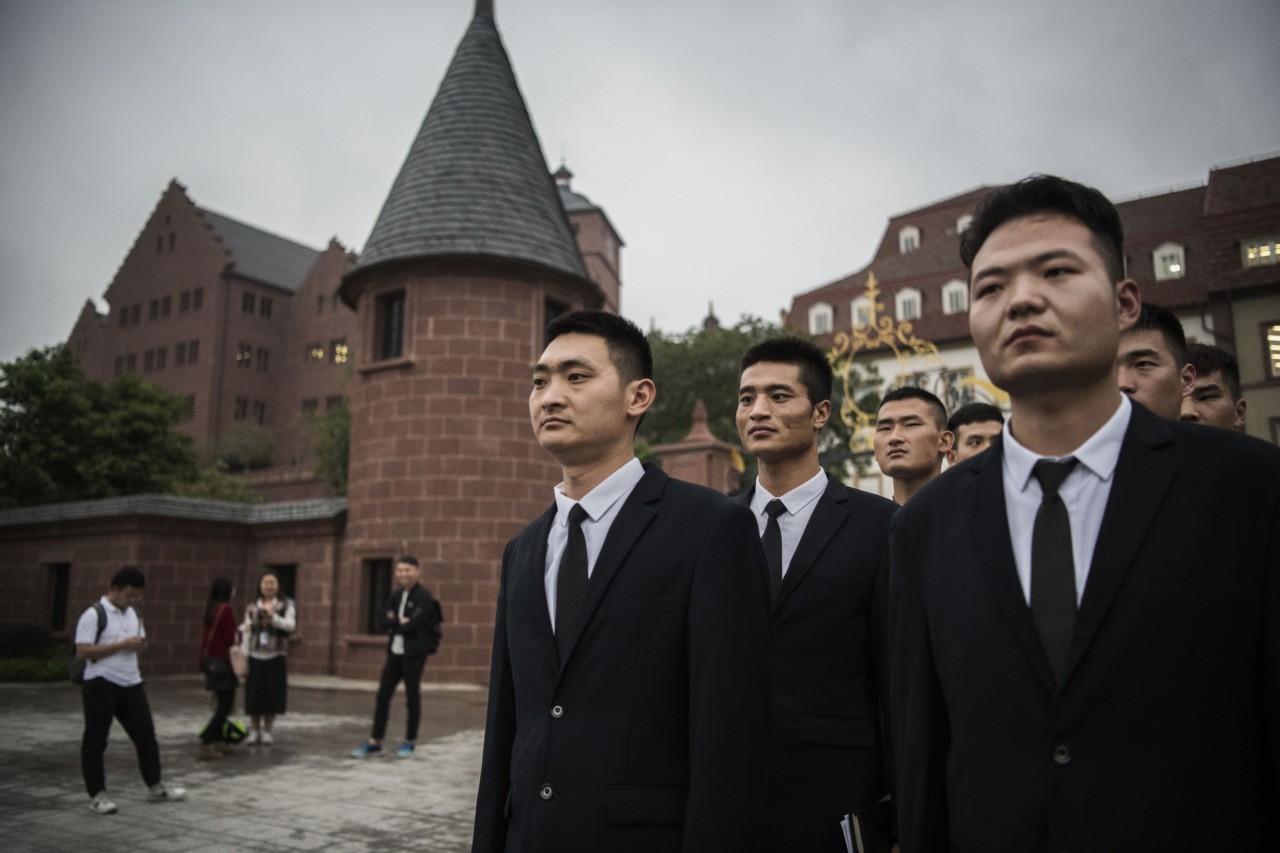 Huawei’s ‘Men in Black’ security guards line-up at the end of their workday at ‘Ox Horn.” (Photo by Kevin Frayer/Getty Images)