Immigration makes all of America richer, but it can make some Americans poorer, the non-partisan Congressional Budget Office says in a report issued January 9.

“Immigration, whether legal or illegal, expands the labor force and changes its composition, leading to increases in total economic output,” said the non-partisan report, titled “The Foreign-Born Population and Its Effects on the U.S. Economy and the Federal Budget—An Overview.”

But this national expansion does “not necessarily [deliver] to increases in output per capita,” or income per person, the report said:

For example, business leaders say the nation’s enormous population of immigrants has expanded the nation’s workforce, increased consumption, and driven up housing prices. But that inflow has also shrunk the wages of less-educated Americans, the report said:

Among people with less education, a large percentage are foreign born. Consequently, immigration has exerted downward pressure on the wages of relatively low-skilled workers who are already in the country, regardless of their birthplace.

The CBO report contradicts business claims that a bigger economy ensures bigger wages for everyone.

More ominously, the report also suggests that the American middle-class — including millions of young college graduates — may suffer a similar economic disaster if immigration policy is shifted to raise the inflow of foreign college graduates. The report says:

The effects of immigration on wages depend on the characteristics of the immigrants. To the extent that newly arrived workers have abilities similar to those of workers already in the country, immigration would have a negative effect on wages.

Many business advocates in Washington are calling for a dramatic increase in “high-skilled immigration” — meaning foreign college graduates who would compete for the same jobs as American college graduates. For example, Sen. Mike Lee (R-UT) is trying to pass his S.386 bill that offers the prize of renewable work-permits — and eventual citizenship — to an unlimited number of foreign graduates.

Each year, up to 120,000 foreign graduates — and their spouses and children — can get green cards via their employer’s sponsorship, even as perhaps 800,000 Americans graduate from college with skilled degrees.

But Lee’s bill creates a new legal status called “Early Adjustment.” This status would allow an uncapped number of college graduate migrants to apply for renewable work permits long before they can get a green card to become a legal immigrant and citizen.

Existing law allows an uncapped number of foreigners to legally get short-term work permits and jobs after enrolling in U.S. colleges. The migrants can get jobs by first paying tuition to a university, and then getting short-term work permits via the uncapped “Curricular Practical Training” and the “Optional Practical Training” programs. These workers must leave the United States after a few years until they enroll themselves in work permit programs.

But Lee’s bill would remove any caps on this foreign worker population by allowing an unlimited number of foreign workers to get “Early Adjustment” status from their employers.

Many migrants already use the CPT and OPT work permits to get jobs and to also compete for entry into the H-1B visa worker program. Once in the H-1B program — which accepts 85,000 new workers each year — many of the migrants also ask their employers to sponsor them for green cards.

The sponsorship allows them to stay working in the United States until they eventually get their valuable green card, long after their temporary visas have expired. Congress has not set an annual limit on the number of visa workers who can be sponsored for green cards, so the resident population of permanent “temporary workers” is growing fast — and is helping to suppress wages for American graduates.

Roughly 1.5 million foreign visa workers hold white-collar jobs throughout the U.S. economy. This number includes at least 750,000 Indians who are allowed to work via the supposedly temporary CPT, OPT, L-1, and H-1B visa programs. Roughly 300,000 of these Indians — plus 300,000 family members — are being allowed to stay in the United States because they asked their employers to sponsor them for green cards. 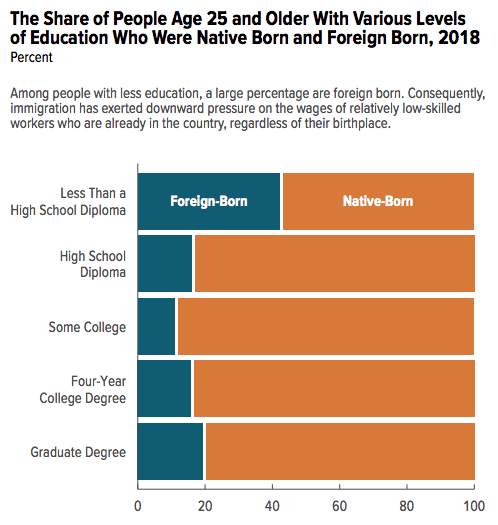 The 20 percent share likely would quickly rise if the Senate approves Lee’s S.386 plan — and that rise could sharply reduce salaries for American college graduates.

“Wage trends over the past half-century suggest that a 10 percent increase in the number of workers with a particular set of skills probably lowers the wage of that group by at least 3 percent” as the extra workers compete for jobs, says George Borjas, a labor economist at Harvard. That extra labor does expand the economy — but that expansion is dwarfed by the transfer of the wage reductions to investors, he wrote in 2016:

I estimate the current “immigration surplus”—the net increase in the total wealth of the native population—to be about $50 billion annually. But behind that calculation is a much larger shift from one group of Americans to another: The total wealth redistribution from the native losers to the native winners [mostly employers] is enormous, roughly a half-trillion dollars a year.

“In low-skilled occupations, a one percent increase in the immigrant composition of an individual’s occupation reduces wages by [0].8 percent,” said a 1998 report by the Center for Immigration Studies.

But all that cheap labor would boost corporate profits and spike the stock market, the report said. “The rate of return on capital would be higher [than on labor] under the legislation than under current law throughout the next two decades,” says the report, titled “The Economic Impact of S. 744.”

Business leaders sometimes admit that an extra supply of workers forces down wages. “If you have ten people for every job, you’re not going to have a drive [up] in wages,” U.S. Chamber of Commerce CEO Tom Donohue told Breitbart News on January 9. But “if you have five people for every ten jobs, wages are going to go up.”