The Department of Homeland Security revealed Wednesday it will allow many Indian H-1B visa workers to return from vacations in their homeland to regain the Fortune 500 U.S. jobs now needed by U.S. graduates.

The agency’s welcome for the H-1B outsourcing workers comes as 25 million Americans seek jobs amid the wreckage caused by China’s coronavirus epidemic, and after President Donald Trump barred the entry of legal immigrants for 60 days.

Late Wednesday, DHS told Breitbart News: “For non-immigrant H1-B workers who possess valid travel documents and who overcome all grounds of inadmissibility, including travel restrictions implemented to prevent the spread of COVID-19, [Customs and Border Protection] will continue to process for admission into the United States.”

DHS refused to say if CBP will ask the Indians if their U.S. or Indian employers have already laid them off, or have violated the terms of their work visa. U.S. graduates expect many U.S. employers have laid off some Indian visa workers — alongside Americans — amid the crash.

Federal law requires the Indians to go home if their hours or pay are cut. Yet many Indian visa-workers are using online communities to find new U.S. jobs ahead of American graduates.

The first flight from Mumbai lands in New Jersey on Thursday morning. 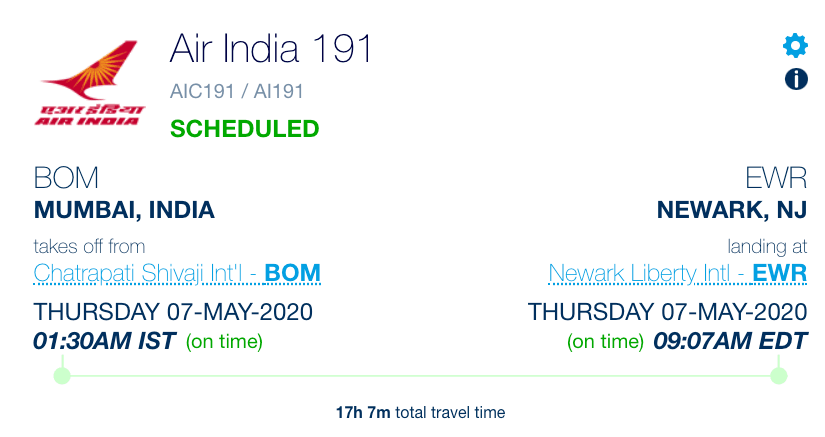 An Indian newspaper, the DeccanHerald.com, reported “hundreds” of “Non-Resident Indians” are trying to return to the United States:

Srikanth came to Bengaluru on March 15 with his children for a family emergency, leaving his wife alone in Boston, where the techie couple has been living for several years now. “I must return immediately or I may end up losing my job,” he said.
…

“My job and livelihood everything is at stake. I am on a valid H1B visa and my employer is pressuring me to return back as early as possible,” Shankar (name changed), one of the many stranded NRIs, said.

Polls show the public is overwhelmingly against the welcome for foreign workers — many of whom were given their jobs by other Indians working at U.S. companies, usually without regard to job searches by each year’s cohort of 800,000 white, Hispanic, Asian, and African-American skilled college graduates.

On April 22, President Donald Trump recognized the public demand for curbs and imposed a 60-day shutdown on legal immigration into the United States.

The temporary exclusion applies to legal immigrants, but it exempts several favored classes. The exempted people include people who buy green cards via the EB-5 loan program, as well as “any alien whose entry would be in the national interest, as determined by the Secretary of State, [or] the Secretary of Homeland Security.”

The pressure also came from U.S. investors who are working with India’s government to expand the U.S.-India Outsourcing Economy to build on China’s role as a source of cheap blue-collar labor.

The Indian workers allow investors and executives to expand stock values by shrinking payrolls for U.S. graduates. Most of the H-1B contract-workers are paid less than American graduates, according to a May report by the Economic Policy Institute.

The acting secretary of the DHS, Chad Wolf, is a former lobbyist for the India-based outsourcing industry.

The one million Indians include some 600,000 Indians in H-1B white-collar jobs, including banking, design, software, dentistry, management, and recruiting.

However, Trump also told his deputies on April 22 they need to relook at the many visa programs which destroy the jobs and salaries required by millions of college graduates in all 50 states around the country. Trump’s proclamation said:

This 30-day process will pressure officials to examine the impact of the H-1B, B-1, L-1, OPT and CPT programs on American voters.

But “the administration is taking its cues from Silicon Valley,” such as Tim Cook, he added.

Indian visa workers have used Twitter to lobby for the return flights by saying they need to return to U.S. jobs and to extend their work permits.

#RemoveVisaClause My visa is expiring in June. But my employer already ready with documents for extension. Before that I should be in Finland for them to apply the extension. Please remove Visa validity clause.@HardeepSPuri @PMOIndia @MEAIndia

@MoCA_GoI @HardeepSPuri Could you pls clarify, that we will be allowed to travel with a valid visa (H1, L1 etc) issued for a period of 3 years but some expiring in less than 6 months from now? Renewal process can only start once we are in US. #DontFlyEmpty #HelpNRIsReturnToUSA

Can you please tell them that we have to be in USA to get it extended. I have job and My employer is ready with extendes client letter for VISA extension. Please help telling them its normal in Us to have a month or shorter visa and can travel to USA.

I want to go home because I miss my family 😭 a lot and I am at the verge of loosing my job for which I worked hard for 6 years..all my efforts will go waste. please I request the govt the to help us
@PMOIndia@AmitShah@HardeepSPuri
#IWantToGoHomeBecause#HelpNRIsReturnToUSA

@nitin_gadkari Sir please add voice to our case & #DontFlyEmpty planes to get back Indians stranded abroad. Let visa holders stranded in India go on those planes. We have been away from our families, out jobs for far too long. #HelpNRIsReturnToUSA #OutboundFlightsFromIndiaNOW https://t.co/OcLkOAgf2q

Immigrants — like the birth of Americans’ children — help grow the economy. They expand the labor force, boost retail sales, spike real estate values, fuel the stock market, and expand the number of companies. A growing economy can be good for all — but it is especially good for wealthy people who can invest in company stocks.

Yet every annual wave of immigrants also causes much economic harm to the roughly 220 million Americans (and recent legal immigrants) who work for a living, or who are educating themselves to take jobs in a few years.

Every new wave of legal immigrants and illegal migrants competes for existing jobs and force down Americans’ wages. The arrivals also expand poverty, reduce pressure on investors to buy productivity-boosting machines, drive up the price of good housing, and add congestion to K-12 schools and universities.

Immigrants, and especially visa workers, also push Americans out of careers and technological research, and they distort Americans’ politics by expanding cultural diversity and identity politics.

Over the last 30 years, since George Bush’s father signed a 1990 bill roughly doubling immigration, the government’s massive inflow of immigrants has kept Americans wages almost flat (until 2018) and so has turbocharged the U.S. stock market.

The establishment’s immigration policy has worked with free trade to shift much wealth from middle-class employees and the heartland states towards the stock market and the major coastal cities.

Trump was elected in 2016 to help reverse the establishment’s economic policy.

Since  2017, he has mostly stopped illegal migration, and he pushed wages up for blue-collars in 2018 and 2019. He has also trimmed legal immigration, and his April 22 policy sets the stage for incremental, significant reductions in the visa worker programs, such as the little-known B-1 and OPT visa programs.