A former lobbyist for India’s huge job-outsourcing industry is a top candidate to take over the Department of Homeland Security (DHS).

Chad Wolf worked as a lobbyist for NASSCOM in 2016 but may be picked by President Donald Trump to replace departing chief Kevin McAleenan, sources told Breitbart News.

For a reported price of $60,000, Wolf served as a lobbyist for NASSCOM in late 2016 when he was working for Wexler & Walker, a subsidiary of Hill & Knowlton Strategies advocacy group.

NASSCOM is now lobbying Congress to lift the “country caps” that curb their use of the H-1B work visa to put Indian graduates into Americans’ office jobs.

Utah GOP Sen. Mike Lee is pushing the outsourcing bill, and it would allow U.S. and Indians firms to reward 60,000 Indian workers a year with citizenship — if they agree to take Americans’ jobs at low wages. The bill would also encourage many additional Indians to take sweatshop jobs in the United States via the little-known OPT, CPT, B1, and TN work visas so they can compete for entry into the H-1B green-card program.

U.S. investors, Indian outsourcing companies, and the Indian government have put at least 600,000 Indians into U.S. college jobs — and also have sent at least one million more jobs to India — via this little-recognized “U.S.-Indian Outsourcing Economy”:

This expanding industry is having a huge impact on the salaries and job prospects of middle-aged American professionals, just as factory-job outsourcing had a huge impact on Americans in the Midwest.

In 2017, Wolf was picked to serve as chief of staff to DHS Secretary Kirstjen Nielsen. He got the job because he also worked at DHS for President George W. Bush, who promoted an “any willing worker” policy. The policy would have allowed U.S. employers to hire cheap workers from around the world. As Nielsen lost clout before being fired, Wolf shifted to a policy job at DHS.

Trump has several options for replacing McAleenan. The alternative candidates include Ken Cuccinelli, who now runs U.S. Citizenship and Immigration Services, and Mark Morgan, who is the acting commissioner of U.S. Customs and Border Protection.

Trump may also hire an outsider to help run DHS, which must build almost 500 miles of border wall before November 2020, even as it also manages the border, regulates the visa program, oversees the Secret Service, conducts diplomacy with Central American nation and also develop cyberdefenses against hackers paid by foreign governments. 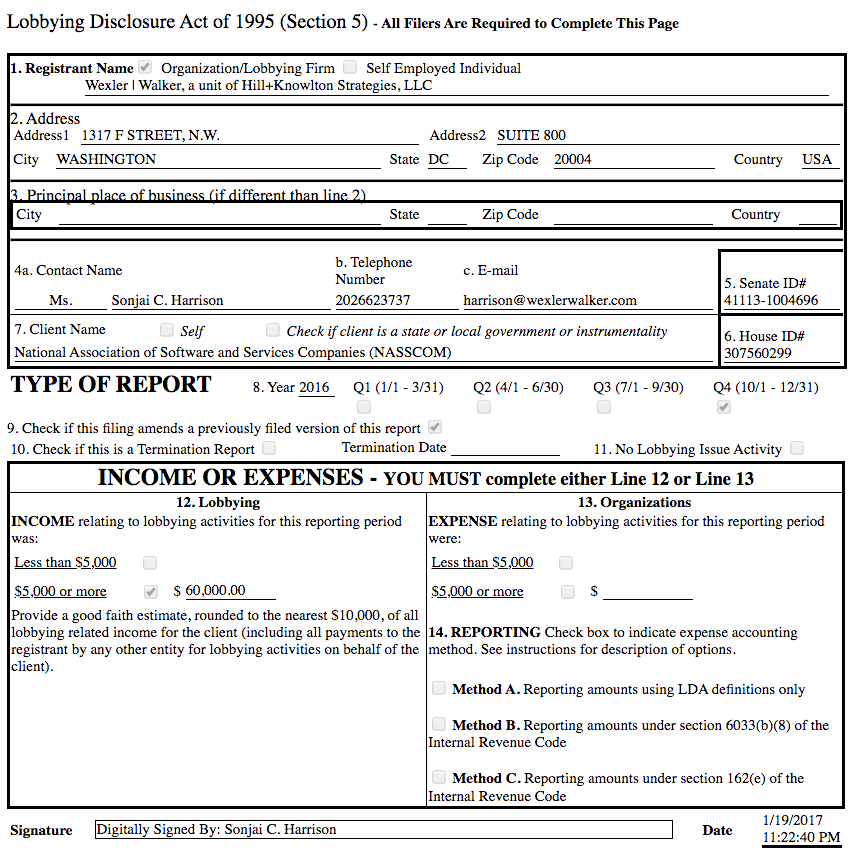 NASSCOM is important to India’s government because it brings tens of billions of dollars to India’s developing economy. In 2015, for example, India’s prime minister spoke at a NASSCOM celebration:

The group’s website says that “NASSCOM is dedicated to expanding India’s role in the global IT order by creating a conducive business environment, simplifying policies and procedures, promoting intellectual capital and strengthening the talent pool.”

This process is described in a new discrimination lawsuit against one of the Indian-owned outsourcing firms, Larsen & Toubro Infotech.

The firm won a technology support contract from Iconix Brand Group in New York. The support was managed by one American employee of Larsen & Toubro,  according to the lawsuit filed by the D.C. firm Kotchen & Low. The single American ran a New York team, which consisted of roughly eight Indians who likely arrived with H-1B visas, the lawsuit says. But the single American also ran a team of 20 Indians in India, and he reported to two Indian managers in India. So the visa programs allowed the Indian company to take roughly 30 good jobs from U.S. white-collar workers with just eight visas, according to the lawsuit.

The use of cheaper Indian labor created payroll savings for Iconix and profits for Larsen. In turn, those profits boosted the company’s stock values for U.S. investors, including the Vanguard Total International Stock Index.

Many major U.S. firms have outsourced work to India. For example, Walmart is also boosting its stock value by outsourcing 569 finance and accounting jobs in North Carolina to cheaper H-1B workers from India. If the company saves $10,000 per employee, Walmart will save $5.7 million per year. On Wall Street, Walmart’s price to earnings rate is 25 to 1, so the $5.7 million in payroll savings will boost its stockholders’ value by $142 million.

Walmart picked an American company, Genpact, to supply the foreign workers. The company is a spin-off of General Electric, and it prospers by providing Indian H-1B workers to many companies in the United States. For example, the company asked for 271 H-1Bs in 2018, 410 H-1Bs in 2017, and 307 H-1Bs in 2016. In 2018, Genpact also got 160 L-1 visas, which allow Indian employees to work in the United States at Indian-level wages.

Genpact’s $3.3 billion in revenue is enough to generate $7.5 billion in stock value for its investors, which include Bain Capital, BlackRock, and Charles Schwab Investment Management.

Walmart is hoping to expand into India, so it needs strong support from the Indian government as it competes with Jeff Bezos’s Amazon for shares of India’s huge retail market.

No GOP senator has denounced Lee’s bill, and the Trump administration has not said if the president supports or opposes the legislation:

Watch GOP Sen. Mike Lee publicly urge Indian contract-workers to lobby US Senators for a bill offering fast-track citizenship to Indian grads if they take jobs (at low wages) from US grads. No GOP Sen. has rebuked him & no anti-GOP journos 'pounce.' Weird. https://t.co/A5VOsuyOVt