President Donald Trump’s Department of Labor cheats many millions of American graduates by allowing employers to import foreign contract workers at below-market wages, says a May 4 report by the Economic Policy Institute.

Sixty percent of H-1B positions certified by the U.S. Department of Labor are assigned wage levels well below the local median wage for the occupation. While H-1B program rules allow this, DOL has the authority to change it—but hasn’t.

The labor department allows companies to import their foreign workers — mostly from poor India — under cheap, no-benefits contracts. This policy undercuts U.S. graduates who must earn higher salaries to pay off debts to expensive U.S. colleges, pay U.S.-level health insurance, and buy houses in U.S. districts made expensive by the annual inflow of immigrants.

The report urges the labor department to protect Americans by raising the minimum wages that must be paid to the visa workers:

The U.S. Department of Labor (DOL) has broad discretion to set H-1B wage levels, that is, the minimum wage employers must pay their H-1B workers, which corresponds to the H-1B workers’ occupation and the region where they will be employed. By law, DOL must set four H-1B wage levels—which it does according to wage survey data from the Bureau of Labor Statistics’ Occupational Employment Statistics survey. DOL has set the two lowest levels (of the four) well below the local median wage.

Changing program rules to require and enforce above-median wages for H-1B workers would disincentivize the hiring of H-1B workers as a money-saving exercise, ensuring that companies will use the program as intended—to bring in workers who have special skills—instead of using the H-1B as a way to fill entry-level positions at a discount.

We recommend that DOL use its existing authority to set the lowest (Level 1) wage to the 75th percentile for the occupation and local area and also require that wage offers to H-1B workers never be lower than the national median wage for the occupation.

Eugene Scalia heads the department of labor. The visa programs are overseen by the department’s Wage and Hour Division, which is now run by a former counsel for President Geoge W. Bush.

On April 22, Trump directed his deputies to recommend changes to the visa workes programs so that Americans can regain jobs as the economy recovers. Unsurprisingly, business groups oppose any curbs on the visa worker programs.

Roughly 53,000 employers use the H-1B outsourcing program, but most of the foreign workers are imported by a few Fortune 500 companies, according to the report.

… Half of the top 30 H-1B employers use an outsourcing business model to provide staff for third-party clients, rather than employing H-1B workers directly to fill a special need at the company that applies for the visa.

…  Among the top 30 H-1B employers are major U.S. firms including Amazon, Microsoft, Walmart, Google, Apple, and Facebook. All of them take advantage of program rules in order to legally pay many of their H-1B workers below the local median wage for the jobs they fill.

The elite employers use the program to undercut salaries for American graduates by using foreign contract workers at the lowest of the four levels. The report says: 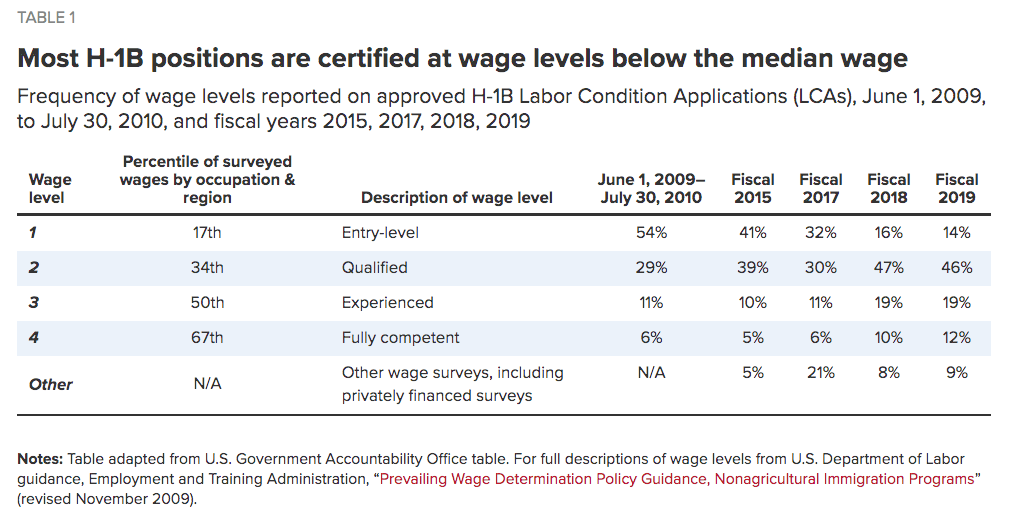 The report spotlights the potential for companies to spike their stock market value by slashing their payroll costs with an imported workforce.

But the EPI report ignores many hidden costs of the H-1B program that are also ignored by business groups.

For example, numerous Americans say the existence of this vast foreign worker population blocks many young Americans from getting starter jobs at Fortune 500 companies, reduces salaries for millions of U.S. graduates, and degrades Americans’ professional careers into a series of unstable monthly “gig” contracts.

These hidden costs are ignored by the Silicon Valley companies, whose many visa workers at helping them the competition against Chinese companies. For example, Eric Schmidt, one of the former H-1B advocates at Google, is  calling for a Valley bailout that would provide yet more H-1B visa workers:

Important trends are not in our favor. America’s lead in artificial intelligence, for example, is precarious. A.I. will open new frontiers in everything from biotechnology to banking, and it is also a Defense Department priority. Leading the world in A.I. is essential to growing our economy and protecting our security. A recent study considering more than 100 metrics finds that the United States is well ahead of China today but will fall behind in five to 10 years. China also has almost twice as many supercomputers and about 15 times as many deployed 5G base stations as the United States. If current trends continue, China’s overall investments in research and development are expected to surpass those of the United States within 10 years, around the same time its economy is projected to become larger than ours.

We should undertake major efforts to train up-and-coming scientists and engineers, and attract more global technology experts to the United States. A majority of computer scientists with graduate degrees working in America were born abroad, as were most current graduate students studying computer science in U.S. universities. They are a source of national strength. A vast majority want to stay and contribute to American innovation. We must make it easier for them to do so.

Trump’s directions to his agency leaders to reconsider the visa programs will start a fight within the White House as reforms try to get Americans into the Fortune 500 jobs and investors’ lobbyists try to protect their supply of cheap labor. Trump is expected to announce policy changes in early June.