The business partners of Hunter Biden, son of former Vice President Joe Biden, were investors in Fisker Automotive, a company that received over $500 million in loan guarantees from the federal government before failing, Breitbart News can reveal.

Fisker was granted the loan guarantees to produce a hybrid sports car called the “Karma” for the luxury auto market, with a price of $103,000. High-profile political figures lobbied for the deal. Fisker filed for bankruptcy failed in 2013 and taxpayers lost $139 million on the venture. Republicans noted: “The jobs that were promised never materialized and once again tax payers are on the hook for the administration’s reckless gamble.”

Along with failed solar panel manufacturer Solyndra, Fisker was one of the highest-profile failures of the stimulus, which Biden oversaw, and which he has touted on the campaign trail as proof of his ability to handle America’s economic recovery.

Moreover, Vice President Biden admitted pushing for Fisker to build its new “Karma” plant in his home state of Delaware.

What was unknown at the time was is that Biden’s son, Hunter Biden, was in a business partnership with Devon Archer and Christopher Heinz, whose own investment funds would later be shown to have a stake in Fisker.

Breitbart News has reviewed documents showing that “Rosemont” funds were listed as investors in Fisker and creditors of the company.

Hunter Biden is not listed in the filings for these companies.

According to an archived version of Rosemont Seneca’s website, Devon Archer’s bio once boasted of his role in “leading” investments in Fisker. His bio appeared right above that of Hunter Biden. 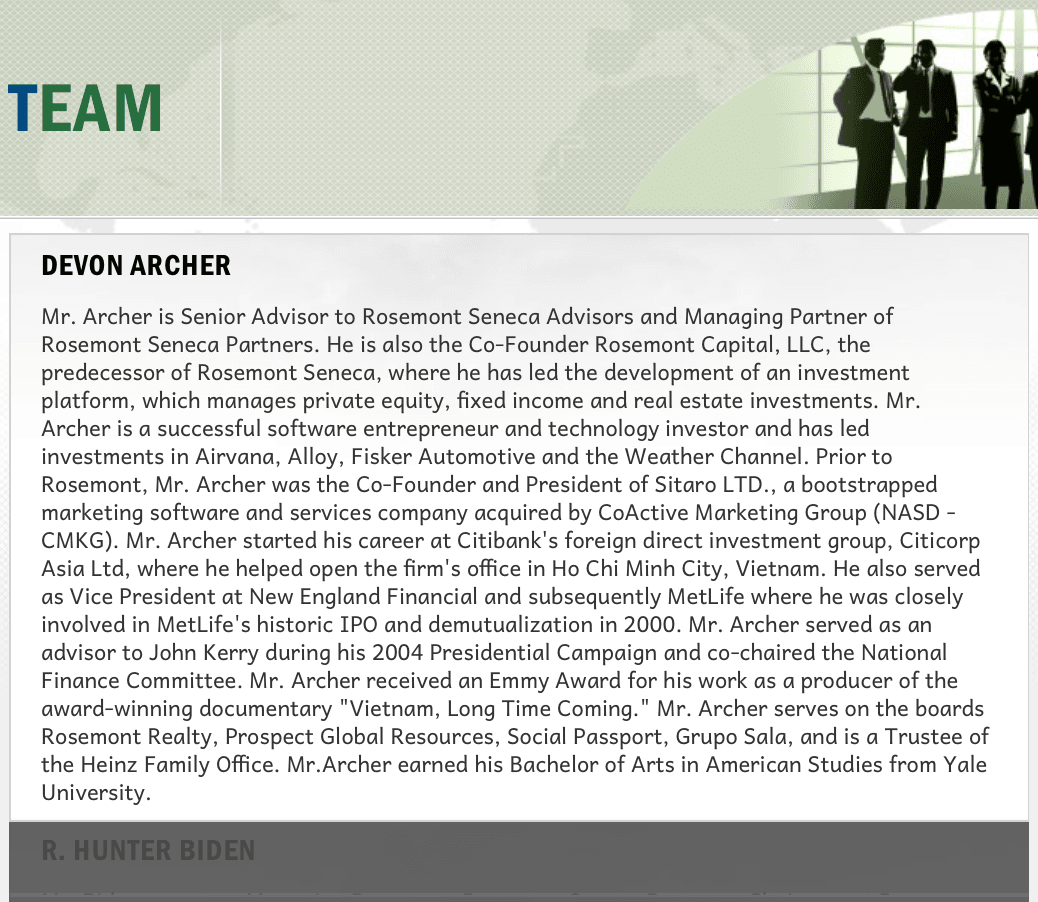 Rosemont Capital also had a stake in Rosemont Seneca. As the Washington Examiner reported last year:

Biden, Heinz, and Archer incorporated Rosemont Seneca Partners in Delaware on June 25, 2009. The “alternative investment and market advisory firm” was an offshoot of Rosemont Capital, which held a 50% stake in the new venture. Rosemont Seneca and Rosemont Capital shared the same office address in lower Manhattan and the same New York phone number, according to Securities and Exchange Commission documents.

Hunter Biden, as an individual, is listed among Fisker’s creditors — a fact that was noted in contemporaneous media reports when Fisker filed for bankruptcy. It is unknown why. He might simply have put money down for an undelivered car: he declined, at the time, to comment.

Vice President Biden denied pushing for the loan guarantees, but admitted lobbying for Fisker to build its new “Karma” plant in his home state of Delaware.

The Wall Street Journal reported: “A spokeswoman for Mr. Biden said that he had made no direct appeals to DOE [Department of Energy] on Fisker’s behalf before the loan was approved, though he did talk to the company several times afterward to put in a plug for his home state.”

However, that promise was broken.

As Breitbart News noted: “Fisker produced exactly zero cars in the U.S. Instead, it produced its first cars in Finland. In addition to the losses for the federal taxpayer, Delaware had committed over $20 million to the deal by the time the company filed for bankruptcy in 2013.”

A request for comment from the Biden campaign last week went unanswered.