FRANKLIN, Tennessee — One of Tennessee’s top restaurant representatives and the owner of a historic restaurant chain says his business is already built back better thanks to the state’s “forward-thinking politicians.”

Andy Marshall, CEO of A. Marshall Hospitality, the company that owns Puckett’s Grocery & Restaurant, detailed reasons he believes Puckett’s six restaurant locations are thriving after the hospitality industry was hit harder than any other industry in 2020.

“We had a lot of forward-thinking politicians in Tennessee, our governor, our senators, our Congress people, all working to try to help us balance the pandemic and the economics of opening and making sure we kept our employees employed,” Marshall said.

The middle-Tennessee eatery has become a staple among locals and tourists, and in addition to smaller-name musicians, country stars like Keith Urban and Vince Gill have graced the restaurants’ stages. Marshall’s interview, which took place at his Franklin location, came on the same day Breitbart News interviewed Sen. Marsha Blackburn (R-TN) at the restaurant as part of Breitbart News’s On the Hill series. 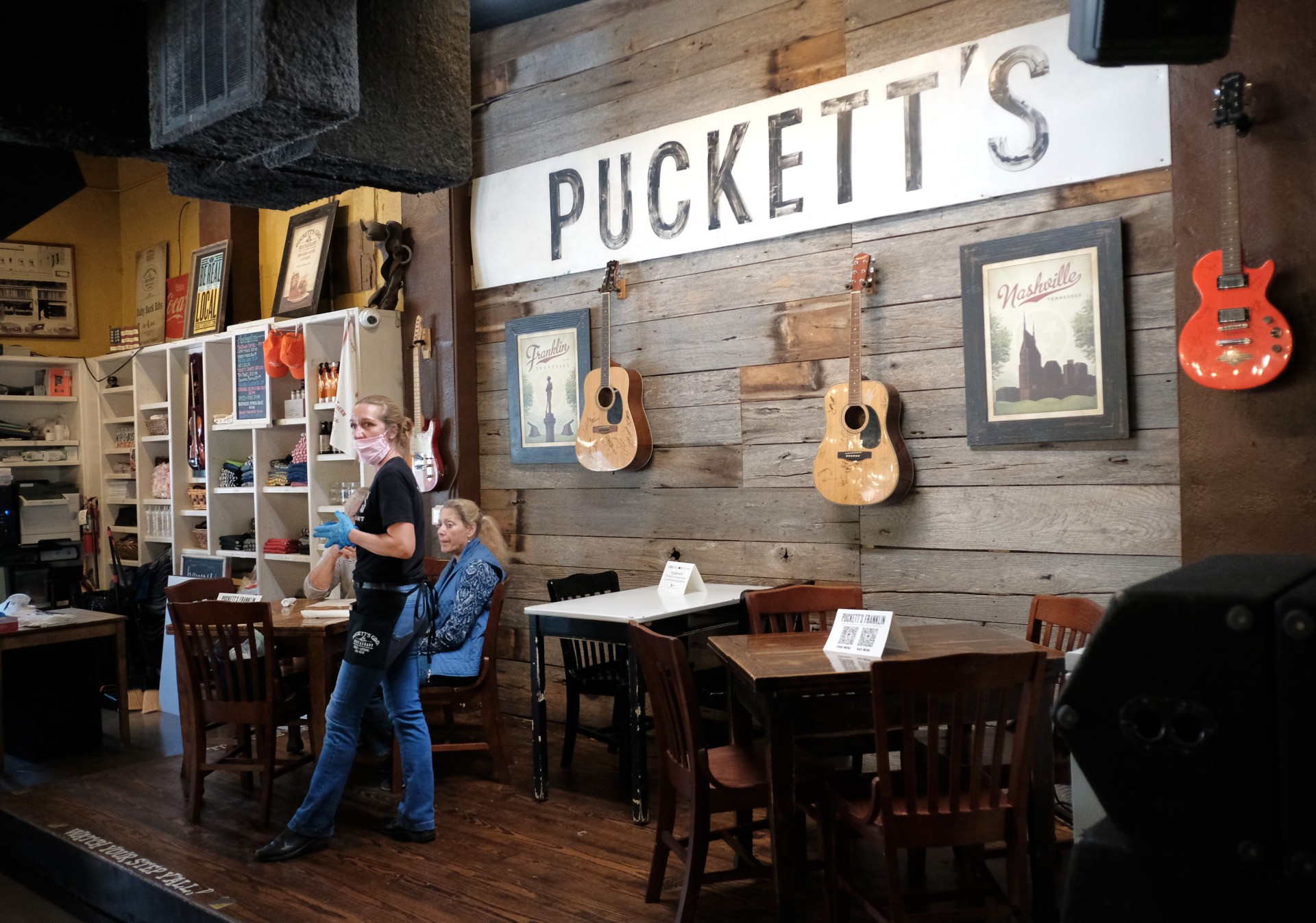 A waitress takes orders from patrons at Puckett’s Grocery & Restaurant in Franklin, Tennessee. Tennessee is one of the first states to reopen restaurants after the onset of the pandemic. (Jason Kempin/Getty Images)

Marshall specifically noted Gov. Bill Lee (R), who announced in May he was terminating the state’s use of the extra $300 per week federal unemployment benefit early.

“I give a lot of credit to our governor. First of all, he asked questions. He formed groups to talk about it. I was asked to be on an economic recovery group, a subcommittee for restaurants,” said Marshall, who also heads the Tennessee Hospitality & Tourism Association and is a leading advocate for restaurants in his state.

The Department of Labor’s June jobs report showed signs that ending the extra weekly federal benefit was contributing to recovery. As of the beginning of the month, 26 states, all Republican-led with the exception of Louisiana, had announced they did end or planned to end the $300 per week program early. Breitbart News’s John Carney pointed to an increase in workforce participation in prime-aged workers and an increase in reentrants to the workforce as two indicators on the jobs report that scaling back federal benefits was working.

An American Action Network survey of 1,009 registered voters, conducted June 22–29 in 51 battleground congressional districts, reinforced the notion as it summarized, “Conservatives have clear winning arguments over liberals on economic issues and concerns. Rising prices and inflation are the cornerstone of this economic argument, with a secondary element focused on the labor shortage due to the Democratic-pushed extended unemployment benefits.”

Lee said May 11 he was ending the use of federal coronavirus-related unemployment programs “because Tennesseans have access to more than 250,000 jobs in our state. Families, businesses and our economy thrive when we focus on meaningful employment and move on from short-term, federal fixes.”

Marshall also commended Tennessee’s congressional delegation, which is almost entirely Republican, for placing emphasis on business recovery. He said they acknowledged to him, “We can’t just shut down our economy.” He told Breitbart News his sales in recent weeks have been soaring, up 18 percent over 2019. 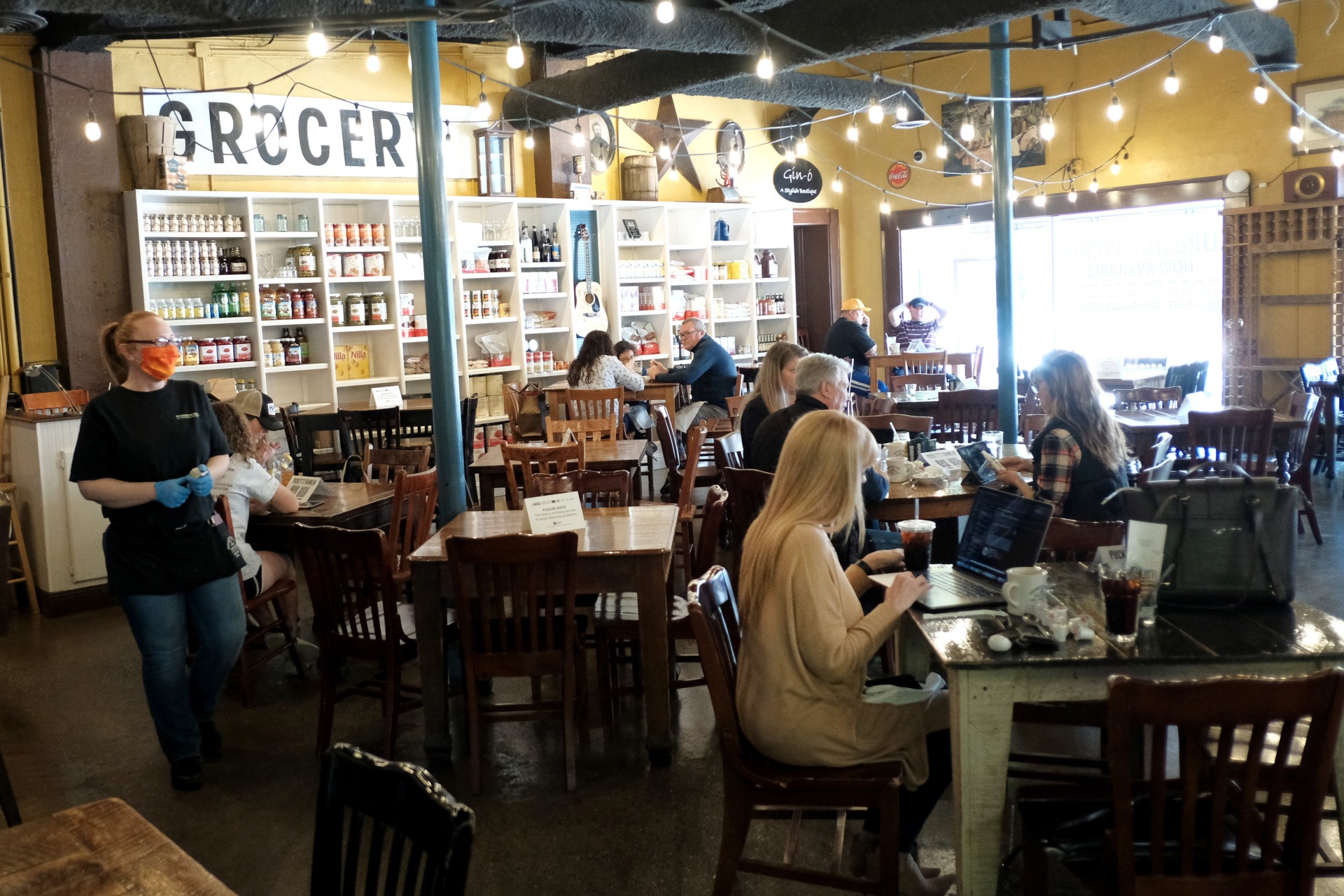 The interview in June with the Tennessee restauranteur comes amid a series of devastating economic indicators on a national scale for Biden’s agenda, including skyrocketing inflation and the worst stock market selloff of the year, which occurred Monday.

It also comes as former Vice President Mike Pence in his first exclusive interview since leaving office told Breitbart News in Iowa that Biden’s policies are dampening what was a strong recovery from the pandemic that began under former President Donald Trump.

“The extension of, the plus-up on unemployment benefits by the Biden administration has worked a real hardship on small businesses and our recovery,” Pence said in the interview. “Look, this economy started to recover in the summer of 2020. … With tax cuts, and rolling back regulations, and unleashing American energy, and America First trade deals, we had laid a foundation within the first three years that created seven million jobs. I believe it also was the foundation on which America has made this historic recovery, and in so many ways what the Biden administration has done and continues to do — and adding to that they’re pushing for the largest tax increase in 50 years to pass the largest spending bill in American history — I think what the Biden administration is doing threatens to short-circuit the American recovery we all long to see and that is underway. It is. But I think the fact that inflation is now rising at the most rapid pace in 13 years is evidence of the fact that markets are starting to respond to the big government solutions — higher taxes, more regulation — being planned and coming out of this administration. That’s why we got to fight back and fight back hard.”