Shipping costs are surging around the globe, causing the price of sending a container from Asia to the West Coast to increase many times over.

When Donald Trump was president in 2020, the price to ship a container from Asia to California was $3,800. That price spiked to $17,000 in October of 2021, according to supply chain technology company Freightos.

Freightos also revealed that shipping to the east coast is more expensive than the west coast, with rates reaching $20,000.

The increase in shipping cost is primarily due to the supply chain crunch, which is jamming seaports, trucking companies, and warehouses. 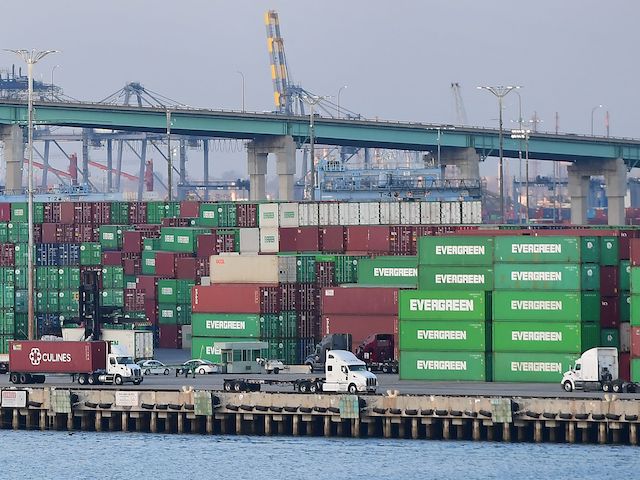 More than 100 ships were reported this week to be anchored off the coast of California while waiting their turn to dock and unload full containers. But the seaports are stocked so high that ports are forcing vessels to wait up to two weeks before unloading.

The delay in unloading the containers at the ports delays the ships’ return voyage to Asia to collect more containers for the next shipment, which only backlogs ports in Asia and further delays the flow of goods to the United States.

The large number of containers piled at American docs is primarily due to the low supply of truck drivers. President and CEO of the American Trucking Association told CNN on Tuesday the supply chain crisis is short 80,000 drivers, a “record high.”

The association also conveyed the demand for truck drivers in October is 30 percent more than it was before the pandemic began.

Even if there were enough truck drivers to move the containers from the seaports, available warehouses are becoming more expensive and rare, further driving up the cost for consumers to receive goods.

President Joe Biden has responded to the supply chain crisis by demanding a few ports remain operational for 24 hours a day. Yet many endpoint destinations are closed during the night, so truckers are not able to deliver the containers until the morning. 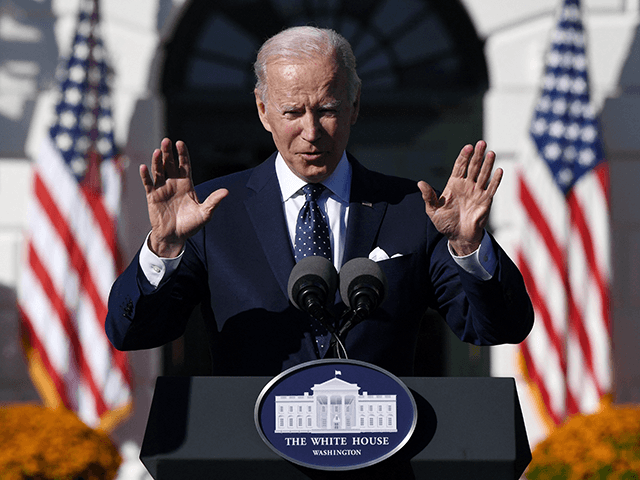 US President Joe Biden speaks during an event honoring the Council of Chief State School Officers’ 2020 and 2021 State and National Teachers of the Year on the South Lawn of the White House in Washington, DC, on October 18, 2021. (Olivier Douliery/AFP via Getty Images)

Biden’s plan may have unintended consequences, however, as truckers are dropping containers in residential neighborhoods near the seaports. “UCTI Trucking Company, located in Wilmington, California, only has the capacity of holding 65 containers, the report said,” Breitbart News reported. “As a result of limited space, the trucking company has been lining the streets of the nearby neighborhood in front of the homes of nearby residents.”

While trucking companies are dropping freight in the wrong locations, absent from stores and customers, Transportation Secretary Pete Buttigieg has also been absent from his post. Buttigieg has taken paternity leave since mid-August with his husband and two children. Buttigieg’s absence has been defended by the White House while they weigh whether to deploy the National Guard to confront the crisis.