Saudi Arabia’s Minister of Human Resources and Social Development, Ahmad bin Sulaiman al-Rajhi, issued a ministerial decision on October 24 “restricting work to Saudis in the professions of secretarial, translation, stock keeper and data entry in all regions of the Kingdom.”

Al-Rajhi said he chose to “localize marketing professions at a rate of 30 percent for establishments with five or more employees, which will come into effect on May, 8, [2022],” Al Arabiya relayed.

The action serves as a “continuation of the Ministry’s efforts to provide an appropriate and stimulating work environment for male and female citizens, and to expand the circle of their participation in the labor market,” the state-run Saudi Press Agency (SPA) reported.

The nationalization of Saudi marketing jobs is the latest policy implemented as part of the Kingdom’s “Vision 2030” initiative. Riyadh launched the project in 2016 to help reduce Saudi Arabia’s dependence on petroleum, diversify the Kingdom’s economy, and develop Saudi public service sectors.

“A key focus for Vision 2030 is in creating an environment that unlocks business opportunities, broadens the economic base, and creates jobs for all Saudis,” the development program’s official website states.

“Saudi Arabia now has the lowest dependence on foreign labor among GCC [Gulf Cooperation Council] countries at about 77 percent, while Qatar has the highest at about 94 percent,” Arab News reported on July 8 citing data from S&P Ratings.

The GCC is an economic and political union comprised of Saudi Arabia, the United Arab Emirates (U.A.E.), Qatar, Kuwait, Bahrain, and Oman. Many of the GCC member states are known outside of the Persian Gulf region for employing high percentages of migrant workers.

The Persian Gulf region employed 23 million migrant workers as of this month, according to an estimate published by Reuters on October 21.

“Migrants in the Arab states [of the Persian Gulf region] sent home over $124 billion in 2017, with UAE, Saudi Arabia, Kuwait and Qatar all in the top 10,” the news agency recalled, citing data from the International Labour Organization. 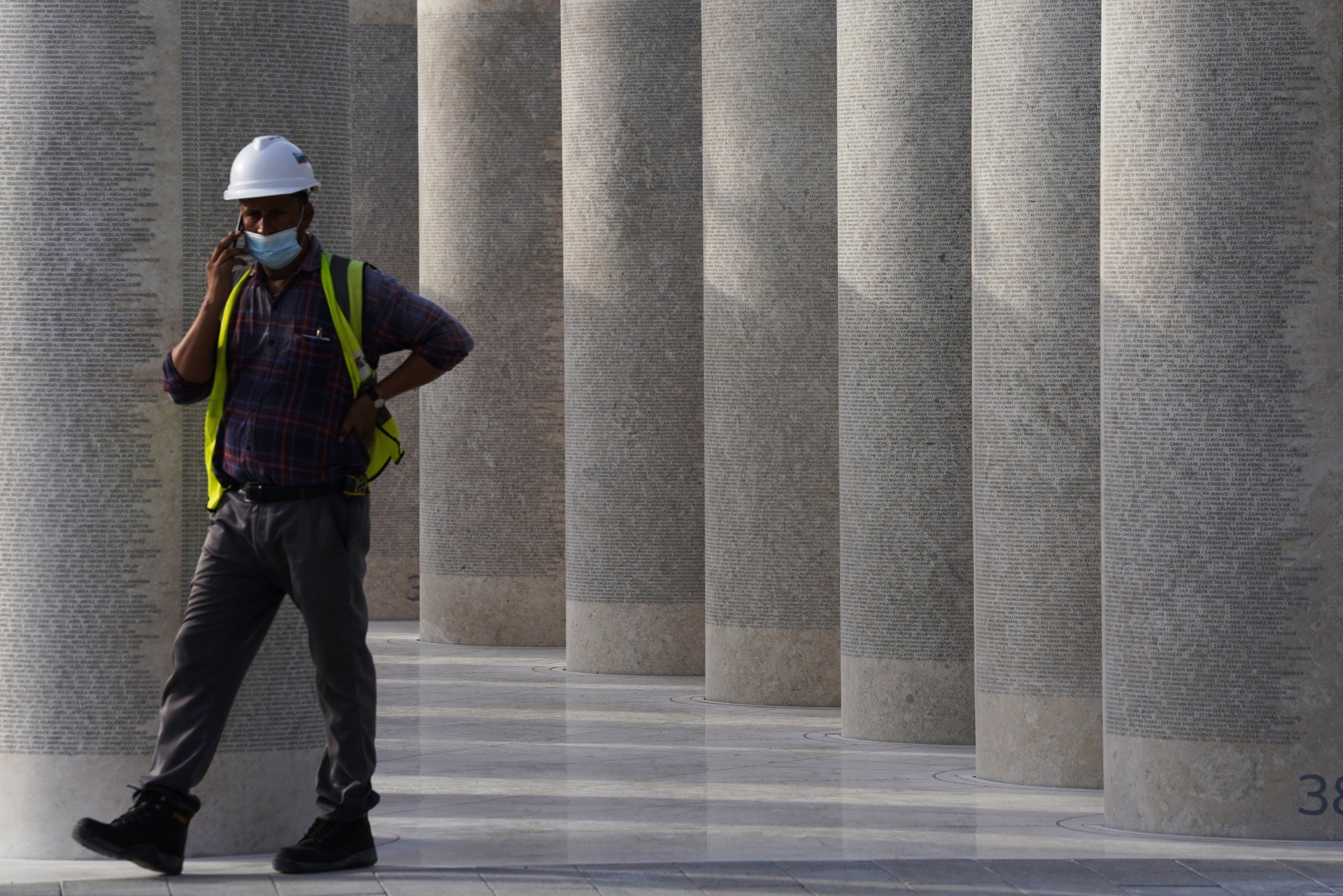 A worker talks on the phone by an installation honoring the foreign laborers who built Expo 2020 in Dubai, United Arab Emirates, Sunday, Oct. 3, 2021. Dubai’s Expo 2020 on Saturday, Oct. 2, 2021, offered conflicting figures for how many workers had been killed on site during construction of the massive world’s fair, first saying five and then later three. In a later statement, Expo apologized and described the initial figure as a “mistake.” (AP Photo/Jon Gambrell)

“Qatar … maintain[s] some restrictions on changing jobs or bans on migrant labour unions, according to the Business and Human Rights Resource Centre, which promotes human rights in business,” the news agency observed.

“Another report by the [Saudi] National Labor Observatory in April this year indicated that Saudization in the private sector rose to 22.75 percent in the first quarter, compared to 20.37 percent during the same period last year,” the Riyadh-based newspaper observed.

“Seven major private-sector job groupings [in Saudi Arabia] have achieved Saudization of more than 50 percent,” Arab News continued. “While the rate across the private sector as a whole is around 25 percent, Al-Eqtisadiah newspaper reported that the finance and insurance sectors had achieved a rate of 83.6 percent.”

“This was followed by public administration, defense and mandatory social insurance at 71.9 percent, mining and quarrying at 63.2 percent, education at 52.9 percent, and information and communications at 50.7 percent,” the publication added.