Our government dare not promote a national religion that refers to a traditional notion of God. We are collectively trained to avoid pushing our values onto others largely because relativism claims that there are no transcendent moral truths. But where we empty our lives of one religion, we don’t embrace neutrality, we just put some other dogma on the throne and claim “the debate is over.” 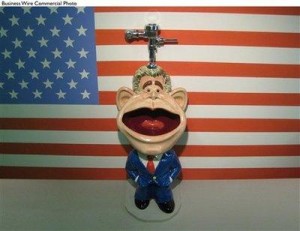 The worship and love of materials is our nation’s religion. I’d say it was a new religion, but it’s actually the oldest religion in the world, Paganism. Judeo-Christian values came from a pagan world with a radical new concept: the Creator, not the creation, should not be worshiped.

Recent leftist hysteria demands the removal of formal religion from public life. But they snuck in a new absolute for which we are not to argue. There’s no “true for you but not for me.” when it comes to the dogma of Global Climate Change. If someone tells me I have to change the light-bulbs in my house or I’m a bad person, I cannot reply, “Who are you to judge?” Their answer will likely start with something like, “Science says…” or “Everyone knows…” or a standard ad hominem like “racist,” “homophobe,” “anti-science,” or “Bible-thumper.”

My children aren’t allowed to hear about God in public school, but my seven-year-old daughter brings home Earth Day bullshit propaganda that instruct children to tell their parents to change light-bulbs, turn off lights, and re-use shopping bags. When my daughter obeys the national religion’s mandate I tell her, “Those aren’t our values. That’s not our religion. We don’t fear capitalism, and we pay for the energy we use. We believe in a God that is not the creation.”

I’d like to announce that Saturday, March 29th 28th from 8:30pm to 9:30pm local time is Creator Hour! We will make a statement that God’s illumination is the ultimate hope for mankind by turning on every light in the house for that one hour. Let your pagan neighbors self-flagellate themselves by depriving themselves of light. We need to make up for their lack of illumination by turning on yard lights, garage lights, maybe even start up the fireplace.

The Earth Hour website calls for us to “Vote Earth,” but I intend to cast my ballot for the other party: Vote Creator! Turn on the lights and show the pagans that illumination, inspiration, capitalism, creativity and sobriety in the face of hysterics is how we conquer our problems.

So, if you also have a higher opinion of the Creator than you do of fear-mongers, join me and turn on every unnecessary light you can from 8:30 to 9:30pm on the 29th 28th. I’m turning on my pool lights, I’ll light some tiki torches, and I’ll probably leave the fridge open for that hour just to make sure my carbon production offsets the liberal church-ladies shoving their religion down my throat.