In the story below this update, Roseanne seems to express some remorse over Tweeting the address of Zimmerman’s parents.

But here’s a fairly recent tweet where she threatens to re-tweet “his address again” and “maybe go 2 hs house myself”: 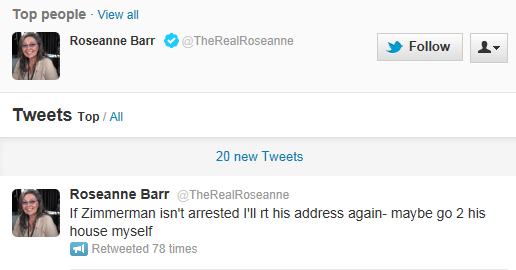 The Left is losing control of this narrative and, as a response, doing what they always do: completely freaking out.

The comedian Roseanne Barr last night tweeted the home address of George Zimmerman’s parents to her 110,000-plus Twitter followers, only to delete the posting after “not fully understanding that it was private not public.”

Barr’s posting of the correct Florida address of Robert and Gladys Zimmerman came at the same time Spike Lee was issuing an apology for erroneously disseminating a tweet that purportedly contained the home address of George Zimmerman, who last month killed teenager Trayvon Martin.

The residence cited by Lee is actually the home of an elderly couple with no connection to Zimmerman.

Barr, who deleted her tweet in the face of criticism from some Twitter followers, noted that she first thought it “was good to let ppl know that no one can hide anymore.” That stance quickly changed, with Barr reporting, “But vigilante-ism is what killed Trayvon. I don’t support that.”

Full-blown inciting of mob violence … and against a Hispanic Democrat, no less.