The first details of Call of Duty: Advanced Warfare’s multiplayer were revealed on Monday at the Gamescom video game convention in Germany, but will the changes to the series’ well-worn gameplay be enough to entice gamers who have tired of the Call of Duty franchise?

There were plenty of new elements revealed and discussed for the latest iteration of Activision’s annualized Call of Duty first-person shooter series, with Advanced Warfare being the first time developer Sledgehammer Games has taken the lead on development duties. While details on the singleplayer campaign had been previously revealed at E3 (Electronics Entertainment Expo) in June, information about the game’s multiplayer had been closely guarded up until this point. Following a trailer showing gameplay from a number of the game’s multiplayer maps, Sledgehammer Games co-founders Glen Schofield and Michael Condrey demonstrated and detailed key points of Advanced Warfare’s multiplayer during the press event.

Leading off the new features were details about the key component to changing the base gameplay of the Call of Duty franchise: the exoskeleton. Players will be able to rocket jump into the air, use jets to quickly dash in different directions both on the ground and while in the air, and slam towards the ground to land on top of and damage enemies using the abilities of the exoskeleton. Sledgehammer “rethought how we build” the multiplayer maps to accommodate these new abilities, Schofield said, adding an increased degree of verticality to the level design. In addition to adding more complexity to the map layouts, the multiplayer levels each had a distinct environmental event affecting all players. For example, the Defender map sees players fighting among a bunker complex at the base of the Golden Gate Bridge that is swept with a giant tsunami at one point in the map, creating a deadly wave swell that leaves parts of the map flooded after crashing into the shore.

In addition to the exoskeleton, Schofield and Condrey detailed some of the advanced weapons and equipment that players will be able to utilize while playing online. While the previous two entries in the Call of Duty series have given players access to near-future technology like personalized attack drones and motion sensors, Advanced Warfare will include laser weapons, wrist-mounted explosive devices, cloaking fields, automated gun turrets, enemy-seeking grenades, and devices that allow players to see enemies behind walls. Players can choose which weapons and equipment they’ll use with customized loadouts using the game’s “Pick 13” system, in which they will have a number of points to spend on weapons, perks, tools, and skill streak rewards to combine for their character. 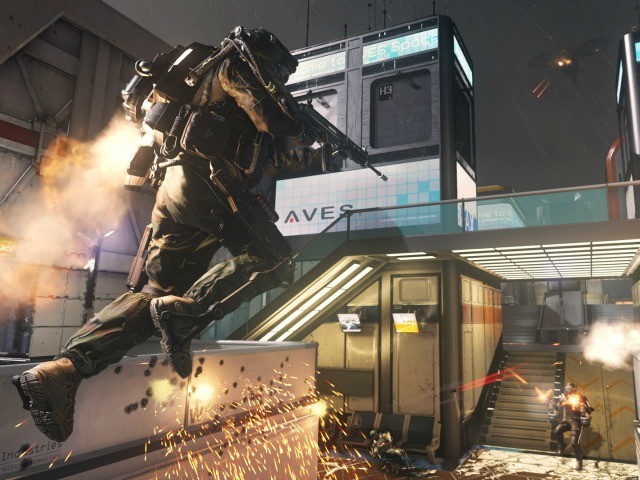 Skill streaks, powerful rewards granted to players for successive points earned without being killed, will also be customizable, with players able to add different features to make them more deadly and versatile. In the demo, Schofield showed how he could add rockets to his automated gun turret, turning it into a powerful missile turret. Additionally, he was able to give the launching mechanism the ability to be detached from its base, allowing him to remove it from its stationary position and walk around the map with a destructive missile launcher. Skill streaks will also include a co-operative element, as demonstrated when Schofield and Condery both took control of a powerful aerial gunship, with one manning the craft’s chainguns and the other marking targets and firing rockets at enemies.

Other key points from the press conference included the announcement of 12 different multiplayer modes, tools for e-sports competitions, and that those who pre-order the game will have early access to the game the day before it officially launches, called “Day-Zero Edition.”

There’s certainly a lot new to Advanced Warfare to set it apart from previous entries in the Call of Duty franchise, at least new for the series; a number of the innovations in the gameplay and design of Advanced Warfare seem to be cribbed from the series’ competitors. The environmental effects are reminiscent of the “Levelution” feature found in last year’s Battlefield 4, while the futuristic setting, expanded freedom of movement, and various perks and equipment directly mirrored many of the key features of Respawn Entertainment’s Titanfall earlier this year. (Interestingly, Respawn Entertainment was founded by the creators of the Call of Duty franchise after they were unceremoniously fired by Activision, the series’ publisher.) The boost jumping and dashing of Advanced Warfare, along with the focus on more open and vertical level design, looks to mimic the jump jets and wall running featured prominently in Titanfall as players traversed multi-leveled multiplayer maps. Even some of the equipment shown, like the cloaking device and ability to temporarily enhance a players running speed, are direct analogues to tactical abilities from Titanfall. At first glance, the only thing that seems to be missing are the eponymous Titans, massive player-piloted robots launched from space and dropped onto the battlefield, of Respawn Entertainment’s hit shooter, but then it was revealed one of the skill streak rewards in Advanced Warfare is the “Goliath”… a large, player piloted robot that drops out of the sky when summoned by the player. 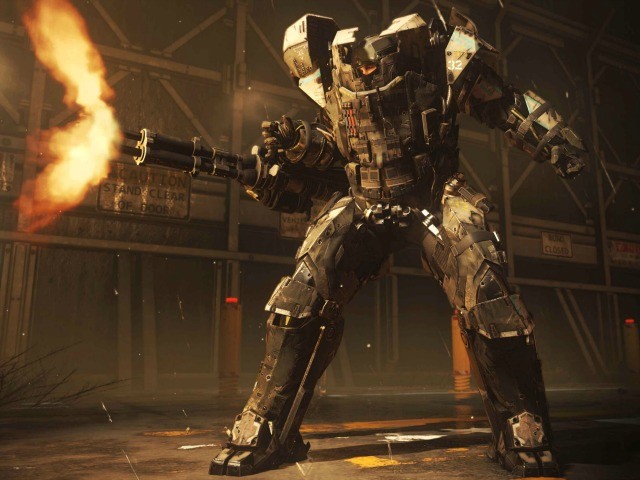 Still, Sledgehammer claims Advanced Warfare has been in development for three years, so it’s hard to know how much of these similarities are a direct response to their competitor or just a happy-accident of the concurrent development cycles. Regardless, for a series that has been accused of stagnation as a consequence of its yearly release schedule, copying the best elements of other shooters and marrying them with the Call of Duty series’ proven gunplay and deep character customization hardly seems like the worst idea. Whether or not those unique elements of Advanced Warfare will be enough to convince players who have already experienced many of these same “innovations” from their competitors’ games is still yet to be seen.