It’s been 9 years since co-directors Robert Rodriguez and Frank Miller brought us the original “Sin City.” Like Marv dealing with frat boys, “Sin City: A Dame to Kill For”  simply shrugs that off with rampaging violence, bursts of white blood, sexy gals, and revenge served in black and white neo-noir with startling shards of color.

Some who survived the previous Basin City bloodletting return. Some fresh troubled souls arrive. The “Matrix”-like sense of wonder that came with the hyper-stylized visuals of the original is gone. But thanks to a more grounded story and two fantastic villains, “A Dame to Kill For” is superior to its predecessor. 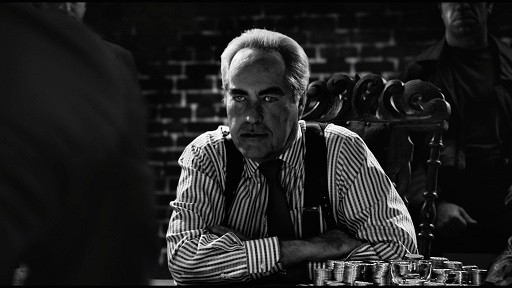 If you were as disappointed as I was over how little Powers Boothe was given to do in the original, “Dame” makes up for it by bringing his powerful, gleefully corrupt Senator Roark front and center. I’d crawl over glass to watch Boothe play a swaggering sociopath. That alone is worth the price of admission.

Although “Dame” is tightly wrapped around its predecessor, I’m not going to rehash the entire “Sin City” plot (you’re welcome). What you need to know is that after killing himself to protect Nancy (Jessica Alba) from Roark, Hartigan (Bruce Willis) is now a ghost. Nancy’s still an exotic dancer and Roark is now a nightly backroom customer playing high stakes poker with his cronies and any patsy who wants in.

Inconsolable over Hartigan and enraged by the sight of Roark’s smug, satisfied face, Nancy’s hitting the bottle to screw up the courage to off him. Always there, always by her side, is Marv (Mickey Rourke). There’s only room in this murderous, brain-addled, nihilistic hulk for one small soft spot. Nancy now holds it. It’s paternal, not sexual.

Let me stop for a sec…

Yes, your memory is correct. Marv was executed in “Sin City.” Don’t try to make sense of which of the four “Dame” chapters is set before or after the six “Sin City” chapters. Just go with it. 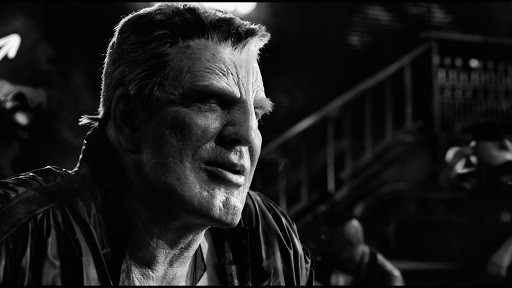 Dwight McCarthy is back. This time he looks like Josh Brolin, not Clive Owen. Dwight hasn’t seen Ava Lord (Eva Green) in a year, which is all the time he needed to fool himself into believing she doesn’t hold his soul in the palm of  her hand. Ava’s come back and she’s sorry and she’s always loved him and if Dwight will just kill her abusive wealthy husband and chauffeur/bodyguard (Dennis Haysbert), they can be together forever.

The weakest storyline involves Johnny (Joseph Gordon-Levitt) as a cocky gambler determined to humiliate Roark at his own game — poker. Johnny is an idiot whose motivations are all over the place. This isn’t completely the fault of Rodriguez and Miller. Most people don’t know this, but there’s a law that requires Gordon-Levitt play a role in every movie. (For a time there were similar laws about Michael Caine and Gene Hackman.) In order to comply, it looks as though the part of Johnny was shoe-horned in. 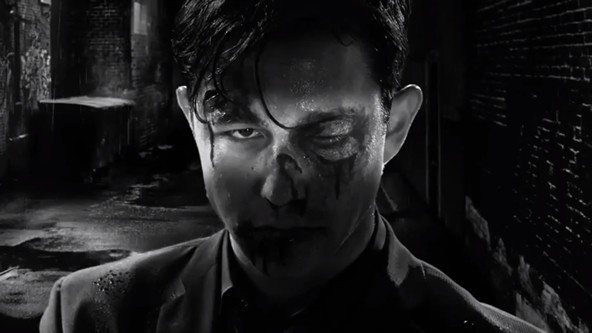 The real star of “Dame” is unquestionably the Dame, Eva Green. Ava Lord combines the femme fatales of “The Maltese Falcon,” “Double Indemnity,” and “Body Heat” into something sexy, evil and altogether beguiling. Green is so bewitching you never doubt Ava’s ability to manipulate good men into doing wicked. Green’s womanly beauty (she’s naked most of the time) is only part of the package. What the actress does with her voice alone is enough to make you want to leave your wife and kids in Baltimore, Jack.

“Dame” is a toned-down and less grotesque than “Sin City,” which is a good thing. Children aren’t part of the mayhem this time either, and that’s even better. There’s still some torture, self-mutilation, and visceral violence, but the elements that made you want to take  a shower after screening “Sin City” have been removed. This makes for a better time and a better movie. 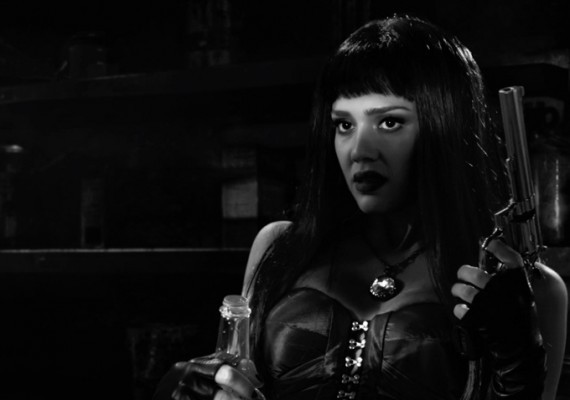 Boothe and Green are also head and shoulders above “The Yellow Bastard” and whatever that thing was Elijah Wood played. Hostility towards religion has also been replaced with something close to a grace note.

I’ve never bought the notion that this franchise is nihilistic. You have to look at the full context. Sin City and its neighborhoods like Old Town are lawless pits of despair and violence. The “Sin City” films are about a moment of selfless heroism emerging from that morass.  They’re also the only two decent movies Rodriguez has made in nearly 20 years.