On Saturday, May 9, veteran actor, singer, and Breitbart contributor Robert Davi, will be playing a very special concert at the historic Avalon in Hollywood to mark the 100th birthday of America’s greatest perfomer: Frank Sinatra. Davi will be accompanied by a 30 piece orchestra as well as many special guests.

Breitbart News caught up with Davi who gave us some insight into his passion for Sinatra as well as a preview of this very special performance that is being called The Event.

RD:  On May 14, 1998 — The Voice, Francis Albert Sinatra passed. He inspired millions of people around the world. This year marks his 100 anniversary — For 10 decades he has remained relevant and his Voice is as strong as EVER. But he was more than a Voice. He was the first Super Star to come out against Anti-Semitism and Racial bigotry. He fought for Civil Rights when it was unpopular to do so. He understood prejudice and as a son of Italian immigrants, he made us all proud to be Americans and gave us pride in our Heritage. His unspoken works of Charity were legendary. Although a man of many sides, the one I celebrate is the one whose contribution to music and society will last way beyond all the gossip of his rich, complex life. This Saturday at the Avalon in Hollywood, once the fabulous Hollywood Palace, I will be drawing from The Great American Song Book, what I call The Shakespeare of America.  Joining me will be my dear friends, Deana Martin , Rich Little , Gary Bryan and Dave Damiani to help pay homage to the Heavyweight Champ of Entertainment: Frances Albert Sinatra. I chose this Saturday because it is the eve of Mothers day and in my life, Frank Sinatra’s and all of our lives, our Mothers, Wives, Daughters, Sisters, are the Heart of the Family . So to all you women — who love deeply and sometimes do not feel appreciated…This night is for you. 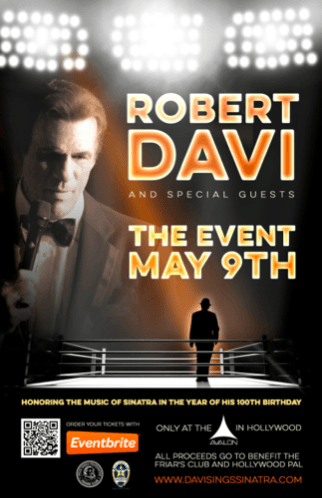