Mad Max (Tom Hardy) has truly gone mad. Groomed like a caveman, and seemingly able to communicate only in grunts; figuratively, our Road Warrior has become the Feral Kid. He eats two-headed desert lizards alive and drives through an endless wasteland without purpose. The world that was is now so far gone, nothing left is recognizable — except the vehicles, including Max’s now iconic Pursuit Special. What really drives Max, though, are regrets come to life as demons, not a machine.

Without giving away too many plot points, the first act of “Fury Road” is spent in a fascinating dystopian society of physically deformed and mentally warped haves, and desperate have-nots. The mad asylum (a wonder of imagination, detail and production design) is run by the tyrannical warlord Immortan Joe (Hugh Keays-Burn) and his cult of deadly War Boys. For her unique resourcefulness and scavenging skills, Imperator Furiosa (Charlize Theron) is revered in this warped society. 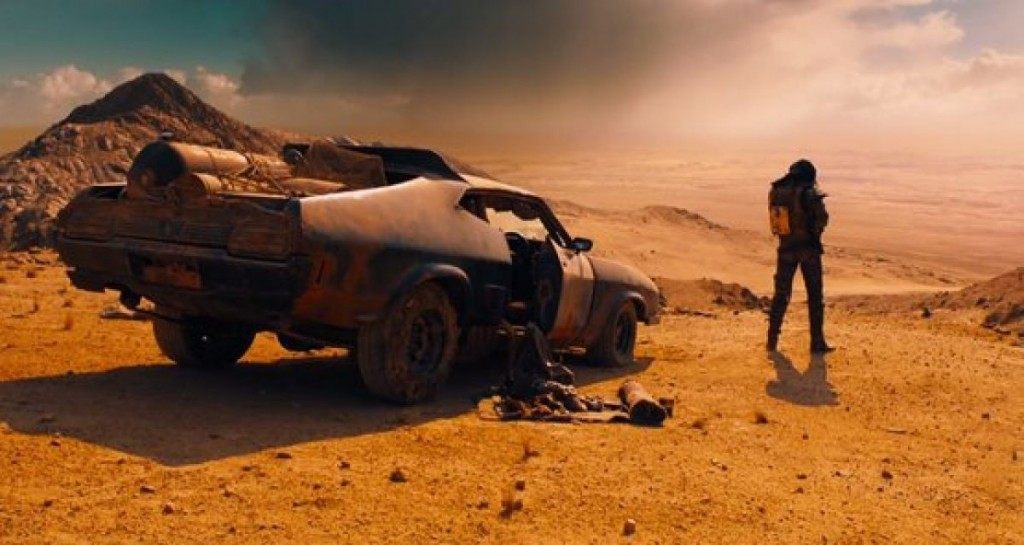 Like a celebrated Roman general, Immortan Joe sends Furiosa off into the desert on a mission. Furiosa has her own agenda, though, and a nearly non-stop two-hour chase begins.

You would think that after nearly 50 years and thousands of centerpiece automobile chases (starting with Steve McQueen’s “Bullitt” in 1968), every original idea in the realm of staging, shooting, editing, and choreography would already be used up. 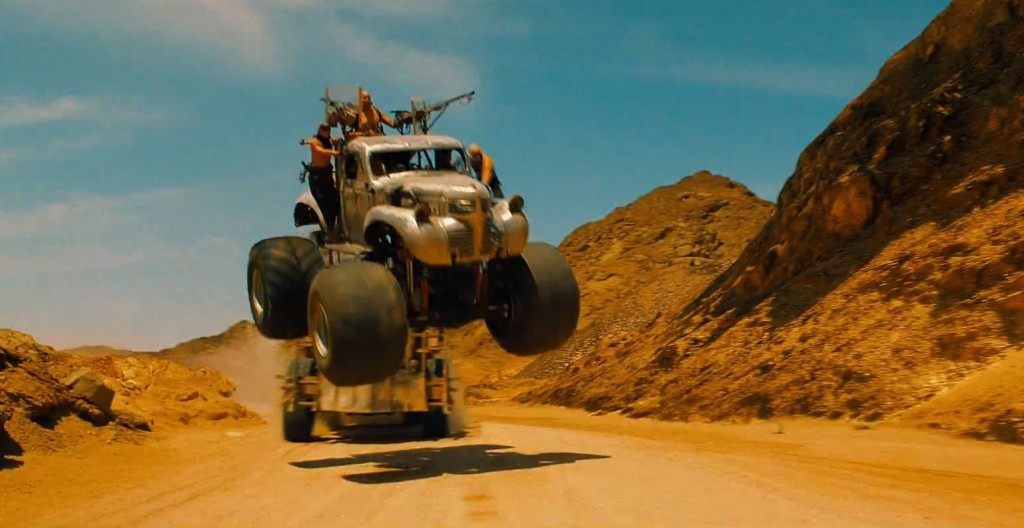 Depending on the box office, “Fury Road” could be every bit the game changer in the sci-fi action genre that “The Matrix” was in 1999 — and a welcome one.

Gone is the lazy shaky-cam. Gone is the lazy kinetic smash-editing. Gone is the lazy choice of sensation over spatial logic. “Fury Road” feels like a BURST from a director who watched in disgust as the genre he pretty much created (See: Warrior, Road) sank into a morass of sound and confusion disguised as pioneering, new wave filmmaking.

After almost twenty years of directing nothing but kids movies, 70 year-old George Miller has picked himself up, dusted himself off, and, like a Boss, once again shown the whippersnappers how it is done.

Granted, because there is a God and He does love us, the era of the evil shaky-cam and blender-editing has been petering out for some time now. And exceptions like “Taken 3” are being handed the box office bombs they deserve. Nevertheless, “Fury Road” is to action what Gene Kelly was to dancing: Impeccable choreography, impeccable timing, vibrant and youthful energy, a joyful sense that anything is possible, and high-art hidden in a working class presentation.

“Fury Road” is dazzling to watch and experience. The talk of no CGI is, however, pure hype. There is plenty of CGI, and that includes moments in some car stunts. Compared to the new “Avengers” movie, which is practically a cartoon for extended periods, this is a small thing and in no way takes away from Miller’s practical-effects achievements. There will be Oscars.

Just as impressive is how much character development and emotion Miller squeezes from a story that is as bare bones as getting from here to there. The script (co-authored by Miller) strips the exposition down to single words. The emotional wallop this approach adds to how we find and how we leave Max cannot be understated. The sparest of moments are used to build characters and relationships from the ground up. The poignancy of the payoffs, many of which surprise, are all hard-earned. 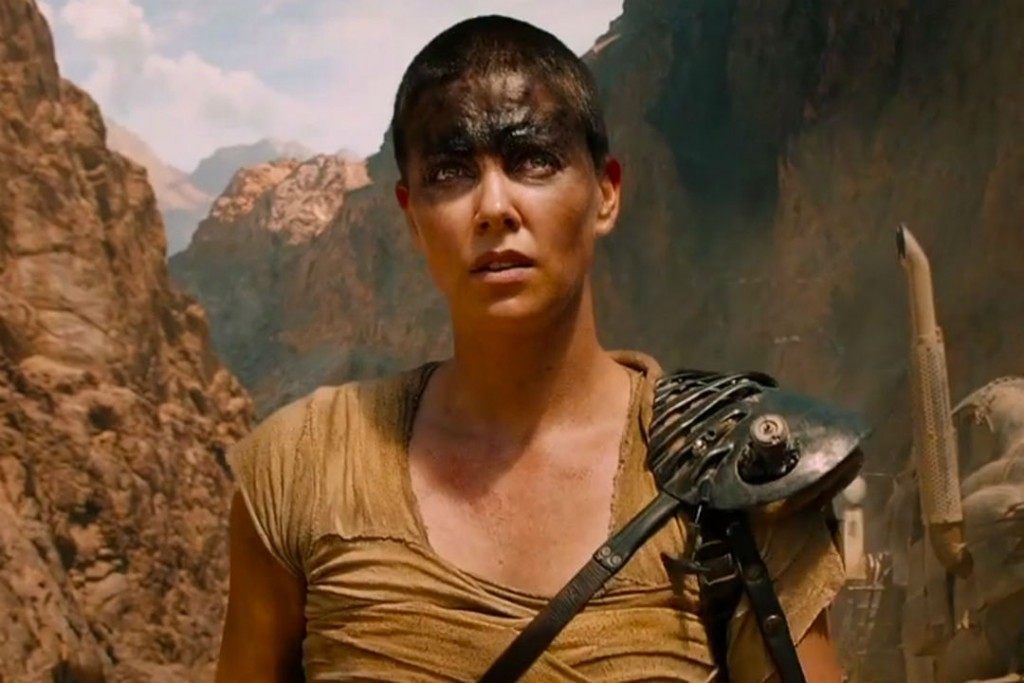 There is some concern that “Fury Road” is a piece of feminist propaganda (Miller is a flaming lefty). In many ways that actually is the case. I also don’t think it’s a bad thing. Oftentimes, and for long periods, “Fury Road” takes the focus off Hardy to hand the spotlight to Theron.  And there is no question that Furiosa drives all but the third act of the story. Keep in mind, though, that there’s feminism and then there’s feminism.

“Fury Road’ is nothing like the diseased modern-day, left-wing feminism spread by the likes of Hillary Clinton and Barack Obama. Miller’s women are not victims, are not Julias, are not dependent on a central government to solve all their problems, are not wallowing in a narcissistic cult of their own victimhood, and are not acting like men.

In fact, just the opposite is true. Miller’s heroines are beautiful, feminine, and breaking away from a cult of personality and its tyrannical central government. These are feminists who have come for their God-given rights, not emasculate. They don’t crybaby, they act. They don’t tell others how to behave, they fight. They don’t want to take away your rights, but they damn sure are demanding their own.

These are women too busy being strong and independent to collapse into a helpless ball of harpy outrage over imagined offenses.

In this Godless world, there’s even a moment of instinctual prayer — and not to the god of partial-birth abortion.

“Fury Road” is something all its own, and neither concerned nor interested nor sentimental about what came before. Touchstones of the past are as spare as the rest of the story — the guts of a music box and the casting of the actor who played Toecutter, the villain in “Mad Max,” as Immortan Joe.

Hardy is a perfect replacement for Mel Gibson, who made Max iconic in Miller’s original trilogy. Both actors are masculine, physical, and convey a livewire quality crucial to the role. Beneath the brooding rage, we sense a humanity worth digging for. And this is primarily what “Fury Road” is about — what it takes to excavate Max.

And what it takes is a masterpiece every bit as fresh and mind-blowing as “The Road Warrior” was nearly 35 years ago.