Amazon Studios has pulled the marketing campaign for its new series, The Man in the High Castle, off of New York City subways after the Nazi imagery in the advertisements prompted complaints from riders.

The Man in the High Castle, the latest original series from the streaming giant, imagines an alternate reality in which Nazi Germany and Imperial Japan defeated the Allies in World War II.

As part of the series’ elaborate marketing campaign, the benches in some New York City subway cars were painted with the show’s alternate American flag, which features the Nazi Reichsadler eagle in place of the traditional stars-and-stripes. Other benches were affixed with Japan’s rising sun flag.

Amazon decided to pull the advertisements from the subway cars after several riders complained, according to Entertainment Weekly.

The ads were almost certain to generate controversy even before they went up. MTA spokesperson Adam Lisberg told Gothamist on Monday that the ads are in line with the public transportation system’s marketing guidelines, which were updated in April.

“The updated standards prohibit political advertisements,” Lisberg told the outlet. “Unless you’re saying that you believe Amazon is advocating for a Nazi takeover of the United States, then it meets the standards. They’re advertising a show.”

However some, like Anti-Defamation League New York regional director Evan Bernstein, believe the imagery was not presented in the proper context.

“On the television program, which explains this is the notion of an America controlled by Hitler, you get that context,” Bernstein said in a statement. “On the train, seeing the American flag paired with a Nazi symbol is viscerally offensive, because there is no context as to what it means. The fact that the flag is spread across the seats only compounds the effect.” 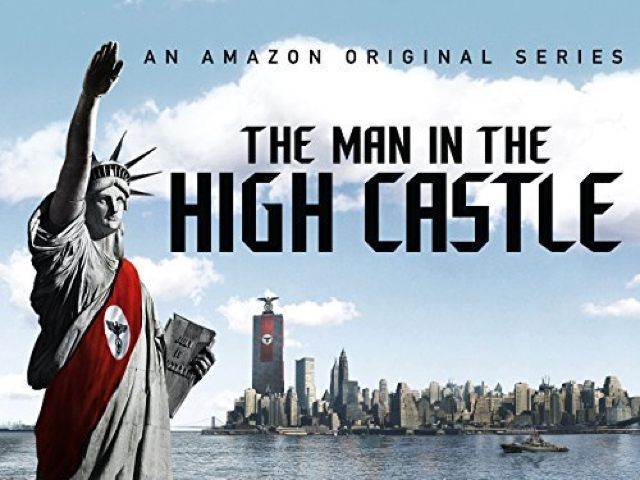 For his part, Man in the High Castle creator and executive producer Frank Spotnitz said he understands the studio’s decision to pull the ads and noted that he wasn’t involved in crafting them.

“It’s very difficult with a show with subject matter like this to market it tastefully, so I understand they’re walking a very difficult line,” Spotnitz told EW. “If they had asked me, I would have strongly advised them not to do it.… I read what the director of the Anti-Defamation League said, and I thought he was 100 percent correct, which is that when you take these symbols out of the context of the show, then they can be offensive and upset people. Within the show, there is a context where you see why [they’re used], but just to put them out like that without the context was unfortunate.”

The entire first season of The Man in the High Castle is available for streaming on Amazon Prime now. Watch the trailer below.