Even though I was disappointed with “Django Unchained,” the idea of another Western directed by a brilliant genre-lover like Quentin Tarantino, is intriguing enough. Add to that the promise of a winter mountain setting in glorious 70MM with a score by Ennio Morricone. Now add Kurt Russell, Samuel L. Jackson, Michael Madsen, and Walton Goggins. Heaven, right? Yeah, not so much.

Why in the name of all that is holy would Tarantino tantalize us with 70MM when 99% of his story is set in small interiors? When we are not in a stagecoach, we are in Minnie’s Haberdashery, a cabin about the size of a Walgreens. Other than some lovely opening shots and a minute or two of flashbacks, “The Hateful Eight” is a stage play, and an overlong one.

The performances are all superb (especially Russell, Jackson, Goggins, and Jennifer Jason Leigh), the dialogue first-rate, and the violence visceral. The characters are nasty, the genre is respected, and the story structure exceptional. Many of the components that make Tarantino one of our greatest directors are there, except the most necessary one: exhilaration. 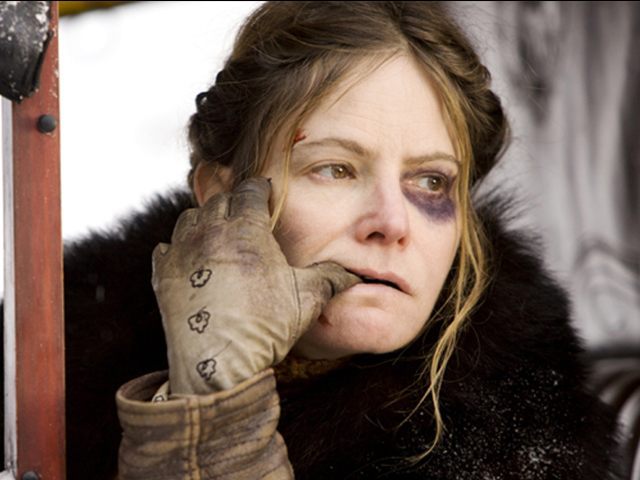 Tarantino is a genre filmmaker, and one who is not terribly interested in using Big Themes or the nobility of his characters to emotionally move his audience. Instead, using violence or suspense or dialogue or creative ideas or a piece of storytelling genius (remember John Travolta returning to “Pulp Fiction” after being shot dead?) he exhilarates us by taking the genres we love to a whole new level.

The cult around Tarantino, of which I am a member in good standing, is a valid one. He loves the movies we love, and instead of using his genius to cater to the Elite, he caters to us and treats films written off by snobs for what they are: art.

“The Hateful Eight” is loaded with good ideas. Kurt Russell plays bounty hunter John Ruth. He’s known as the Hangman, and for the $10,000 reward he is bringing in Daisy Domergue (Leigh), a Calamity Jane type degenerate killer. The stagecoach is headed for civilization, the town of Red Rock, until a nasty blizzard forces an unscheduled two-day stay over at Minnie’s. 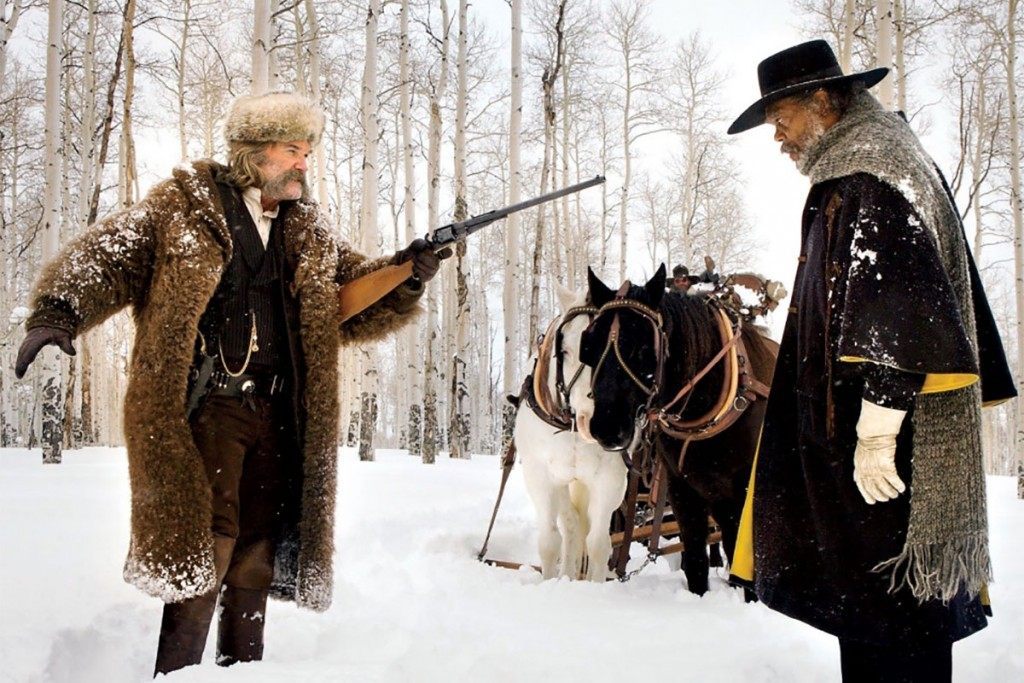 Ruth knows that to any other bounty hunter, Daisy might just as well be a $10,000 gold bar handcuffed to his wrist, which is why he’s immediately suspicious of two stranded passengers they pick up along the way. The first is Marquis Warren (Jackson), a fellow bounty hunter. The second is Chris Mannix (Goggins), a virulent racist who claims he is about to be sworn in as Red Rock’s new sheriff.

Once the stagecoach reaches Minnie’s, Minnie is nowhere to be found and Ruth finds himself confronted by four other men who might not be who they seem. Eight disparate Tarantino characters forced into tight quarters while a blizzard rages outside…? Maybe not for 70MM, but that’s a pretty good idea. For everything that does work, much doesn’t. 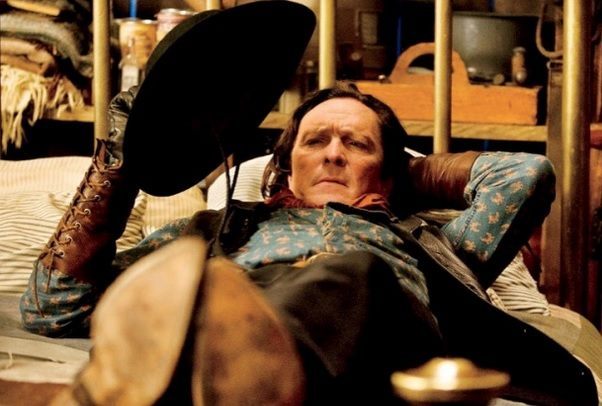 The film’s primary problem is that it is not terribly suspenseful, but it is three hours long! I can’t put my finger on why, maybe it’s due to all the characters (other than Russell) being so unlikable, but the screws never tighten. The suspense never ratchets. Tarantino fails to elicit suspense from a sequence involving poison. There isn’t even a good gunfight.

Also disappointing is Morricone’s score and Tarantino’s overall use of music, which is generally where the Oscar-winner lifts you right out of your seat. At the end of the day, the director is responsible for the success of a film score. He tells the composer what he is looking for and guides the process until he gets what he wants, and what Tarantino apparently wanted was serviceable, nothing iconic or memorable.

There are a couple of great scenes in the overly-talky “Hateful Eight,” nice use of a “Lincoln letter,” and plenty of opportunities to admire Tarantino’s remarkable craftsmanship. But that’s only because the story fails to transport you.

This post has been updated to correct a factual error.