“Famous” is featured on West’s latest studio album, The Life of Pablo. The music video shows 12 naked celebrity look-a-likes lying in bed together as the vocals from singer Rihanna, also featured in the video, and Swizz Beatz and West rang out.

Along with those celebs, the likes of Chris Brown, Anna Wintour, Kim Kardashian, Amber Rose, and Ray J. make an appearance in the Grammy award-winning rapper’s new not-safe-for-work video.

“It’s not in support or anti any of (the stars in the video). It’s a comment on fame,” Kanye West told Vanity Fair.

Although it is unclear which, if any, of the celebrities pictured in the “Famous” music video were actually in the bed, West said the famous friends he showed the video all said they wanted to be a part of the process.

“Guess what the response is when I show it to them?” West said. “They want to be in the bed.” 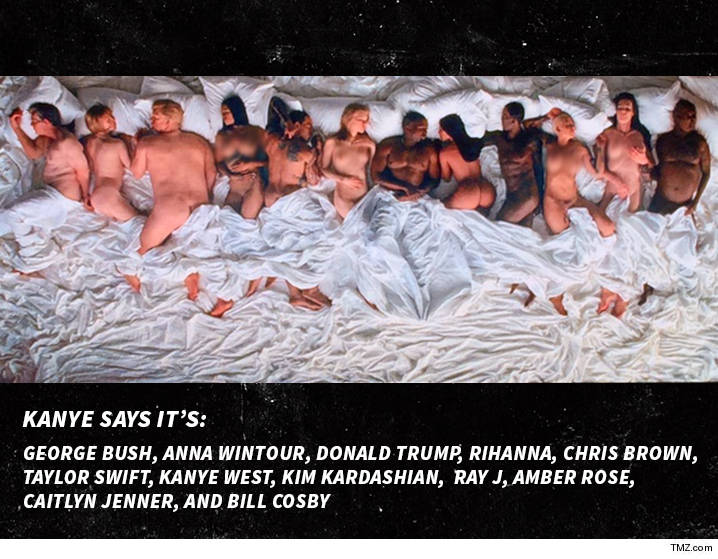 Social media reaction to the “Famous” visuals came quickly. Most of the response reflected shock and awe from fans and viewers alike.

Some insinuated a Taylor Swift-led lawsuit as a likely outcome:

Rare pic of taylor swift emailing her lawyer to give kanye a ceast and desist after the famous video #TIDALXFAMOUS pic.twitter.com/mA2jp9kv2d

Others chalk West’s latest addition up to a declined mental state:

Still, others were floored:

One social media user even wondered what presumptive presidential candidate Donald Trump thought about his likeness being featured in West’s new music video.

West released The Life of Pablo last February. Watch the full visual for “Famous” on Tidal.