On Monday’s episode of Bee’s Full Frontal, she sat down with Beck, and the two supposedly diametrically opposed TV stars discussed how they plan to unite to fight “Trumpism.”

Sporting ugly Christmas sweaters, Beck and Bee began their “healing” process by sharing what each of their respective audiences believes about the other’s.

“My audience would like to stab you relentlessly in the eye,” Beck joked.

“My audience wants to kill me for normalizing a lunatic like yourself,” Bee responded.

Bee nonetheless said that “much of Glenn’s message has changed” and said TheBlaze founder, to her apparent chagrin, “seems to be a deeply sincere and decent person.” Bee commended Beck for taking heat from conservatives when he came out publicly against Trump, and again when he provided toys and food to the children of illegal immigrants at the U.S.-Mexico border.

Bee offered an explanation for Beck’s appearance on her show.

“I think that our future is going to require a broad coalition of nonpartisan decency. It’s not just individual people against Donald Trump; it’s all of us against Trumpism,” she said.

“I agree,” Beck replied. “As a guy who has done damage, I don’t want to do any more damage. I know what I did. I helped divide. I’m willing to take that. My message to you is: Please don’t make the mistakes I made. And I think all of us are doing it. We’re doing it on Facebook, we’re doing it on Twitter. We tear each other apart and we don’t see the human on the other side.” 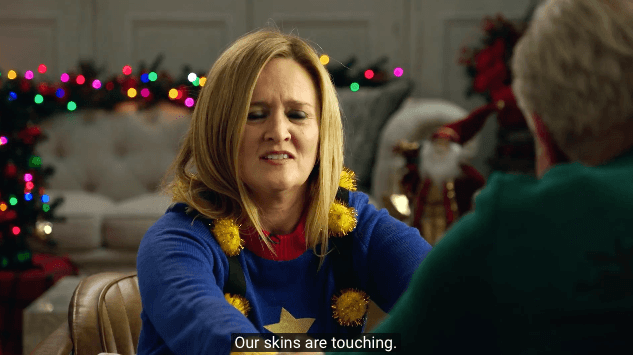 Beck joked with Bee that he is a “catastrophist” and informed her that she has become one too, rattling off a series of doomsday events that they both agree could come to pass during a Trump presidency.

Bee’s realization that she and Beck were “becoming allies,” threw the comedienne into a “Christmas crisis.”

Beck also said Bee is just like he was, and said he believes that she cares about bringing positive change.

Later, Beck and Bee literally reached out to each other and began holding hands.

“Our skins are touching,” Bee cringed.

The bizarre bit ends with Bee gifting Beck a “Strange Bedfellows” cake of the pair lying together in a bed. The two then take turns eating each other’s cake head.

TheBlaze founder’s appearance on the TBS late night show came about a week after Bee joined Beck’s news program for an hour-long discussion about how much they both fear Trump.

For Beck, however, Monday night’s was the latest stop on his months-long “apology tour.”

The conservative pundit has been busy rebranding his image. In September, Beck penned a heartfelt message of support and “empathy” for Black Lives Matter in a New York Times op-ed. As Breitbart reported, “[i]n early November, a New Yorker profile of Beck explained that he had “rethought some things” after listening to a recent speech by Michelle Obama that he praised as “the most effective political speech I have heard since Ronald Reagan.” The article described Beck as a “Black Lives Matter supporter” and quoted him praising the president he once harshly criticized, declaring that Barack Obama made him “a better man.”

As Breitbart previously reported, “[d]uring the campaign, [Beck] regularly described Donald Trump as a Hitler-like psychopath with supporters he compared to Nazi Brownshirts. The former radio shock jock’s disdain for Trump reached a crescendo in April, when he donned swim goggles and rubbed his face in a bowl of crushed Cheetos to see if he could ‘look like Donald Trump.'”

Watch the video of the full segment above.