Street artist Sabo has skewered Caitlyn Jenner with a series of mock posters depicting the reality TV star as the demon clown Pennywise from Stephen King’s horror classic It.

The posters were hung up outside the Fox studio in West Los Angeles over the weekend, according to the Hollywood Reporter. The artwork features the face of the Keeping Up with the Kardashians and I Am Cait star imposed onto the body of the scary clown character, who will be seen in the upcoming remake of the original 1990 TV movie headed to theaters this fall. 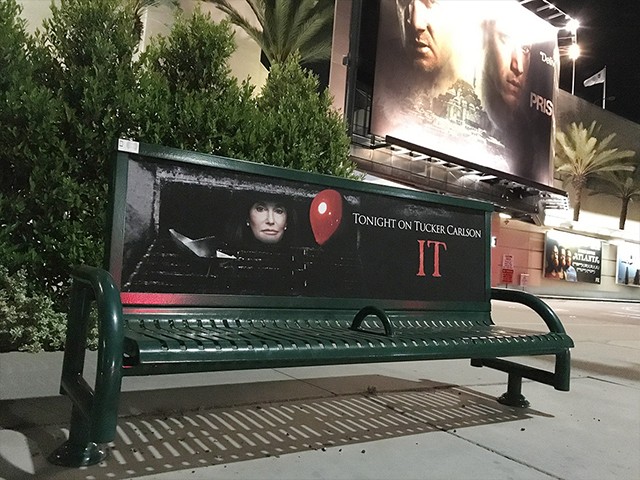 Jenner was in the headlines again this week after sitting down with Diane Sawyer for another 20/20 interview about living life as a transgender woman that aired Friday, nearly two years to the day after the former Olympic gold medalist, formerly known as Bruce Jenner, first came out as transgender in a blockbuster 2015 interview.

In the interview, Jenner confirmed a successful gender reassignment surgery earlier this year, and issued a warning to President Donald Trump and Republican legislators on LGBT rights.

Sabo has been busy since November’s presidential election. The street artist and provocateur has taken aim at Hollywood, with a series of fake realtor posters skewering celebrities who vowed to leave the country if Donald Trump were elected, and a series of posters mocking the film industry’s “unwatchable movies.”

Earlier this month, Sabo poked fun at North Korean leader Kim Jong-un with a series of fake advertisements for a line of barbecue called “Trump’s North Korean BBQ,” which featured the head of the dictator imposed onto the body of a roasted pig.

The remake of It hits theaters September 8, with Bill Skarsgard set to play the clown Pennywise.