The music video for electronic music-maker Moby’s latest song depicts President Donald Trump as a Nazi robot who is eventually blown up by a band of rebellious citizens.

The three-minute video for Moby’s song “In This Cold Place” sees an evil capitalist Trump, who transforms into a flying swastika money symbol, in a battle to take over a slowly decaying world. Visuals in the trippy video include a border wall, President Richard Nixon with a Pinocchio-style nose that grows and wraps around the world, and several popular cartoon characters, including He-Man, the Care Bears, Mickey Mouse, and Mario.

“As time has passed, I’ve wanted more and more for my work to somehow reflect my political concerns and my world views and issues that are important to me,” Moby told HuffPost about working on his latest project. “I’ve realized that music videos are just a really good way of trying to do that.”

The “dystopian and extreme” illustrations were created by English animator Steve Cutts, who Moby demanded push his creative limits.

By the end of the music video, Trump is blown up in an uprising and all antagonists are destroyed. One scene sees the cartoon protagonists banishing an evil Rupert Murdoch, Theresa May, Kim Jong Un, and a bat-shaped Steve Bannon.

The 51-year-old singer says he’s not concerned about depicting violence against President Trump landing him in legal trouble, like it did Kathy Griffin, so much as he is worried about his new music video being banned from social media sites.

“The criteria that you would use to determine where you draw the line is simply what’s effective and what’s legal,” said Moby. “And I don’t mean legal in a cowardly way. I mean legal in a way that would lead something to be taken off the internet. Because you can make the best content in the world but if YouTube and Facebook won’t let people see it, then what’s the point of having this great content.”

“In This Cold Place” will appear on Moby’s new album, More Fast Songs About the Apocalypse, which was announced last week. Moby took to Twitter Monday to announce the release of his music video, which he described as a “masterpiece.” 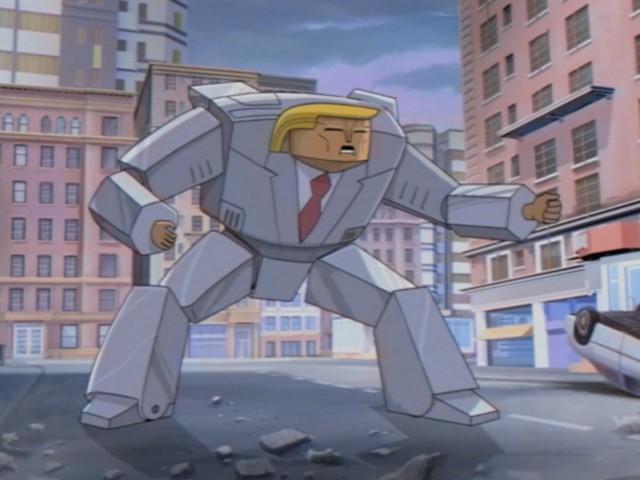 The dance music icon has long been a vocal opponent of President Trump.

Days after the election, Moby wrote an open letter to the American people asking “what the f*ck is wrong” with them.

In February, the 51-year-old DJ claimed to be in possession of intelligence that proves that “the Trump administration is in collusion with the Russian government.”