Chuck Lorre, creator of Big Bang Theory, once again took a swipe at President Donald Trump, claiming that he may have syphilis or suffered brain damage during birth.

“I was recently thinking about obstetrical forceps, a tool used to grab the head of an unborn baby and yank it through the birth canal. While injuries to the baby are rare, if the doctor were to sneeze during the procedure, it could cause serious brain damage to the unborn child,” Chuck Lorre wrote in a title card in the end credits, as first reported by MRC’s Newsbusters. 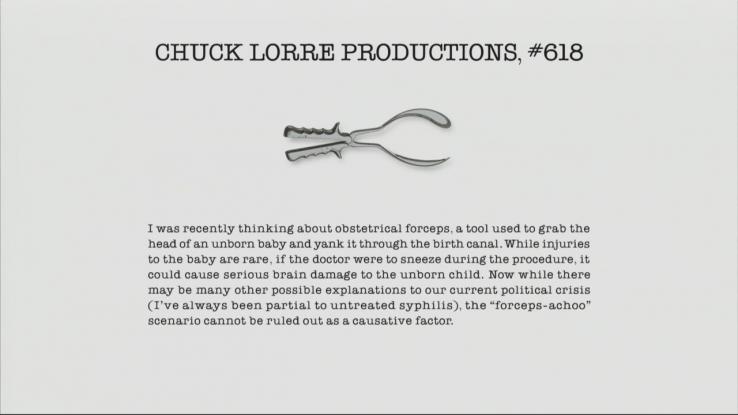 Vanity card from CBS comedy The Big Bang Theory’s May 2 episode, “The Plagiarism Schism” via MRC

“Now while there may be many other possible explanations to our current political crisis (I’ve always been partial to untreated syphilis), the ‘forceps-achoo’ scenario cannot be ruled out as a causative factor.”

Lorre has repeatedly used “vanity cards” to attack President Trump and his supporters.

Lorre also fantasized about “a little Old Testament wrath” being used against him.

The CBS show creator attacked White House press secretary Sarah Sanders over her appearance and her Christian faith in February, saying, “God told me he hasn’t spoken to Sarah Sanders since she was fourteen years old and praying for her skin to clear up. I have no reason to doubt Him.”