Yahoo News cobbled together a handful of social media users who attacked actor Chris Pratt this week, accusing him of wearing a “white supremacist” dogwhistle after Vulture staff writer Hunter Harris tweeted a photo of the patriotic A-lister wearing an American flag T-shirt with “Don’t Tread On Me” and the Gadsden flag coiled rattlesnake superimposed on it.

Pratt was recently photographed by a paparazzi wearing the dark blue T-Shirt featuring an American flag with a coiled snake superimposed over it, and a slogan reading “Don’t Tread On Me,” underneath. The shirt is essentially the same design as the Gadsden Flag, named after American general and politician Christopher Gadsden, and which came to prominence during the Revolutionary War. It is the flag adopted by the Continental Marines in 1775 during our Revolution against Britain. Gadsden designed it, and the flag has been used steadily by any manner of groups since it was first created.

Yahoo News did the heavy lifting here, appearing to legitimize the smear from a few unverified social media users that the flag is bigoted, saying “over the years the flag has been adopted by Far Right political groups like the Tea Party, as well as gun-toting supporters of the Second Amendment.”

It didn’t take long for some social media users to attack Pratt for wearing the design.

I like him, but all these small things about his politics makes me wonder when he’ll say something transphobic, tank his career, and do the full heel-turn into a Fox commentator https://t.co/Emfzd02GmK

ellen page called him out and some of y'all didn't listen now look at this shit https://t.co/hX01z3ifF8

Unfollowed already. Haven't liked him since Parks & Rec anyhow, and I can easily cancel him in that too. @prattprattpratt hope those bigots pay you a good pay check. Bye girl. https://t.co/2yuS7IZmtu

Yahoo News also changed the headline on its original story, after this article was published, and edited out the “white supremacist” phrase one social media user said. 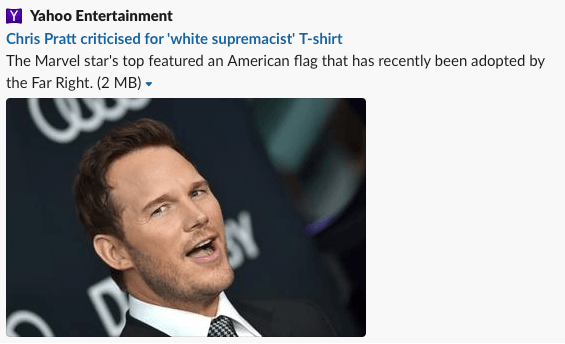 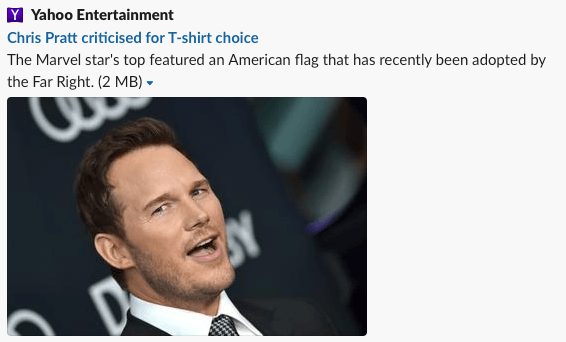 In recent years, the Gadsden Flag and similar designs have become popular at Tea Party events, used by the rock band Metallica, and in 2006 it was adopted by Nike to promote the U.S. Men’s Soccer Team. These entities are obviously in no way associated with white supremacy nor is the Gadsden Flag.

Historian and author Marc Leepson was quoted by the New Yorker as saying that the origins of the Gadsden Flag “were completely, one hundred percent anti-British, and pro-revolution.” The outlet also quoted the Equal Employment Opportunity CommissionI as saying that “the Gadsden Flag originated in the Revolutionary War in a non-racial context.”

As for Chris Pratt — who stars in blockbuster franchise films, including Universal’s Jurassic World and Disney’s Guardians of the Galaxy, and recently received a star on the Hollywood Walk of Fame — it’s pretty safe to assume that he no doubt wore the short as a show of patriotism.

The Minnesota-born star has long supported the military and police and is open about his deeply held faith in God.

In June 2018, Pratt shared his “Nine rules from Chris Pratt” at the MTV Movie and TV Awards. The actor told the millennial audience and those watching at home that “God is real,” He loves you, learn to pray, you have a soul, and you should take care of it.

1 of 9 rules from @prattprattpratt "Don't be a 💩" Congrats on receiving the Generation Award! #MTVAwards pic.twitter.com/IFn87o8Kuk

A devout support of the military, Pratt helped promote the Murph Challenge — created to honor U.S. Navy SEAL LT. Michael Murphy, who was killed in combat and posthumously received the Medal of Honor for his bravery.

#TheMurphChallenge is just around the corner. Me and the gang got one done yesterday. Go to themurphchallenge.com to find out what I’m talking about, get you a shirt-post a sweaty pic with your crew for a RT! Order today for guaranteed shirt delivery on time for #memorialday amd join the millions of bad asses who’ve accepted the challenge! All proceeds go to a great cause! Special thanks to @jayglazer @xcnatch @iheartmindy @kimdejesus @tyga @shawnemerriman @nateboyer37 @brock_hekking @grahambunn @robg @reallifepimp @oliverstarkk @arnoldchon @jlweddle @adelkyokushin @forgedmike @samantha_r_bonilla #jaredshaw and everyone else who made it to @unbreakableperformance to take the challenge yesterday. We’ll be doing it again on memorial day. Join us!!! Get your shirt! Participate! Also shout out to my buddies @ericchurchmusic for the use of outsiders and @patrikgiardino for shooting the video. We’ll be dropping the full video on Memorial Day. And lastly but most importantly thank you to Lt. Michael P Murphy and the millions of soldiers who have paid the ultimate sacrifice for our freedom. We live this life because you laid down yours, gratitude and prayers for all of you. ♥️👍🏼🙏🇺🇸

A few years ago, Pratt posted a short video of he and his son, Jack, reciting the Pledge of Allegiance on Memorial Day.

This article has been updated to show that Yahoo News changed its original headline.