Saturday Night Live has spent decades airing sketches mocking Asian stereotypes, with Caucasian cast members performing in yellow face and cracking jokes like “probrem” and “what if she no like chicken?”

The politically incorrect sketches — including the recurring “Ching Chang” sketches from the 80s and “Tech Talk: iPhone 5” from 2012 — have been gaining attention following SNL‘s decision on Monday to fire comedian Shane Gillis for using slurs against Chinese people and gays in an old video. 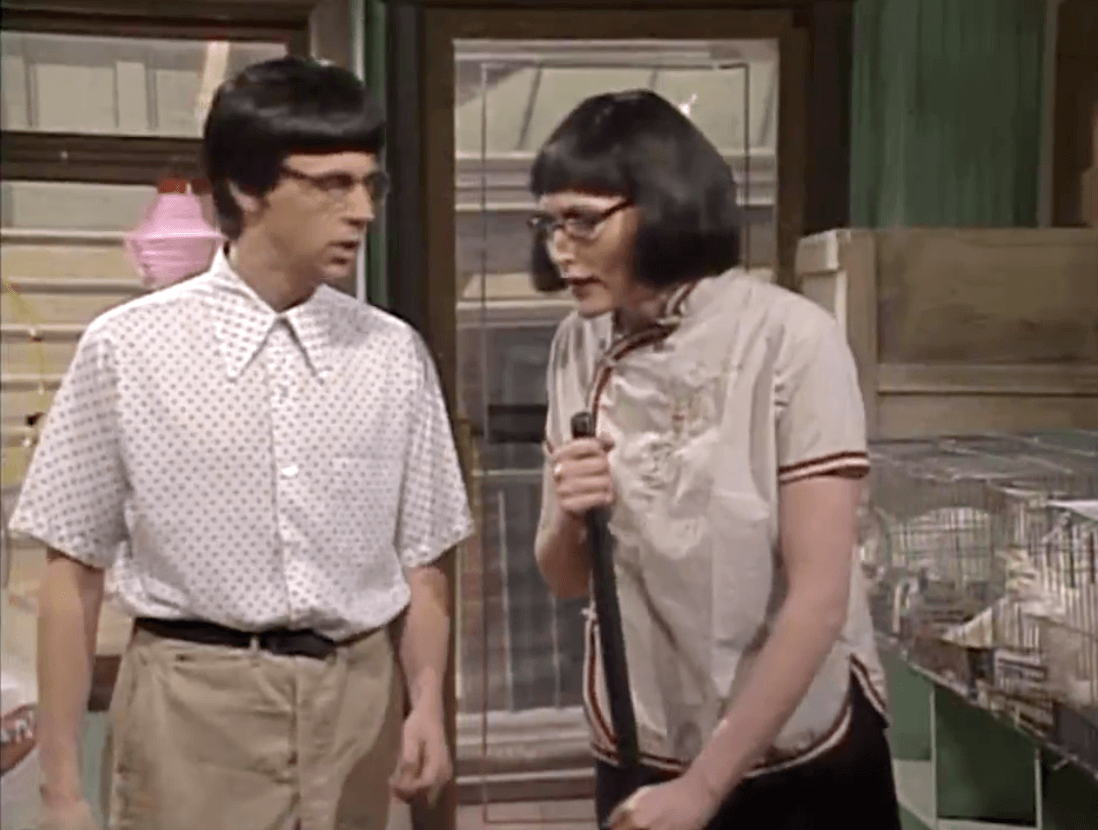 Gillis had just been announced as a new cast member four days earlier and apologized for his past jokes. An SNL spokesperson said in a statement that “the language he used is offensive, hurtful and unacceptable.”

But the statement seems to contradict the show’s own  programming history, which includes sketches featuring white actors in Asian roles in which they affect crude Chinese accents.

“Ching Chang in Love,” which aired in 1985,  was part of a recurring series of sketches starring Dana Carvey as a Chinese shopkeeper who keeps a pet chicken in a cage, and Nora Dunn as his exasperated co-worker.

But let me know when we're going to discuss that Dana Carvey had a recurring character named "Ching Chang." pic.twitter.com/8WJaMUR5Ih

“No, I tell you chicken make lousy house pet,” Carvey’s character explains to a customer who wants to buy his chicken.

When he gets into an argument with Dunn, the actors start railing at each other in fake Chinese. Later in the segment, he falls in love with another customer, played by Valerie Bertinelli.

“What if she no like chicken?” Carvey ponders. He concludes the sketch with a heavily accented rendition of “Get Me to the Church on Time” from My Fair Lady.

The cast members speak in faux-Chinese accents as they compare their meager existences to first-world problems faced by Apple’s core consumers in the U.S.

At one point, Pedrad’s character sarcastically tells an American consumer, “Thank you for pointing out probrem.”

This is an SNL clip from 2014 and it’s funny as hell. Always been one of my favorites of the decade. They’re playing Chinese sweatshop laborers. Nasim Pedrad straight up says “Probrem”. Is this different from Shane Gillis? pic.twitter.com/2Zbjy0iMdn

Gillis responded to his firing on Monday, writing on Twitter that “it feels ridiculous for comedians to be making serious public statements but here we are.”

He said he respects the show’s decision and added that he is more of a “MADtv guy anyway.”