A few years back I published the 165 Greatest American Movies Ever Made. In preparation for this new list, which will look at the 53 greatest movies released between the years 2000 and 2019, I took a look at that old list and was pretty satisfied with it, which is rare. Usually rereading my old stuff is something close to excruciating. “Looking back” isn’t my thing. Photo albums, home movies, remember when conversations. Passing the time being reminded of how much time has passed…?  Depressing. No thanks. I don’t like change. You can keep the change.

Movies don’t change. Movies never change. They’re worlds frozen forever on celluloid, and no matter how many times you go back, Cary Grant is still young, John Wayne is still tough, Robert Mitchum is still cool, Rita Hayworth is still perfect, and Bogart always does the right thing with Bergman.

When it comes to SEO, the SEO gods demand odd numbers. Who am I to defy the gods?

Like my 165 list, this is just one guy’s opinion — a guy who digs movies, who enjoys writing about them, sharing them. No part of me believes this list is definitive and my criteria is the criteria of a simpleton: The stuff I rewatch the most.

That’s all this is.

It’s not about mise-en-scène (which I’ve never really grasped), or cinematography or performance or what the auteur has to say about the foo foo-this or the foo foo-that. Sure, I could do that — you know, fake it, show off. But, man, faking it is work.

This time I didn’t exclude foreign titles. My latent globalism will not be denied.

Last thing: My initial picks for this list were a bit teen heavy. What I mean is, I chose a lot of movies between 2014 and 2019. Were movies during these last five years that much better than the first 14? I doubt it. They’re just fresher, and feel fresher, newer … because they are. So I did some actual work, which was still less work than faking it: I went back 20 years for another look at the movies I was in love with then. That was nothing close to work.

This list will roll out daily over six chapters.

More tears are shed over answered prayers than unanswered ones.

The late Philip Seymour Hoffman finally won his Best Actor Oscar for inhabiting a role that could have easily turned to parody (and did the following year in Infamous). Instead, director Bennett Miller, along with screenwriter Dan Futterman, crafted the best kind of movie — one that says so much about so much; about the dignity of small towns, about the provincialism of Manhattan, about the butterfly effect of grisly murders on the American psyche and culture, about the monstrous behavior that is sometimes required to create timeless art… And sometimes isn’t. To Kill a Mockingbird, for example. 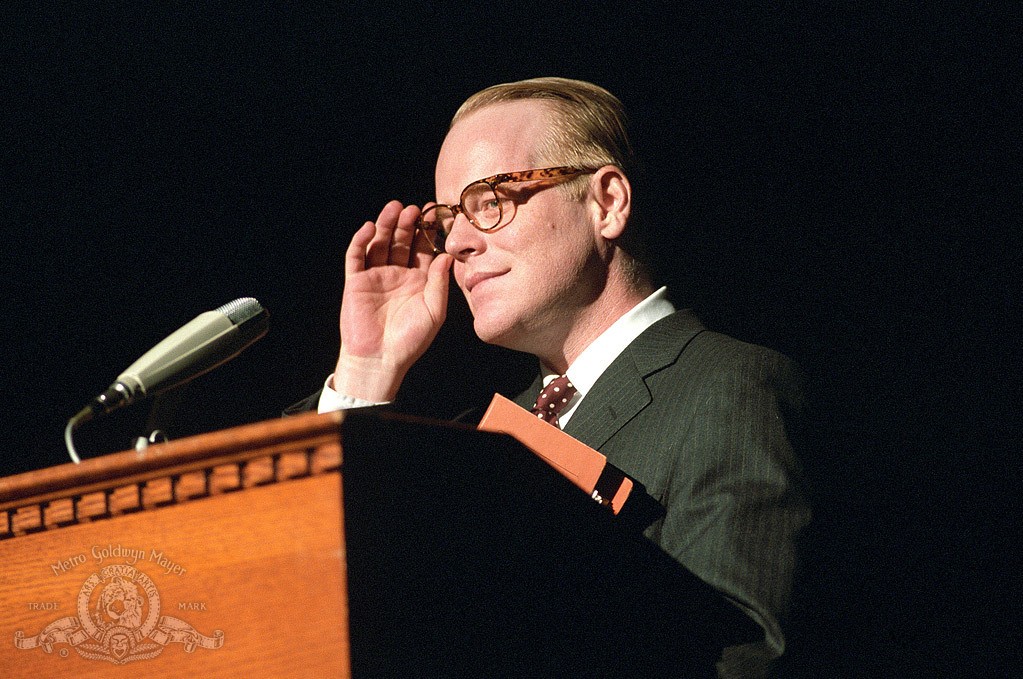 The human cost of Capote’s masterpiece, In Cold Blood, went well beyond the Clutter family, and Capote reveals that truth in a mesmerizing, beautifully photographed 114 minutes anchored by a for-the-ages central performance.

I tried. I think you would all agree that I tried. To be true, to be strong, to be kind, to love, to be right. But I wasn’t. And I know you knew this. In each of your ways. And I am sorry.

The Mighty Robert Redford, the movie star, who better than anyone defined the ideal of rugged American individualism in the 1970s, returned at age 76 to prove he still has no equal.

This is a one character movie. You never, not even in flashback, see another face. This character does not even have a name. He is simply Our Man.

Our Man wakes to discover a freak accident punched a hole in the side of his 39-foot yacht. He’s alone in the middle of the Indian Ocean and sinking fast. He patches it. But the intrusion of all that saltwater causes other problems. And then the storm comes. Our Man overcomes that and then this and then that and then the other thing, until his only option left is to…

A fantastic script that keeps the plot turning, and manages to give Our Man a rich and complicated emotional life with almost no dialogue, much less exposition.

It’s not just a great screenplay (by Aaron Sorkin)  and a number of stellar performances, it’s director David Fincher’s style — the way in which the tells the story, the ambiance he creates, the hypnotic trip he takes you on…. 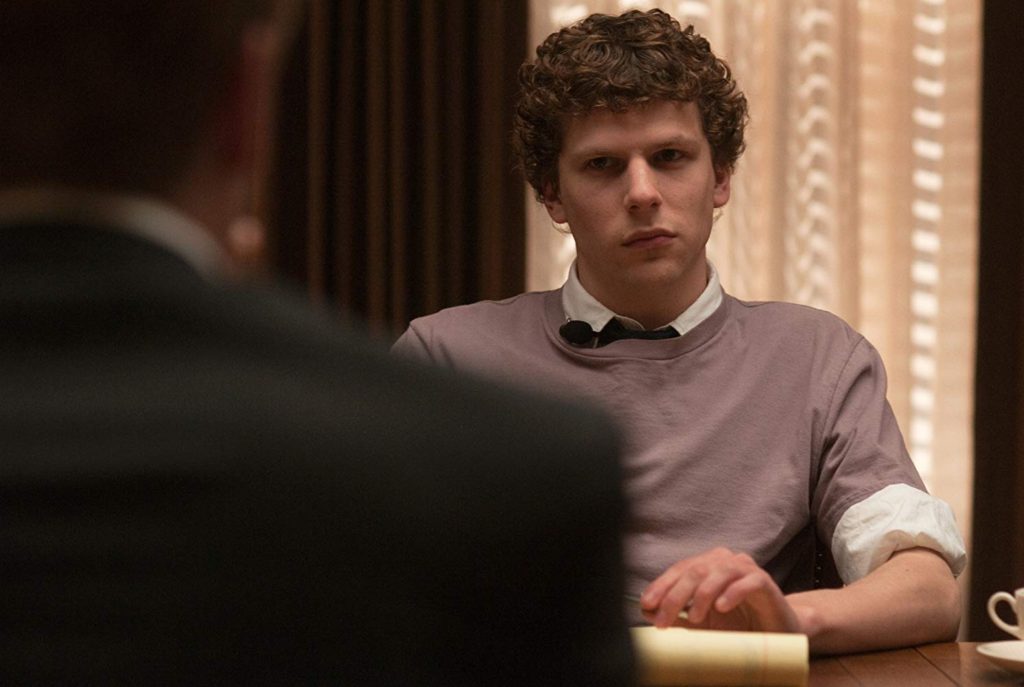 I didn’t much care for Social Network when it first came out. As impressed as I was with the film-making, I found it a bit cold. But like all great movies, it kept calling me back for another chance, and after a few chances, I discovered it wasn’t cold at all.

You see, it all comes down to a girl; even at the end, even when Zuckerberg has all those billions, even when he is already so untouchable the outcome of this lawsuit doesn’t really matter, even when he has everything he wants, he still doesn’t. There’s something poignant about that.

Every scene is a marvel, a thing all its own.

We live in an era of fraud in America. Not just in banking, but in government, education, religion, food, even baseball…

One of my favorite movie genres is the one that takes you inside of something to show you how that something works. The Big Short, the 2010s version of Wall Street (1986), does exactly that, and like that marvel of an Oliver Stone film, you don’t always understand what exactly is happening. But like those confusing orange juice futures at end of Trading Places (1983), by that point you don’t care. You know enough. 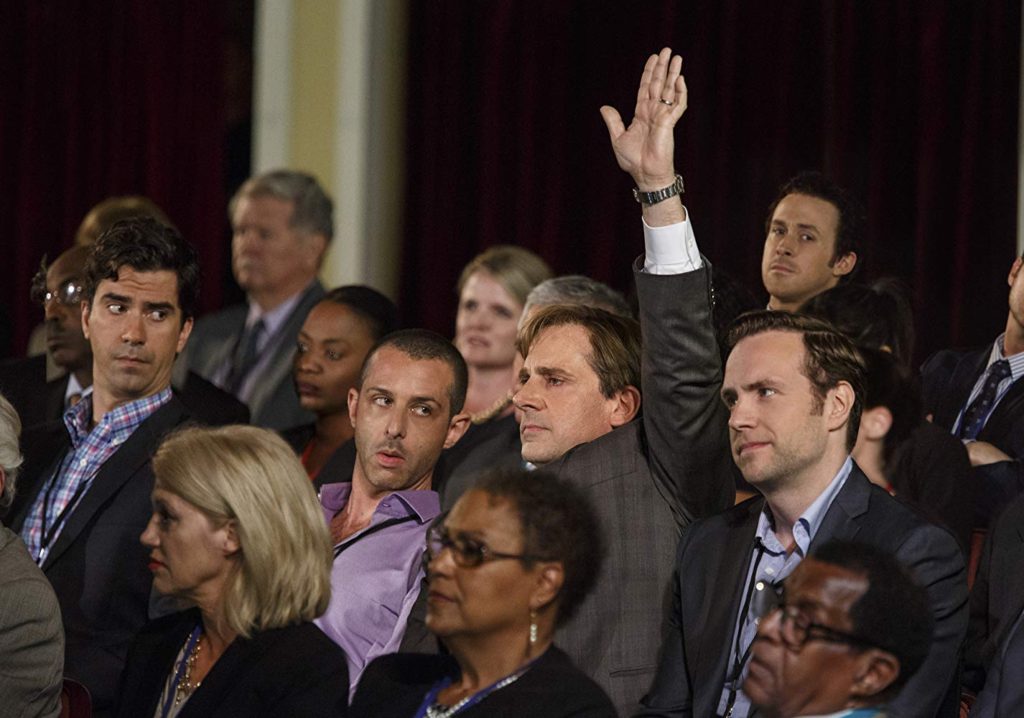 Director Adam McKay, who won a well-deserved Oscar for his screenplay (along with co-writer Charles Randolph), pulls off a perfect tone. Somehow, one of the smuggest directors working today (see: Vice, Talladega Nights) managed to take on the 2008 Wall Street crash and straddle that fine line between the righteous and self-righteous, between smart and smug.

I know we’re not supposed to say that, but Hitler was a human being and it is only through that lens that we come to understand how he was able to mesmerize a country, lead that country to suicide, and grasp just how truly evil he was. 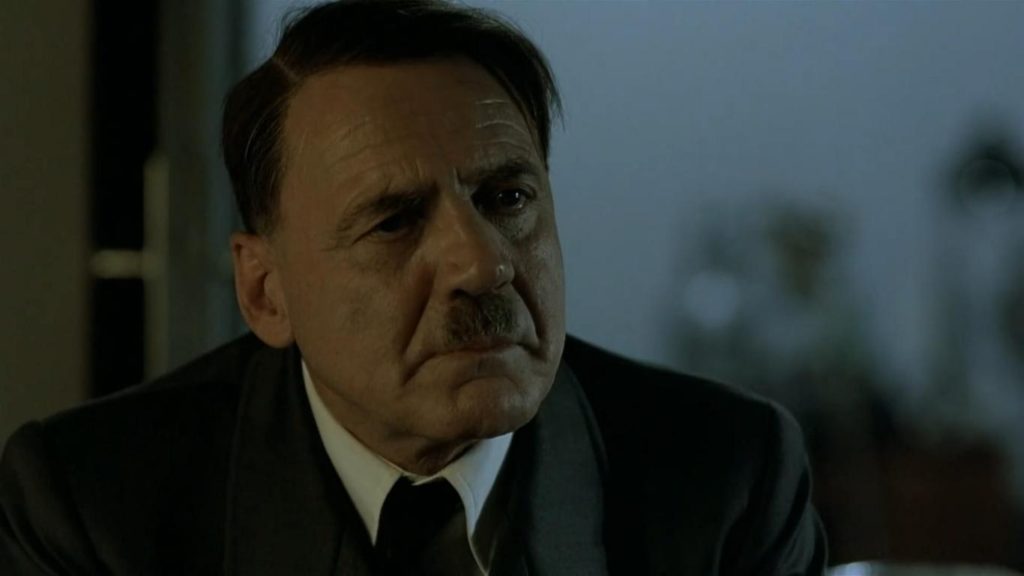 Prior to this masterwork, the spittering, sputtering, maniacal, frenzied, oh-so dull and one-dimensional Hitler characterizations were no more unsettling than a Bond villain. Who fears a cartoon character? Downfall will have none of that. Thanks to a brilliant screenplay and the late Bruno Ganz’s stunning portrayal of Hitler, the true horror is finally revealed.

Downfall is not just an unforgettable experience, it teaches you something — not just about Hitler’s final days, but about human nature and evil.

I can no more relate to Matthew McConaughey’s promiscuous drug addict Ron Woodroof any more than I can relate to Jared Leto’s drug-addled transsexual Rayon (both won no-brainer Oscars). The sleazy lives these two men lead, their mores, their serially stupid and self-destructive behavior… They might as well be from Mars.

And that’s the secret of this incredible true story.

There’s no bathos, no demand for sympathy, no manipulation of our emotions. Director Jean-Marc Vallée has enough faith in his audience, in our shared humanity and decency, not to talk down to us. Again and again, he demonstrates this faith, his belief we share enough in common as Americans, as a species, to relate to anyone, even these two when it comes to our basic right to survive.

The enemy here is not America, or Red State America, or bigotry or homophobia. Sure, that stuff exists, but what’s really killing people is that already in 1985 we gave the federal government way too much power over our healthcare.

Dallas Buyers Club is an old-fashioned, American can-do movie, a story of everyday heroism, of those who will not be denied the basic human right to live and to stay alive in a manner of their own choosing.

Another brave story about the horrors that will always be found in bureaucratic, dead-eyed, state-run healthcare, this one set in Canada.

An old libertine socialist is dying and it takes his estranged, money-grubbing, capitalist son to make his final days comfortable. 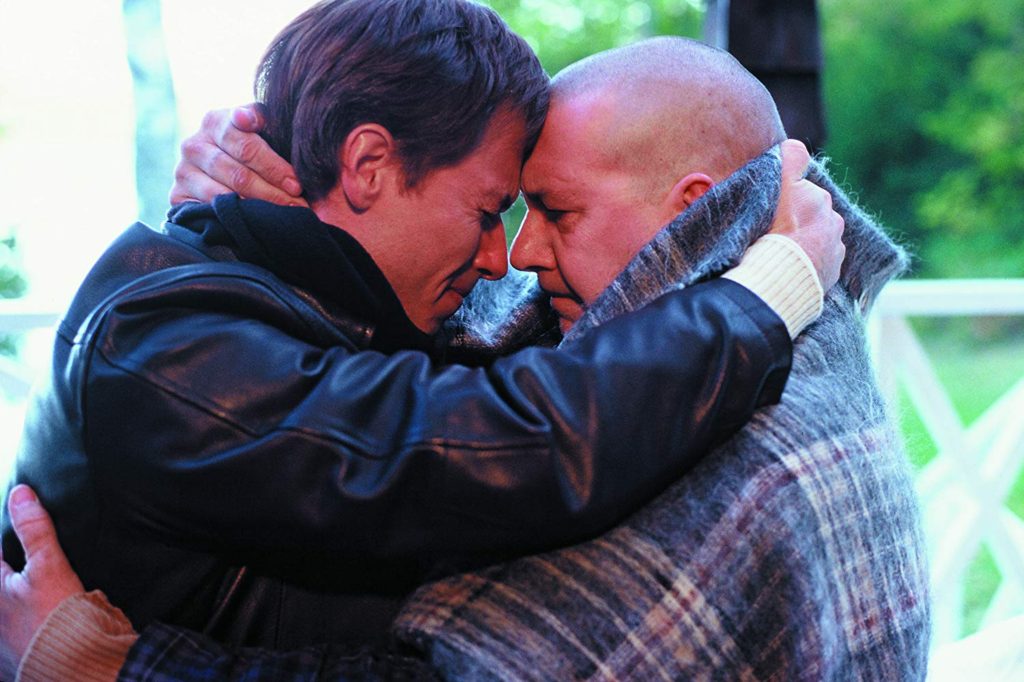 Director Denys Arcand’s sequel to 1986’s The Decline of the American Empire, offers a realistic look at the ultimate cost of the sexual revolution, the narcissism behind big government utopianism, and the flip-side of that — the selling of one’s soul to corporate America.

And it’s all wrapped in a lovely and moving  romantic comedy.

Are you sure you’re Mexican? You’re acting like you’re under The Fuhrer or something.

The idea of a 90-year-old man running drugs for a Mexican cartel is just the hook for director-star Clint Eastwood to hang on to.

The real story is a poignant one about a man who wakes up one day and realizes he wasted the gift of a long life on the fairy dust of status and skirt chasing.

The beauty of the story, though, is that the man doesn’t change. At 90, he is who he is. But… nearly a century in, that man can become a better man, a man who makes amends, and who, in the end, accepts responsibility.

Sicario, Wind River, Yellowstone… Screenwriter Taylor Sheridan is the right talent to come along at precisely the right time.

The Texas-born Sheridan gets us, and by “us,” I mean a vast part of the country that prefers the quiet life down on the farm to gay Paree.

Sheridan’s Hell or High Water captures more than West Texas. This is a story that understands West Texas, understands men who don’t want to learn computer coding, who define themselves as men through a way of life, family, a spread of land, and the opportunity to build something more than a website.

Exciting, perfectly plotted, and not a southern, good ole’ boy stereotype in sight.

We’re not asked to accept the behavior of these two bank robbers. But when it’s over, we do understand them and that’s enough.

My dad was a cool guy, you know?

From an earlier review (with minor tweaks): A fascinating and altogether heartbreaking documentary about the implosion of an everyday  family — every moment of which is captured on their own home movies. 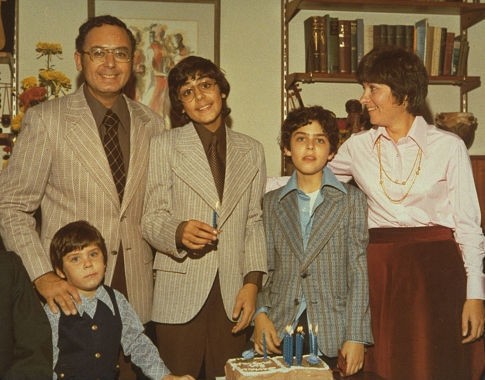 Director Andrew Jarecki at first wants us to believe he is telling the straight-forward story of two monsters — a father and son — discovered hiding out in the American suburbs. Yet, by the time it’s over, you don’t know what to think anymore — other than the American media are garbage and our criminal justice system is only as good or frail as human memory.