Westworld star Evan Rachel Wood has announced that she is leaving Twitter, a decision that comes after she defended fellow actress Rose McGowan for standing up for Joe Biden-accuser Tara Reade.

In a tweet this weekend, Wood said that she knows what it feels like to “speak out, get attacked, and have no one stand up for you.”

Evan Rachel Wood said that she will be “deactivating” her Twitter account until further notice. “This used to be a place where you could control your own narrative,” the actress tweeted. “Now it has become something else entirely. I have learned so much from everyone. Good and bad. But my well-being has to come first and all of this darkness and carefully calculated division has taken its toll.” 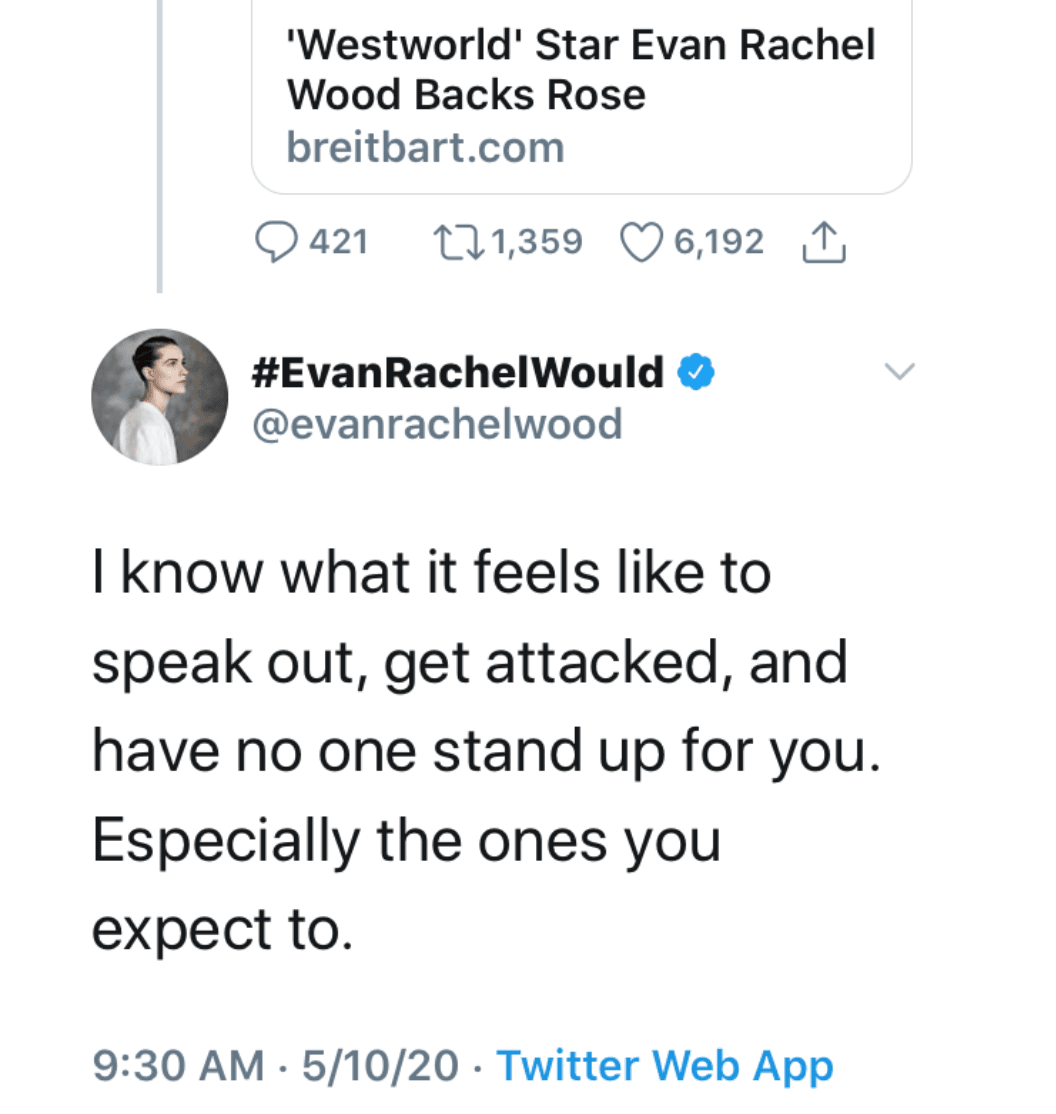 The actress said she doesn’t know when she will return to Twitter. “Good luck out there guys. Love to all the loyal followers.”

This comes a week after Wood stood up for fellow Hollywood star Rose McGowan, who had recently criticized Democrats and their allies in the media for their treatment of Tara Reade. McGowan recounted that she has experienced a political wake-up call following the left’s efforts to downplay Reade’s sexual assault accusations against Biden.

“Republicans have always been painted as the bad guys, and I’ve always seen them more as a cult, but now I realize so are democrats and the media,” she wrote.

Wood appears to be the only Hollywood figure to publicly support McGowan. On Sunday, Wood tweeted to McGowan, “I know what it feels like to speak out, get attacked, and have no one stand up for you. Especially the ones you expect to.”

Last week, Wood described McGowan’s critique of the left as “spot on.”

Evan Rachel Wood has stated in the past that she has been raped twice. “Yes. I have been raped,” she wrote in 2016. “By a significant other while we were together. And on a separate occasion, by the owner of a bar.”

She also testified before members of Congress in 2018 about her experiences.

“Seven years after my rapes — plural — I was diagnosed with long-term PTSD, which I had been living with all that time without knowledge about my condition. I simply thought I was going crazy,” she said at the hearing.

McGowan has accused Harvey Weinstein of raping her and Hollywood elites of ignoring her allegations for years.