Evan Rachel Wood tweeted her support of Rose McGowan, writing “I have to say this is… spot on,” in response to McGowan’s recent statement describing her disillusionment with the left-wing establishment, calling them a “cult.” 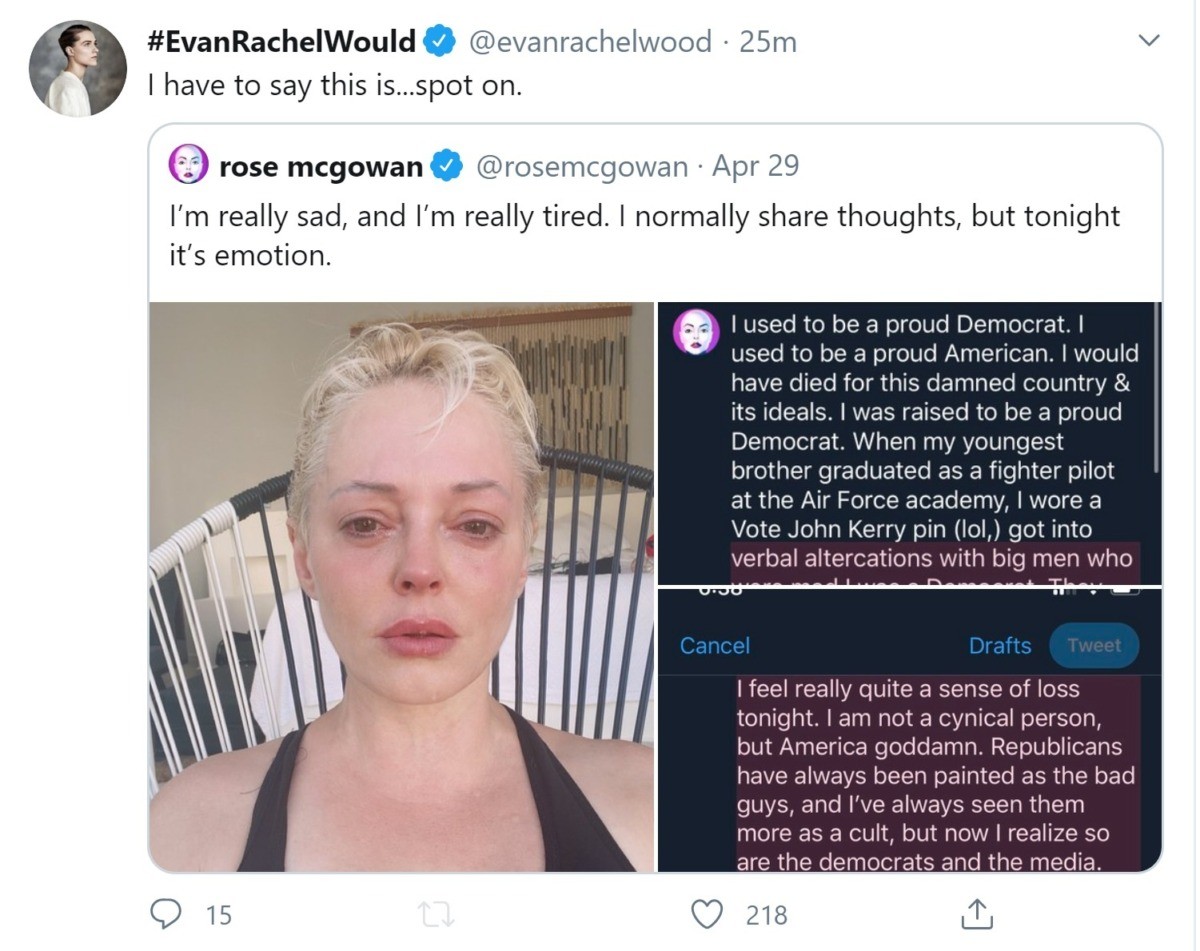 McGowan wrote in a tweet on Thursday that she has experienced a political wake-up call in light of Reade’s accusations against Biden and the mainstream media’s efforts to downplay them.

“Republicans have always been painted as the bad guys, and I’ve always seen them more as a cult, but now I realize so are democrats and the media,” she wrote.

In a separate statement on Saturday, McGowan called out the mainstream media, women’s groups, LGBTQ news outlets, Oprah Winfrey, and even feminists like Gloria Steinem for their continued backing of Biden’s campaign.

“Fuck you to the silent media, fuck you to women’s groups, Gloria Steinem, & fucking take ass Oprah, fuck you,” she wrote. “All of you crow about your bravery yet you do nothing.” She also accused the New York Times of sitting on its Tara Reade investigation until Biden became the presumptive Democrat nominee.

“Those bunch of cunts,” McGowan wrote. “I hate cowards. I hate liars, and I really hate rapists.”

Like McGowan, Wood has previously stated that she is the victim of sexual assault, writing in a 2016 tweet that she has been raped twice. “Yes. I have been raped,” she wrote. “By a significant other while we were together. And on a separate occasion, by the owner of a bar.”

Wood also testified before members of Congress in 2018 about her experiences.

“Even though these experiences happened a decade ago, I still struggle with the aftermath,” she said. “My relationship suffers, my partners suffer, my mental and physical health suffer. Seven years after my rapes — plural — I was diagnosed with long-term PTSD, which I had been living with all that time without knowledge about my condition. I simply thought I was going crazy.”

Tara Reade has alleged that Joe Biden sexually assaulted her in 1993 when she was working as a Senate staffer, claiming that Biden used his fingers to penetrate her against her will.

Biden broke his long silence on the allegations on Friday, saying on MSNBC that “it never, never happened.”

The Democrat candidate has garnered widespread support in Hollywood from celebrities and executives. But in recent days, a few major names have begun cautiously expressing their reservations about the presumptive nominee.

Sarah Silverman recently called out Sen. Kirsten Gillibrand (D-NY) for her support of Biden, while actress Susan Sarandon has retweeted articles that back Reade’s accusations.

Sarandon has also praised a Democratic challenger to Speaker of the House Nancy Pelosi (D-CA), after Pelosi officially endorsed Biden.