Comedian and perennial Trump antagonist Kathy Griffin is advocating for the physical assault of the president, tweeting that she wants someone to stab the commander in chief with a “syringe with nothing but air inside” — a potentially lethal act if it creates an embolism.

Physically threatening the president of the United States is a federal offense. Physical threats also constitute a violation of Twitter’s terms of service that can result in permanently getting kicked off the platform. “We will immediately and permanently suspend any account found to be posting violent threats,” the social media giant says on its official site.

Kathy Griffin made the alarming threat in two tweets posted late Tuesday. In the first tweet, she was responding to President Trump’s comments made during a White House event for diabetes. The president said that he doesn’t use insulin, to which Griffin replied: “Syringe with nothing but air inside would do the trick. FUCK TRUMP.” 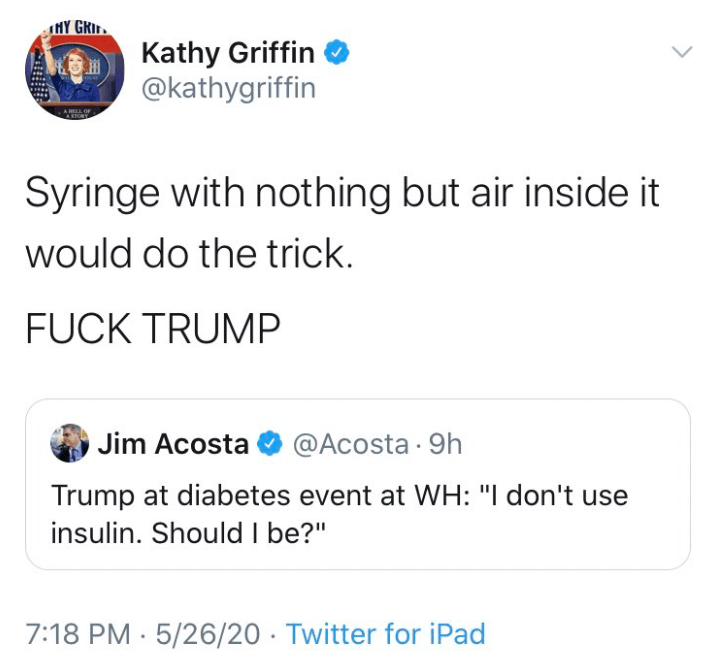 Later, Griffin confirmed a tweet from the Washington Examiner that said the comedian is advocating “for someone to stab [Trump] with syringe full of air. Air embolisms, caused by air getting into the bloodstream, can be fatal.”

Griffin responded: “I SURE DID, FUCKER.”

A spokesperson for Twitter didn’t immediately respond to request for comment about Griffin’s physical threat to the president.

Twitter says in its terms of service that “you may not threaten violence against an individual or a group of people. We also prohibit the glorification of violence.”  The company said it defines violent threats as “statements of an intent to kill or inflict serious physical harm on a specific person or group of people.”
Griffin’s account still appeared active as of early Wednesday.

Federal law states that individuals who physically threaten the president can face up to five years in prison.

In 2017, Griffin posed with the mock severed head of President Trump in an infamous photo. The controversial image caused her to be fired from her job hosting CNN’s annual New Year’s Eve broadcast.

On Wednesday Twitter removed Kathy Griffin’s tweet in which she said a “syringe with nothing but air inside it would do the trick” on President Donald Trump. A screenshot of Griffin’s original tweet has been added to this article.