Comedian and actor Patton Oswalt is defending the violent, far-left Antifa after President Donald Trump announced Sunday that the U.S. will classify the extremist group as a terrorist organization.

“I’m 100% with you Donald!” Oswalt tweeted sarcastically with a photo of the World War II D-Day landing. “Antifa has been horrible for so long. Here’s some anti-fascists ruining a perfectly good beach day in France! Wish you could have been there to stop them!”

I’m 100% with you Donald! Antifa has been horrible for so long. Here’s some anti-fascists ruining a perfectly good beach day in France! Wish you could have been there to stop them! https://t.co/1eOBVIdNYm pic.twitter.com/caPzj7ojaB 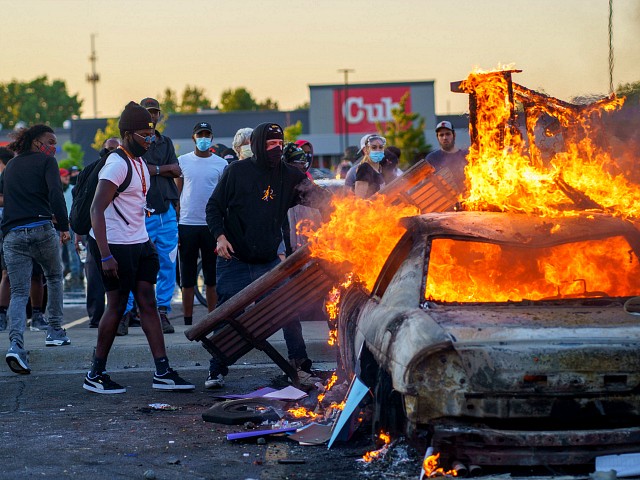 Protesters throw objects onto a burning car outside a Target store near the Third Police Precinct on May 28, 2020 in Minneapolis, Minnesota, during a demonstration over the death of George Floyd, an unarmed black man, who died after a police officer kneeled on his neck for several minutes. (KEREM YUCEL/AFP via Getty Images) 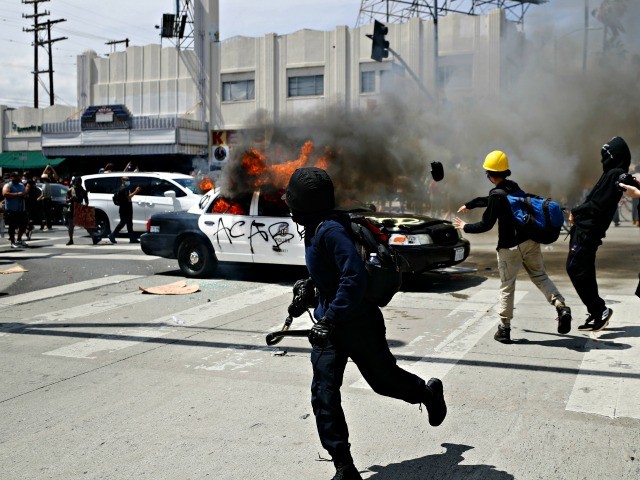 An LAPD vehicle burns after being set alight by protestors during demonstrations following the death of George Floyd on May 30, 2020 in Los Angeles, California. (Mario Tama/Getty Images)

Oswalt’s conflation of Antifa with U.S. soldiers who fought Nazi Germany during World War II is a common tactic used among left-wing defenders of the extremist organization who take the name “Antifa,” or “anti-fascist,” at face value.

Following President Trump’s  announcement on Sunday, Twitter was flooded with users who expressed solidarity with the violent group by tweeingd the hashtag #IamAntifa while also noting relatives who fought during World War II.

@realDonaldTrump I am an anti-facist. Why TF aren't you?! #IAmAntifa pic.twitter.com/7K0IPEnY9u

My grandfather died in WWII fighting fascists.
I am his granddaughter.
I am anti fascist. #IAmAntifa

My grandfather died on a submarine on VE Day during World War II.
In fact, many of my family members fought Nazis and fascism. Many of them, along with thousands of others, died doing so.
I am anti-fascist.
I am Antifa.#IAmAntifa https://t.co/6engOWZWPc

My grandfather fought against fascism in World War II #IAmAntifa

In reality, Antifa is an extremist group that uses physical violence to intimidate ideological opponents. Antifa rioters tend to dress in all black — so-called “black bloc” — with their faces covered in order to conceal their identities from law enforcement.

Antifa members have physically assaulted conservatives and supporters of President Trump. They have also destroyed property and set buildings ablaze during protests against prominent conservatives, including the 2017 Berkeley protests that resulted in significant damage to the UC Berkeley campus.

Journalist Andy Ngo was physically attacked by Antifa members during a 2019 clash in Portland, Oregon, which has become a hot bed of Antifa activity.

The mainstream media has tended to ignore or downplay Antifa’s violent tactics, often referring to the group by the less threatening name “Anti-fascists.”

Atty. General William Barr said Sunday that Antifa has hijacked the protests following the death of George Floyd in Minneapolis in order to promote its own violent goals.

“The voices of peaceful and legitimate protests have been hijacked by violent radical elements. Groups of outside radicals and agitators are exploiting the situation to pursue their own separate, violent, and extremist agenda,” Barr said.

He said the Justice Department will treat violence carried out or instigated by Antifa and other similar groups in connection with the rioting as  “domestic terrorism.”

Attorney General Barr’s statement on rioting, the role of the Department of Justice, and Antifa.

“The violence instigated and carried out by Antifa and other similar groups in connection with the rioting is domestic terrorism and will be treated accordingly.” pic.twitter.com/6aKElRYZdR