Rocker Jon Bon Jovi, who hit the campaign trail for Hillary Clinton’s losing White House run in 2016, is at it again, this time teaming up with Joe Biden on Saturday in battleground Pennsylvania.

The “Livin’ on a Prayer” singer, who’s, by the way, worth an estimated $410 million, will join Biden for a drive-in event in Luzerne County — a county Trump won by over 19 percent in 2016. Bon Jovi will perform at least three songs, according to reports. Biden is expected to make a final pitch to Pennsylvanians, encouraging them to “make a plan to vote.”

Bon Jovi, the self-described “poster boy” for white privilege campaigned for Hillary Clinton in 2016 while telling the public that Trump’s candidacy “scares the shit out of me.”

“I pray he’s not the next president of the United States,” he told the website Gigwise at the time. The Clinton family walks on stage and is greeted by Lady Gaga and Jon Bon Jovi inside the Reynolds Coliseum on the campus of North Carolina State University for the final campaign stop before election day, in Raleigh, North Carolina, on November 7, 2016. LOGAN CYRUS/AFP/Getty Images

“I believe we need to respond with a strong call for unity and a renewed sense of shared purpose. I can’t think of anyone better than Cory Booker to rise to the challenge,” Bon Jovi said in an email, calling him a “great man who would do an amazing job in the White House.” 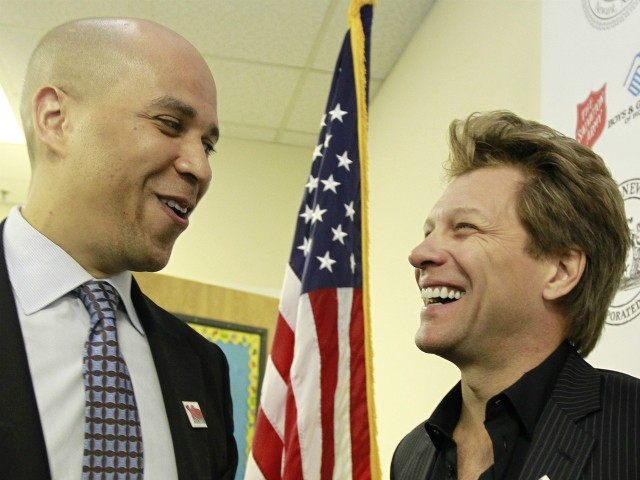 The Grammy Award-winner is not the only celebrity figure the Biden campaign is recruiting in the final days of the presidential race. Pop star Lizzo spoke at a volunteer canvasser event in Detroit on Friday on behalf of Biden and his running mate, Sen. Kamala Harris (D-CA), and Oscar-winner Cher is expected to visit Las Vegas, Nevada, on Saturday and Phoenix, Arizona, on Sunday “to speak on behalf of BIDEN HARRIS”:

Going Nevada & Arizona to speak on behalf of BIDEN HARRIS

Several performers, including Bon Jovi, Lizzo, Cher, the Black Eyed Peas, and John Legend are expected to participate in an “I Will Vote” concert on Sunday, which actress Amy Schumer is slated to host.