Georgia is centerstage for the battle for the balance of power in Washington, D.C., as control of the U.S. Senate now hinges on the outcome of the two Senate runoff races in the state. A few weeks ago Sen. Chuck Schumer (D-NY) declared, “Now we take Georgia, and then we change America.” Now actress and left-wing activist Amy Schumer, the senator’s second cousin, is telling Georgians that they will “decide the future of America” in the January 5th runoffs.

Amy Schumer took to Twitter to tell her followers in the Peach State how to register to vote and even get their ballot in early. “Georgia, in this runoff election, you will decide the future of America,” she wrote. “Here’s how to make your voice heard: Check your voter registration status. The deadline to register to vote is 12/7. If you turn 18 before Jan. 5, please register to vote! Early voting begins 12/14.”

Georgia, in this runoff election, you will decide the future of America.
Here’s how to make your voice heard:
1️⃣ Check your voter registration status. The deadline to register to vote is 12/7. If you turn 18 before Jan. 5, please register to vote!
2️⃣ Early voting begins 12/14. pic.twitter.com/lOyVTFM0GT

The I Feel Pretty star, who previously urged people to boycott the state of Georgia over the state’s pro-life abortion legislation, called on people to get behind Democratic candidates Jon Ossoff and Raphael Warnock.

“Georgia is powerful always! But now more than ever. Democrats @jonossoff and @raphaelwarnock both need to win their runoffs in order for us to have the Senate majority,” Amy Schumer  wrote at the time. “We need that because without it that actual lizard Mitch mccongross [sic] will continue to block all the things we all care about including HEALTHCARE, RACIAL JUSTICE, THE ECONOMY, GUN SAFETY, CLIMATE CHANGE, RIGHTS FOR LGBTQ and on and on.”

A long-term left-wing activist, Schumer was heavily involved in efforts to elect Joe Biden over Donald Trump. In late October, she even hosted a concert featuring various left-wing singers and artists including Cher and John Legend aimed at increasing turnout for Democrats and the Biden-Harris campaign.

This is an event you won’t want to miss! I’m hosting a concert with a great group of artists to support @JoeBiden, @KamalaHarris and Democrats down the ballot. Do your part. Join us: https://t.co/KiQRTM9I2R pic.twitter.com/ycGe9CSDVL

As well as campaigning for Biden, Schumer has been involved in numerous other progressive campaigns, particularly on the issue of gun control. She was also prominent in the smear effort against Justice Brett Kavanaugh during his Supreme Court confirmation hearings in an unsuccessful attempt to derail his nomination with highly dubious sexual assault allegations. A vociferous opponent of Donald Trump, she previously pledged to leave the country if he became president. She later backtracked on her pledge, claiming it was merely a joke. 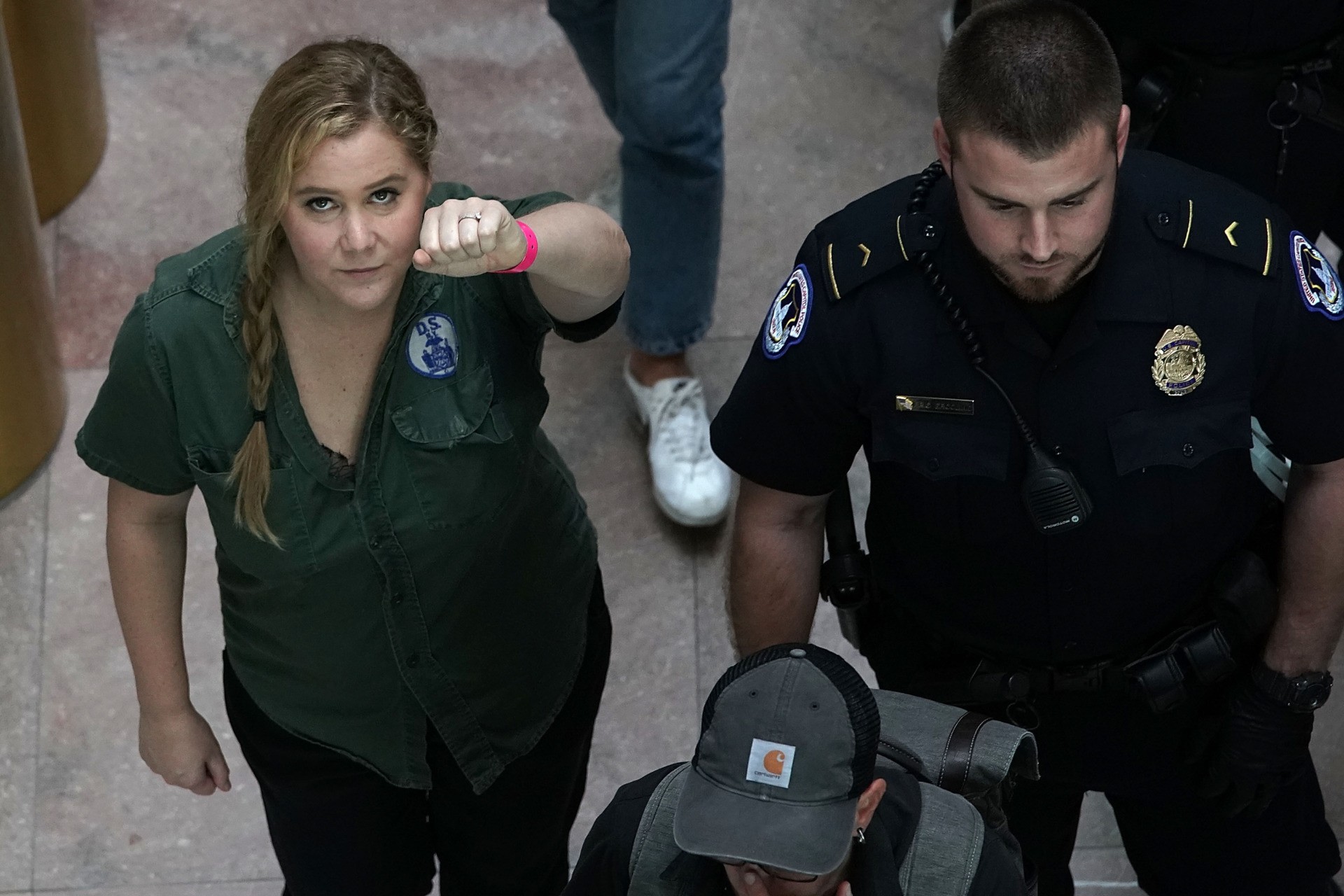 Comedian Amy Schumer (L) is led away after she was arrested during a protest against the confirmation of Supreme Court nominee Judge Brett Kavanaugh October 4, 2018 at the Hart Senate Office Building on Capitol Hill in Washington, DC. Senators had an opportunity to review a new FBI background investigation into accusations of sexual assault against Kavanaugh and Republican leaders are moving to have a vote on his confirmation this weekend. (Alex Wong/Getty Images)

Schumer is one of the dozens of Hollywood stars currently campaigning to flip the Senate for Georgia. Other stars including Alec Baldwin, Debra Messing, Amy Schumer, John Leguizamo, Alyssa Milano, Billy Eichner have participated in everything from phone banking to fundraising in the hope that it will get Democrats to a split Senate, allowing them to push through legislation with the deciding vote of prospective vice-president Kamala Harris.

Both seats are of critical importance to whether a potential President Joe Biden would be able to push through any of his left-wing such as packing of the Supreme Court, the Green New Deal, and giving statehood to Puerto Rico and Washington D.C in order to increase Democrats’s electoral chances. Polling data on the two races currently has them too close to call, meaning both sides will likely ramp up campaigning efforts in the coming weeks.