The Hollywood actress recently tweeted that she regrets not physically attacking Sen. Rand Paul (R-KY), saying she wishes she had thrown a drink in his face after spotting the lawmaker at a restaurant in Los Angeles. “I quietly seethed at him but didn’t throw a drink in his face and now I really regret that choice,” she said in a tweet Wednesday.

Assaulting a member of Congress is a felony under federal law. 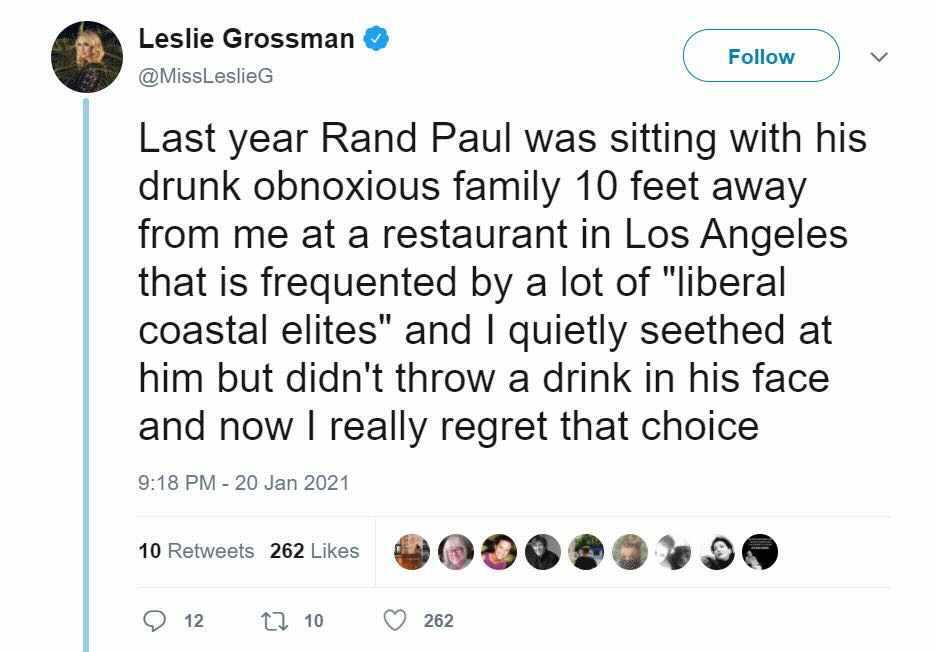 In a subsequent tweet, the actress said “I really blew it and I see that now.” It remains unclear if she was referring to her missed opportunity to assault the senator, or to the ill-advised nature of her prior tweet.

Alec Baldwin tweeted his desire to see a noose hanging outside of a courthouse during President Donald Trump’s “sedition” trial.

Messing deleted her rape-fantasy tweet but continues to have access to the social media platform. Baldwin announced this week he is taking a voluntary break from Twitter.

Twitter permanently banned Donald Trump earlier this month, claiming that the then-president violated the platform’s rule prohibiting the “glorification of violence.” Neither of the two Trump tweets in question references violence in any way. But Twitter justified its ban on the president, saying that the tweets could potentially lead to violence.

Sen. Paul has been the target of physical assaults in the recent past. The senator was attacked by a neighbor in 2017, resulting in fractured ribs and other injuries. During the Black Lives Matter riots last year, Paul and his wife were accosted by rioters who threatened them as they were heading home from the White House.