The Grammys on Sunday featured a speech by Tamika Mallory, the left-wing activist who left the Women’s March in 2019 after being accused of antisemitism, including her support of racist and and antisemite Nation of Islam leader Louis Farrakhan.

Rapper Lil Baby turned the Grammys stage on Sunday night into a riot scene that mirrored the deadly and violent protests that gripped the nation in response to the death of George Floyd. Lil Baby’s performance of his song “The Bigger Picture” included a speech from Black Lives Matter activist Tamika D. Mallory, who looked into the camera and demanded President Joe Biden bring “justice, equity, policy, and everything else that freedom encompasses.”

Mallory’s speech was staged to recreate the Black Lives Matter protests in Los Angeles in May 2020. Lil Baby’s performance also included a mock confrontation with police, and burning buildings. At one point he performed atop a police car.

It’s a state of emergency. It’s been a hell of a year. Hell for over 400 years. My people, it’s time we stand. It’s time we demand the freedom that this land promises. President Biden, we demand justice, equity, policy and everything else that freedom encompasses, and to accomplish this, we don’t need allies. We need accomplices. It’s bigger than black and white. This is not a trend, this is our plight. Until freedom.

Mallory has a long association with Farrakhan, a notorious bigot who referred to Jews as “termites” in 2018. 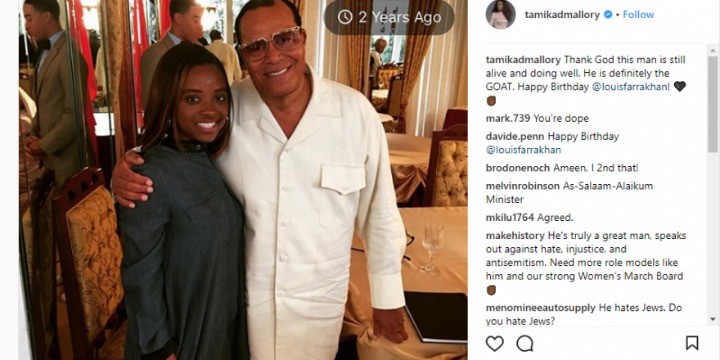 The Wall Street Journal noted, “Ms. Mallory attended a Farrakhan speech in February 2018 in which he denounced Jews as ‘children of the devil’ and gave her a nice personal mention.”

Mallory also made an antisemitic comment of her own in defending Farrakhan, referring to his critics as “enemies of Jesus”:

If your leader does not have the same enemies as Jesus, they may not be THE leader! Study the Bible and u will find the similarities. Ostracizing, ridicule and rejection is a painful part of the process…but faith is the substance of things!

According to Tablet magazine in 2018, Mallory and another Women’s March leader claimed “that Jewish people bore a special collective responsibility as exploiters of black and brown people—and even, according to a close secondhand source, claimed that Jews were proven to have been leaders of the American slave trade.”

These views apparently accorded with Farrakhan’s teachings. Mallory denied the statement, but other activists recalled her “berating” another leader in the Women’s March about her Jewish identity.

The association of Mallory and other Women’s March leaders with Farrakhan led many Democrats, eventually, to distance themselves from the movement, noting that Mallory and others “have allowed anti-Semitism, anti-LBGTQIA sentiment and hateful, racist rhetoric to become a part of the platform’ of the march.”

Mallory also attacked the founding of Israel as a “human rights crime” after a tour of Israel in 2018 with the George Soros-funded Center for Constitutional Rights, and has refused to acknowledge Israel’s right to exist.

Mallory eventually left the Women’s March board, but found her way Sunday onto the Grammys stage in a celebration of the Los Angeles Black Lives Matter riots of 2020 — which happened, at the time, to include the vandalism of synagogues and the looting of Jewish-owned stores.