Grammy-winning singer Macy Gray bashed the American flag as “tattered, dated, divisive, and incorrect” in an op-ed published a day before Juneteenth. Gray says it is time for a “new flag” that “represents ALL of us,” as Old Glory “no longer represents democracy and freedom.”

In a Thursday op-ed, the “I Try” singer said the American flag has been “hijacked as code for a specific belief.”

The R&B singer took issue with the stars, specifically, contending that there should be 52 rather than 50 — one for Washington, DC, and the other for Puerto Rico. She briefly lamented their lack of statehood, which she is convinced is rooted in racism.

“Assuming D.C. reps would be African-American and Puerto Rican reps would be Hispanic, the ultimate assumption is that these elected officials would be Democratic. That alone is racist,” she wrote.

Indeed, the Juneteenth flag’s colors are red, white, and blue and it’s flown since 1997.

The stripes on the American flag, Gray said, are also problematic. Citing Smithsonian documents stating that the “white” stripes represent purity and innocent, she quipped, “Pure, it ain’t. It is broken and in pieces.”

“What if the stripes were OFF-white? What if there were 52 stars to include D.C. and Puerto Rico? What if the stars were the colors of ALL of us — your skin tone and mine — like the melanin scale?” she asked.

“The blue square represents vigilance and perseverance; and the red stripes stand for valor. America is all of those things. So, what if those elements on the flag remained? What if the flag looked like this?” she asked, providing an image showcasing an American flag-esque design featuring gray stripes and 52 stars in multiple skin tone colors. 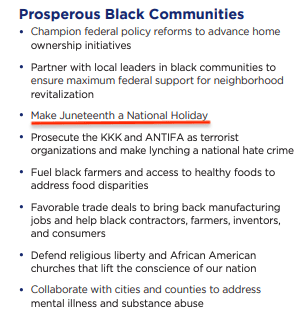 The Trump White House released the Platinum Plan in Sept. 2020. It aimed to create 3 million jobs for black Americans, with $500 billion for economic, educational, and financial investments in black communities across the country.

Let’s call the USA what it is – decadent on the fast track to autocracy – living on the atavistic fumes of ww 2 greatest generation Tver actually took on fascism and beat it down –
We can’t even arrest open criminals in gop- nor a mentally ill white supremacist lawless thug https://t.co/8lkdKOp6wF

We aren’t great – we aren’t even mediocre – we’re fucking awful – full of cowards and corporate whores – Boeing gets to take out tax dollars – parade our soldiers – wrap themselves in the flag – while financially backing fascists ?
We have no leaders – no soul –
Just greed – https://t.co/AxYRvPTNtP