Three times now, I’ve sat through 2018’s Halloween, which we’re told is the one true sequel to John Carpenter’s 1978 masterpiece. All those other sequels and Rob Zombie’s dreadful 2007 reboot? Out the window. This even includes the sequels starring Jamie Lee Curtis, and two out of three of those are pretty great, most especially Steve Miner’s Halloween H20: 20 Years Later.

Anyway, I didn’t care for Halloween (2018). Not the first time I saw it on opening night for review purposes. Not the second time I saw it in the hope I would enjoy it more. Not last night, when I watched it knowing Halloween Kills picks up right where its predecessor left off.

Halloween (2018) has its moments, but it’s never scary, and the geography makes no sense. Michael Myers wanders aimlessly around Haddonfield — which now includes forests, estates, and rural areas. He pops up here. He pops up there. Wherever the script needs him, he arrives on time and ready for his close-up.

Halloween Kills does not have this problem, but Halloween Kills does (just like 1981’s original Halloween II) pick up moments after Halloween (2018) ends. Michael is left to burn alive in Laurie Strode’s prepper compound. The Strode women —  Grandma Laurie (Jamie Lee Curtis), daughter Karen (Judy Greer), and granddaughter Allyson (Andi Matichak) — are bloody but alive, and on their way to the hospital, certain they have finally destroyed the evil that has so emotionally battered and bruised their respective lives. 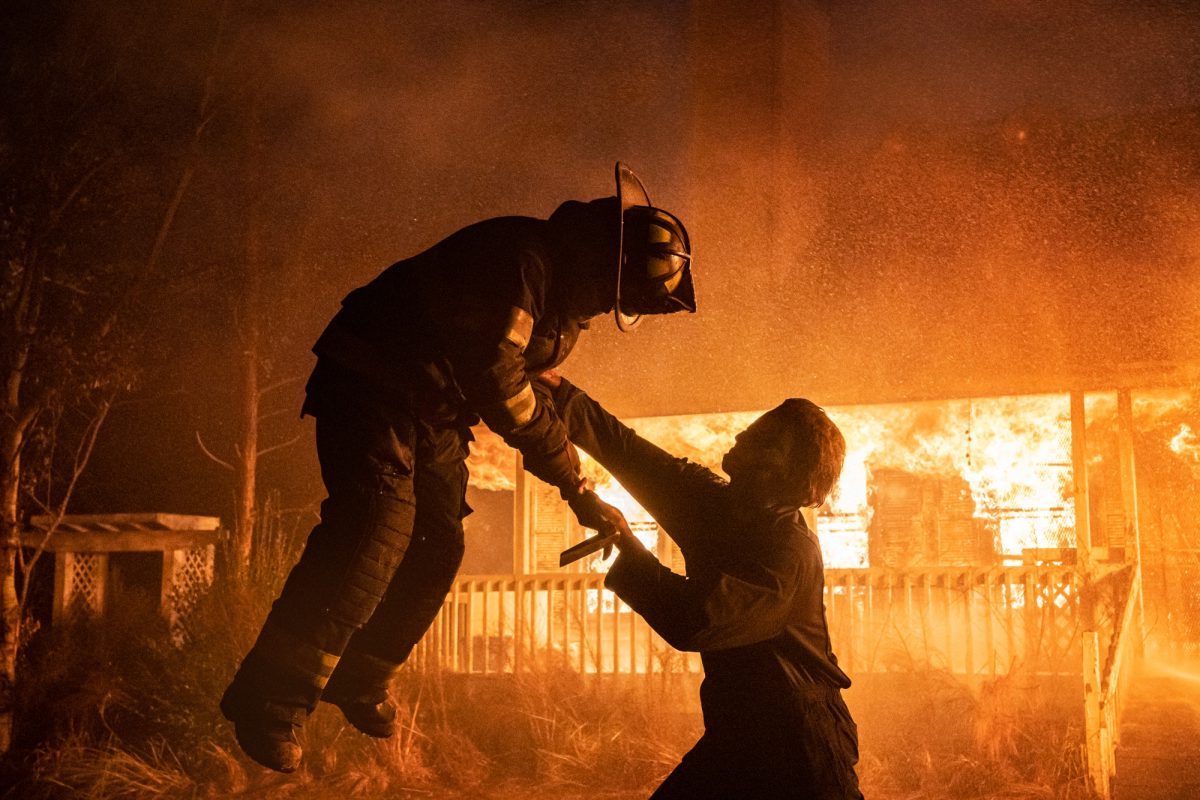 Also unaware Michael is on the loose are the attendees of that night’s gang of survivors, including Tommy Doyle and Lindsey, the kids Laurie babysat on that first Halloween 40 years ago. Anthony Michael Hall plays Tommy, but Kyle Richards returns (looking good!) 40-years later as Lindsey. Also returning from the original are Nancy Stephens as Marion Chambers, the nurse who was with Dr. Loomis the night Michael escaped (she also appeared in Halloween II (1981) and was killed in Halloween: H20, but those don’t count anymore); and Charles Cypers as Sheriff Leigh Brackett.

If this sounds like roll-your-eyes-for-more-shitty-fan-service, it’s not. Co-writer, director David Gordon Green has assembled these familiar faces for a reason. Once they discover Michael is loose again, nothing’s going to stop them from putting an amen to this thing that’s haunted them for four decades. So they grab some guns, some baseball bats, a bunch of fellow Haddonfield residents, and hit the streets looking for payback.

This Haddonfield Mob is what makes the movie work so well, is the device Green and his co-writers (Danny McBride and Scott Teems) use to turn Halloween Kills into what I call “true horror,” a story without mercy or sentiment. In this age of the Woke Gestapo, you expect to get hit with a deep and profound message about the evils of mob violence or the importance of community organizing. But Halloween Kills isn’t interested in any of that. Instead, the movie laughs at the very idea that in the presence of naked evil, there’s going to be a lesson learned.

Watching the twists and turns that come with how Green portrays the mob at first had me thinking, This movie’s a thematic mess. You see, initially, we’re inspired by Tommy Doyle saying Enough! Let’s get him! Evil dies tonight! Then things go wrong. But then Laurie Strode herself is all, Get that motherfucker, Tommy. The system failed us! But then things go really wrong. But then the movie’s conscience joins the mob, and Tommy says if he goes down, he’s going down swinging, and you’re all HELL YEAH! — and then, and then…

By the time it was over, and the last 15 minutes are as good as horror movies get, I realized this “thematic mess” was deliberate, that it had me on the edge of my seat, that it turned the predictability that comes with the slasher genre into a wild ride of horror and gore. I had no idea what would happen next, which made for one shock after another.

In other words, instead of looking to teach us a trite lesson about vigilantism, the filmmakers use our expectations of being taught that lesson to mess with our heads, to further a more prominent theme, the one explored in Halloween (2018), that evil’s gunna evil and you’re wasting your time looking for motive or reason.

Something else Halloween Kills does better than its predecessor is, in a very short time, create sympathetic victims.

Also more apparent is Michael’s seething but controlled rage, which ups the stakes (and kills) considerably.

That’s not to say Halloween Kills is perfect. A lot of people do a lot of stupid things, and at times, especially when Michael’s vulnerable, it’s frustrating as hell, not to mention contrived.

Overall, though, Halloween Kill is a great time and does a beautiful job of setting up the final chapter in the trilogy, Halloween Ends, which arrives at this same time next year.

All that’s missing from Halloween Kills is some gratuitous T&A.

I can’t even begin to describe how much I miss gratuitous T&A.