Netflix’s $200 million Red Notice is a welcome oasis of pure fun, big laughs, star chemistry, and adventure in a desert of Woke Oppression.

Watching a new release these days means having your guard up. In this era of Woke Nazism, you can never fully relax as you wait for the man-on-man kiss, the anti-science transsexual propaganda, the attack on “whiteness,” the feminist screed, or whatever else these godless fascists have in mind to ruin our good time.

And make no mistake, they love ruining our good time. They get off on it. Honestly, if I weren’t overpaid to review movies, I wouldn’t bother anymore.

About a half-hour into writer-director Rawson Marshall Thurber’s Red Notice, I not only began to relax, I thought to myself, Oh, yeah, this is what going to the movies used to feel like. Why did I think that? Because all of a sudden, I realized I was having a great time.

Red Notice is a total blast, a woketard-free zone from beginning to end, one full of action, laughs, and even sex appeal. Ohmygawd, is that actual cleavage?

Gal Gadot, from head to toe, from her smoky voice to the way she carries herself, is one of the sexiest and most charismatic actresses to grace the screen in decades (Charlize Theron who?), and brother does she turn it up to 11 here.

It’s so good to have you back, Mr. Male Gaze. Please take your coat off and stay awhile.

Red Notice is, by far, Gadot’s most appealing performance to date.

As “The Bishop,” the “number one art thief in the world,” you can tell Gadot is having a blast. Every scene she embraces with gusto and confidence. She’s funny, cool, able to handle herself, and always a woman. 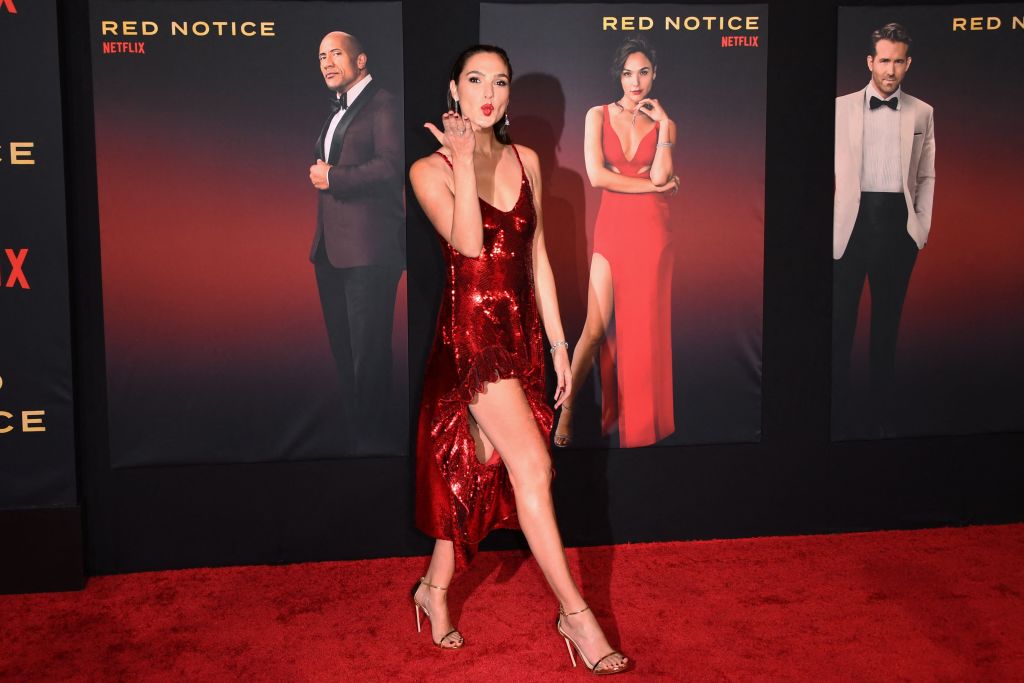 Gadot delivers what’s known as a “movie star” performance. Robert Downey Jr. in Iron Man (2008) or Johnny Depp in that first Pirates movie are recent examples of this. You might not win an Oscar, but you win the kind of audience goodwill that can carry your career beyond franchise films.

Just as good is Ryan Reynolds. You know, I’ve never been much of a fan of his wisecracking personality. That just changed. As Nolan Booth, the “number two art thief in the world,” Reynolds is laugh-out-loud hilarious, today’s version of Bob Hope, a guy who must walk around with a team of genius joke writers.

Along for the ride is Dwayne Johnson as F.B.I. Agent John Hartley, who does the smartest thing a leading man can… He gets out of the way, puts his ego aside, and shines in the golden glow of his co-stars. He’s the straight man here and a very good and even generous one.

The plot surrounds the hunt for Cleopatra’s Golden Eggs, three priceless artifacts that offer something beyond money to Booth and The Bishop: the opportunity for world-trotting adventure and to prove you’re the best in the world.

Hartley is tasked with stopping them, ends up getting framed, and is forced to join the hunt.

What you get in Red Notice is the irony-free exuberance of National Treasure (2004), mixed with the panache of True Lies (1994), sprinkled with the gung-ho spirit of The Mummy (1999), simmering on the chemistry, charm, and perfect amount self-referential moments of those wonderful Bob Hope, Bing Crosby, Dorothy Lamour Road pictures.

Yes, Red Notice teases a sequel. Better than that, though, it leaves our characters in a perfect place, in that place where we remember them as we want to remember them: unchanged and forever enjoying adventures together.

Oh, and Red Notice not only tells its story in under two hours, instead of leaving you exhausted, it leaves you wanting more. It’s like traveling back in time to when Hollywood still knew how to put on a show.

Best of all, you can enjoy it with the whole family. I can’t wait to see it again.