Scream (2022) is a tired and unimaginative “requel,” or a sequel-reboot-remake of the original Scream (1996). Unfortunately, the scariest thing about it is what Courtney Cox has done to her face.

If you want a perfect example of that inexplicable thing that separates genius directors from run-of-the-mill directors, compare the opening sequence in the original Scream to the similar opening of this unnecessary sequel/reboot/remake, which has two directors: Matt Bettinelli-Olpin and Tyler Gillett.

Wes Craven was a genius. We lost him in 2015, but the legacy he left behind is second-to-none. His debut features — The Last House on the Left (1972) and The Hills Have Eyes (1977) — are still two of the most brutally terrifying movies ever made. Add to that his most famous creation, Freddy Krueger, and his brilliant handling of screenwriter Kevin Williamson’s original Scream (1996), which singlehandedly rejuvenated the horror genre for 26 years and counting.

From open to close, Craven’s Scream is a tour de force. You’re terrified and amused and buy into every moment. Most of all, you care about the characters and feel every stab and slash of that knife (especially in the unforgettable third act). With the same flair, Craven directed the three immediate sequels, and while each was something less than its predecessor, he still elevated them, as did a charismatic cast.

Scream (2022), which was not written by Williamson, has none of that. It’s never scary. It looks flat and cheap. There’s only one sequence that creates a little suspense, at least until all the fake-outs wear you down. The new cast is a bunch of generic and uninteresting teens. Two of the original cast members — Neve Campbell and Courtney Cox —are relegated to a Greek chorus spouting knowing wisecracks from the background. The only performer allowed to leave any kind of mark is David Arquette, whose retired Sheriff Dewey Riley is now a shell of himself, a man who must be shamed into action

Then there’s the incessant meta-commentary, the oppressive self-referential comments about horror genre tropes, including the rules of “requels.” Thanks to Williamson’s deft writing and the charm of the original cast — especially Jamie Kennedy, who served up most of that commentary — this idea felt fresh and clever 26 years ago. It was also a bit of a relief to see a slasher movie take place in the real world where teens are familiar with horror movies and try to avoid the victims’ mistakes. Well, what was clever and refreshing a quarter-century ago, now comes off as tedious and unbearably smug. 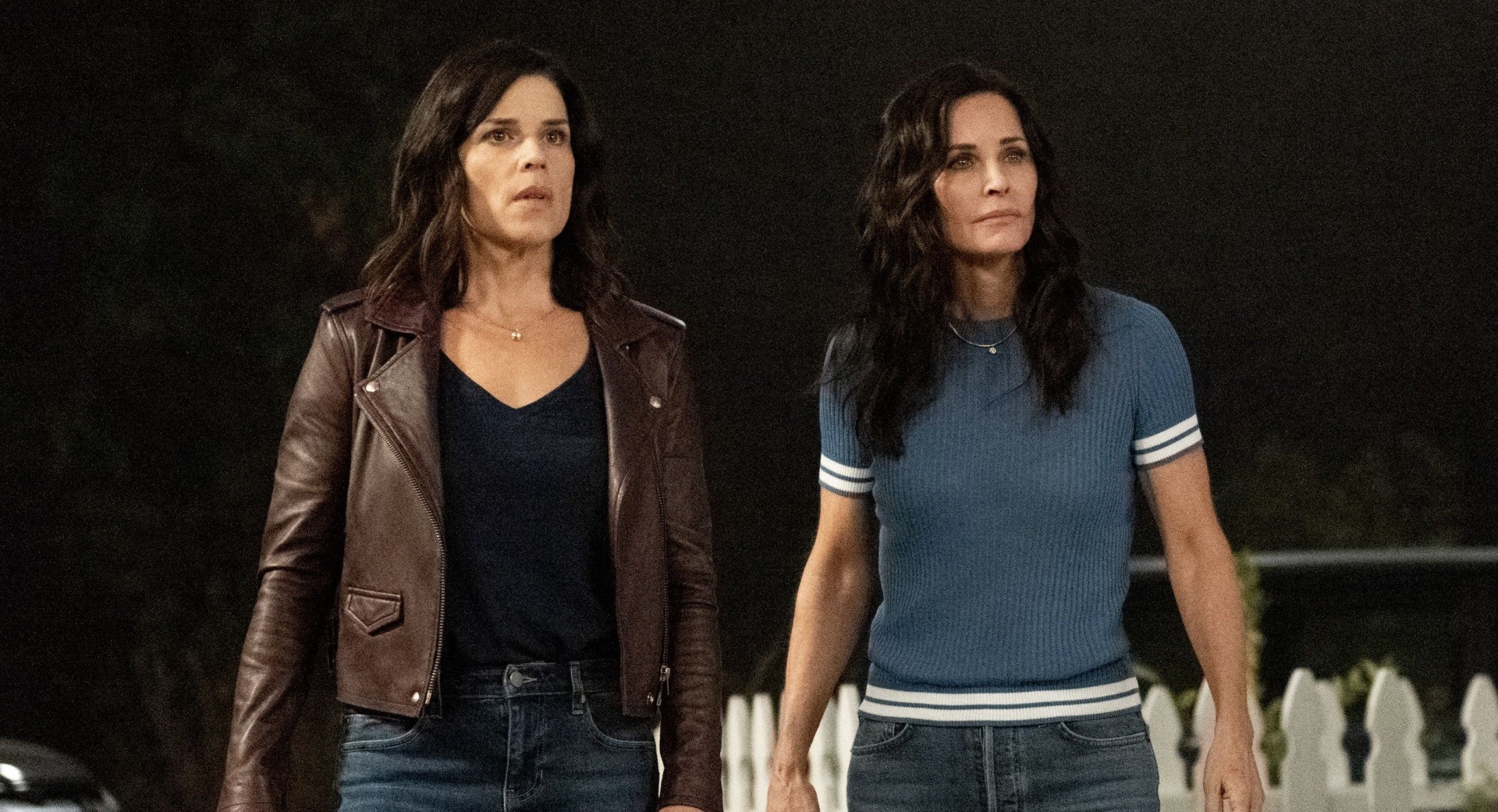 There’s nothing to the plot. Ghostface returns and starts knifing people. It’s another slasher/whodunit where the middle-aged survivors of Scream 1-4 never feel like they belong, look a little bored, and still blow their youthful counterparts off the screen.

Worst of all, despite their smug knowledge of how horror movies work, people behave in ridiculously stupid ways. The movie itself is just as dumb, not to mention contrived. Why did an entire hospital wing empty out of patients and personnel, except for our potential victim?  Brutal killings take place outdoors in broad daylight. People know a slasher is on the loose and still leave their kids alone to buy sushi. Oh, and after four previous Ghostface slayings, no one in Woodsboro carries a gun. No one has an alarm system. After finding it open, no one runs out the front door to the police station. No one has a panic room.

Other than nostalgia, Scream (2022) has nothing to offer.