An E.U. climate summit was at risk of being delayed or canceled Thursday after Greenpeace activists scaled the planned venue and set off flares before chaining themselves to the building in protest at the “slowness” of global climate action.

The 28-strong group managed to climb the building by using the ladder of an old fire truck and has enough food to last for two days, according to Greenpeace spokesman Mark Breddy.

“The police are currently intervening. The summit will go ahead, but consideration is being given whether to relocate it to the Justus Lipsius building,” said an internal message to E.U. staff.

The team deployed a large banner saying “Climate Emergency” and remained gripped to the E.U. Europa building. They also held flares while they issued their list of demands. 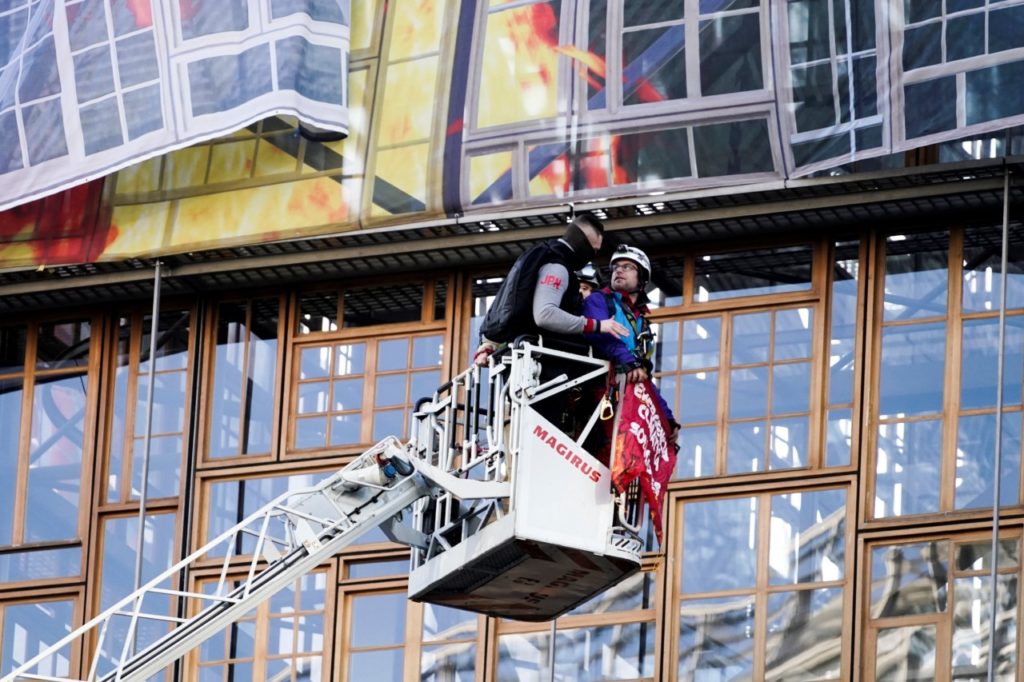 An activist of the environmental NGO Greenpeace is evacuated by a fire fighter and a member of security after attaching a banner on the frontage of the European Council’s building during a protest action, in Brussels, on December 12, 2019 ahead of the European Summit. – EU leaders meet on December 12 in Brussels over how to fund the fight against climate change. (KENZO TRIBOUILLARD/AFP via Getty Images)

Brussels authorities deployed fire ladders to the scene to dislodge the activists as a federal police helicopter flew overhead.

Ironically, AP reports the Europa building, known locally as The Egg and about 13 storeys high, was constructed in an eco-friendly way.

The facade scaled by the activists is made of restored wooden window frames from renovation or demolition sites around Europe. Its roof is covered with solar panels an d the building recycles rain water.

European Union leaders will later Thursday try to bridge deep divide among member states over how to fund climate action and redistribute taxpayer funds raised within the E.U. to member states that abide by its climate dictates.

AFP, AP contributed to this story