The news that Palantir, the prominent tech company co-founded by Peter Thiel, is leaving California for Colorado sends a strong signal that the gold is leaving the Golden State.

To be sure, there’s still plenty of precious value in California.  Apple, headquartered in the Silicon Valley city of Cupertino, just became the first company in the U.S. to be worth $2 trillion, and the state’s economy would rate as the fifth-largest “country” in the world.

And yet as has been noted here at Breitbart News, the city of Manaus, Brazil, serves as a cautionary tale for those who think that being rich now means being always rich.  Vastly engorged by the rubber trade in the 19th century, Manaus grew complacent and soon toppled from its lofty place in the global economy, never to recover.  Indeed, these days, when so much of life is virtual, one’s physical place matters less—and so the moving, and the unraveling, of a jurisdiction can come quickly.

That’s indeed what has happened on the other coast, in New York City, where Mayor Bill de Blasio’s massive mismanagement is depleting the wealth.  For weeks now, the New York Times, hardly an enemy of leftism, has been publishing ominous articles with headlines such as, “One-Third of New York’s Small Businesses May Be Gone Forever.”  And just on August 13, business author James Altucher, a lifelong New Yorker, published an essay that went further: “NYC is Dead Forever—Here’s Why.”  As Altucher explained, the big variable is Internet bandwidth; if you have enough of it, you can live anywhere.  And if that’s true for New York, it’s true for California–and everywhere.

Okay, so if we return to California, we see plenty of reasons to flee.  One concern is electricity, obviously a basic of civilization.  Will California have enough?  On August 19, the Wall Street Journal editorial detailed power shortages as another reason to skedaddle.  Under the headline, “California’s Green Blackouts,” the Journal added, “Welcome to California’s green new normal, a harbinger of a fossil-free world.”  The editorial concluded:

Democrats in Sacramento are so committed to ending fossil fuels that the hoi polloi are simply going to have to make some sacrifices—such as living with blackouts as if the state were a Third World country.  So shut up and broil, and wait for the Green New Deal to do this for the rest of America.

We can observe that humans can’t flourish without power.  And so those who want a foretaste of what a Green New Deal might be like for America can see it now in the Golden State.  Indeed, it’s interesting that in the midst of this fire season, Rep. Alexandria Ocasio-Cortez proudly tweeted that her video touting the Green New Deal was nominated for an Emmy award.  So to the extent that Californians are influenced by showbiz, we can assume that Hollywood’s bow to AOC will further inspire west coasters to continue supporting Green New Dealish policies.

So… while 2020 is highly unpredictable, I *definitely* did not expect to be nominated for an Emmy Award for our Green New Deal project with @theintercept, @mollycrabapple, @NaomiAKlein & others.

Such dogmatic “greenery” raises an intriguing paradox, because the crown-jewel companies of California are, in fact, energy hogs.  As energy expert Mark P. Mills wrote back in 2013, the Silicon Valley corporations may claim to be green, and yet they’re really not.  “The enterprise-class data centers—Google, Apple, Facebook etc.—sit in buildings that each dwarf a Wal-Mart,” Mills explained, “and each consumes quantities of electricity that rival a steel mill.”  To put that another way, every time we post something on Facebook, or look up something on Google, we’re all contributing to very un-green levels of power usage.

And now, the latest insult to California’s quality of life and thus to its business climate: Wildfires.

As the Associated Press reported on August 22, some of the largest wildfires in state history have forced thousands to flee, destroyed hundreds of homes, and killed five people.  To be sure, the response has been impressive, as more than 12,000 firefighters, aided by helicopters and air tankers, are battling the fires throughout California.

Yet still, according to the California Office of Emergency Management, as of August 22, some two-dozen fires were burning, and by August 23, more than one million acres had been burned.  We can observe that the firefighters are brave and tenacious, and yet even so, using chemicals, hand-held hoses—even mere shovels—to put out fires is not the best we can do.  California, being the citadel of high tech, should be using more brain, and less brawn. 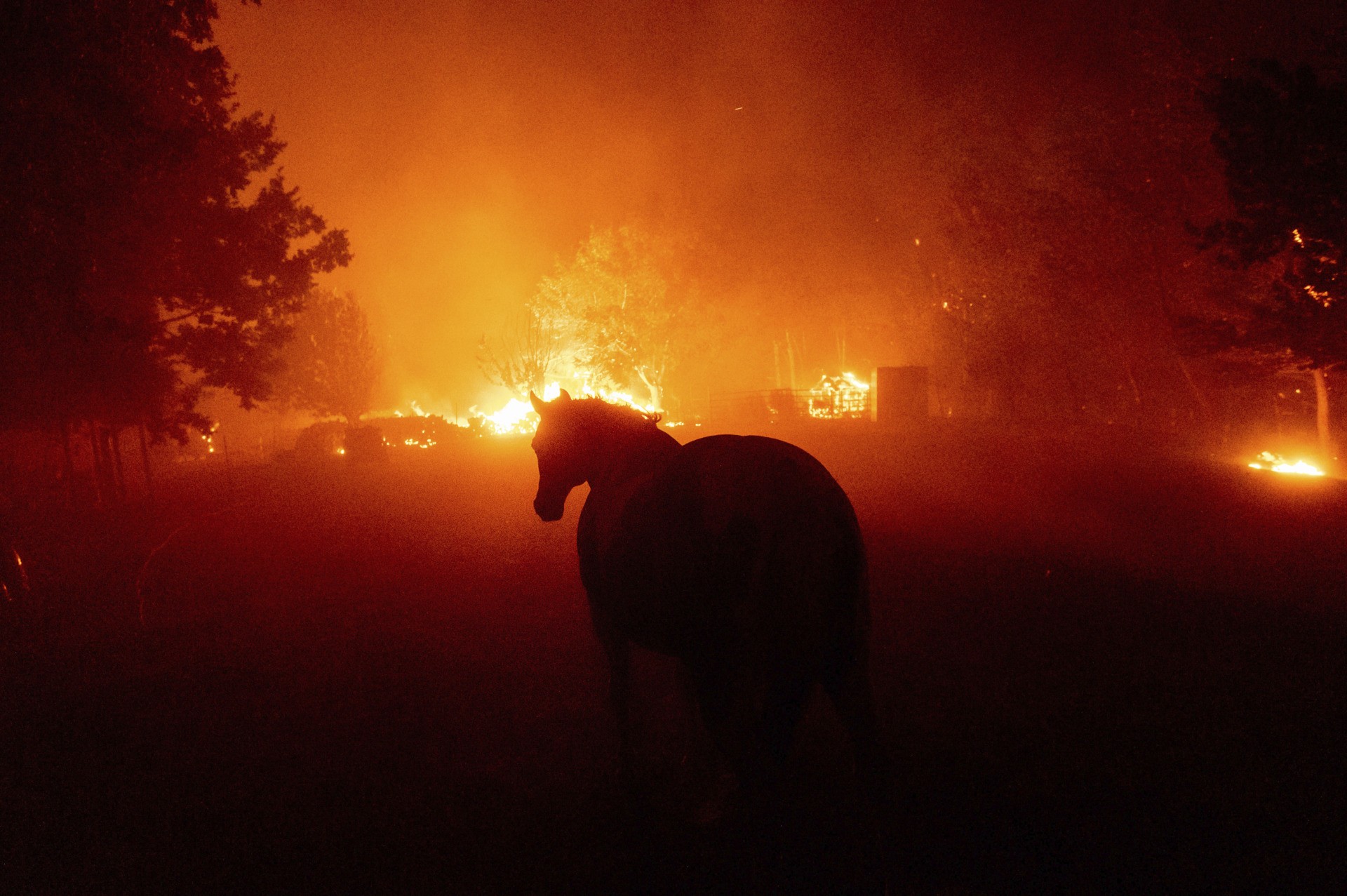 A horse walks towards flames as the LNU Lightning Complex fires tear through Vacaville, CA, on August 19, 2020. Fire crews across the region scrambled to contain dozens of wildfires sparked by lightning strikes as a statewide heat wave continues. (AP Photo/Noah Berger) 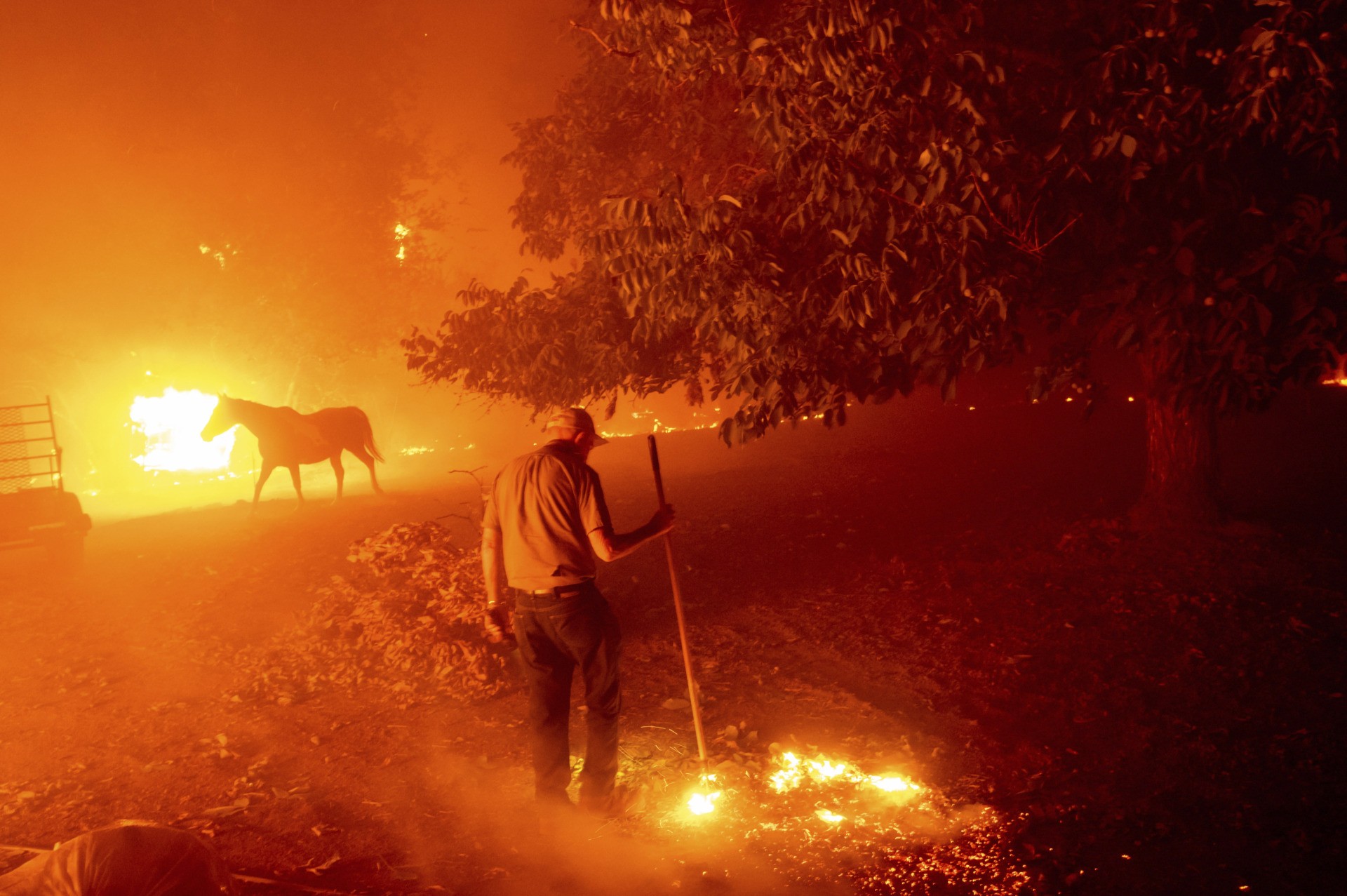 Bill Nichols, 84, works to save his home as the LNU Lightning Complex fires tear through Vacaville, CA, on August 19, 2020. Nichols has lived in the home for 77 years. Fire crews across the region scrambled to contain dozens of wildfires sparked by lightning strikes as a statewide heat wave continues. (AP Photo/Noah Berger) 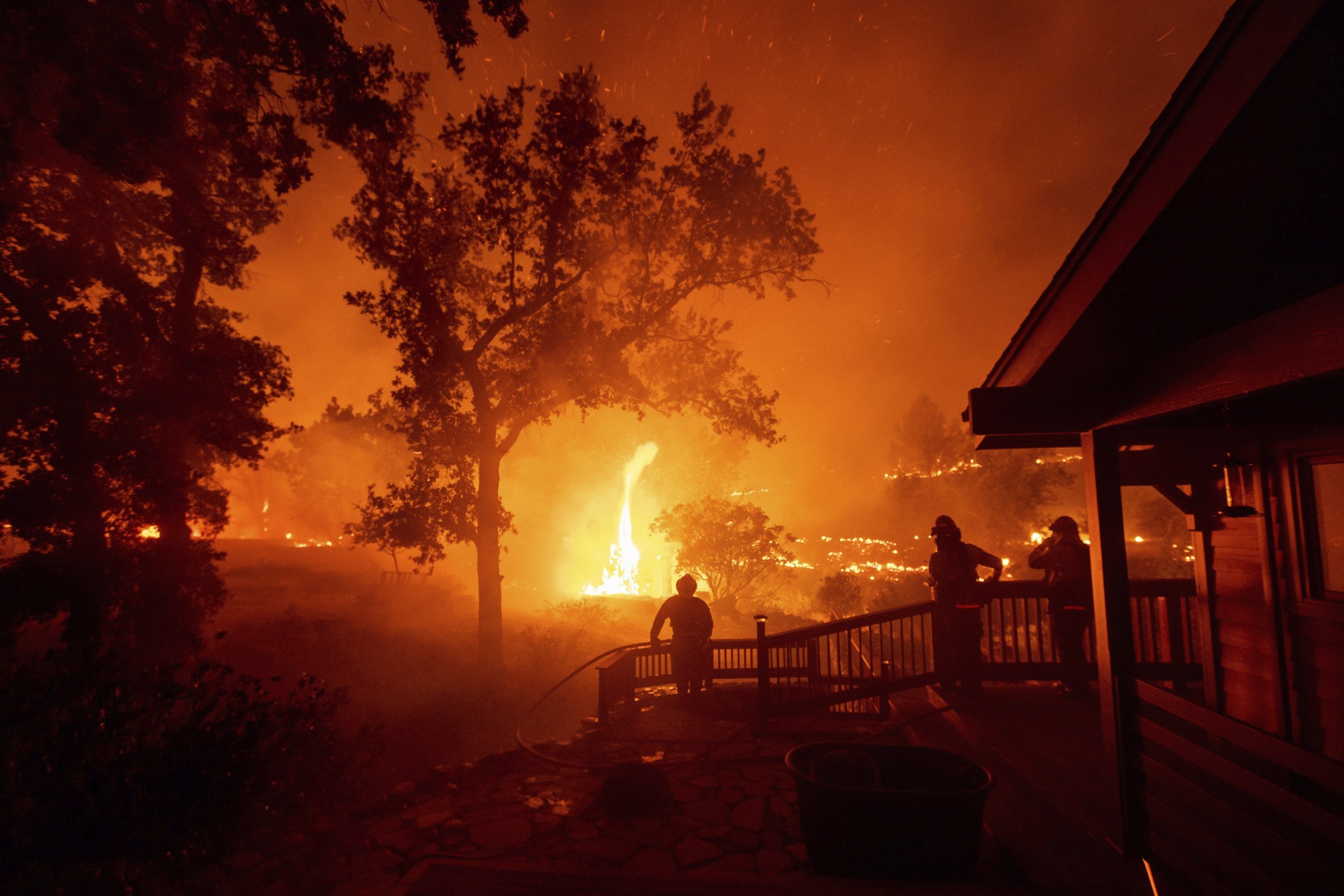 Firefighters watch flames from the LNU Lightning Complex fires approach a home in the Berryessa Estates neighborhood of unincorporated Napa County, CA, on August 21, 2020. The blaze forced thousands to flee and destroyed hundreds of homes and other structures. (AP Photo/Noah Berger)

Of course, the greens have their pat answer: Stop climate change.  And yet even if their science is correct, the fact that China is still building hundreds of coal plants is a reminder that carbon emissions aren’t going anywhere.  Which is to say, whatever California and the U.S. do will be overwhelmed by Chinese CO2 emissions, as well as the emissions of other non-green countries.

So we can see: While Californians are waiting for the yearned-for Green Day to arrive—and that might be a very long time—they’ll still have to figure out how to put out fires.

And if so, why not think big?  Specifically, why not use ocean-water desalination?  You see, there’s a large body of salt water just west of California, and the tiniest fraction of its water, desalinated, could be used to put out fires.

Back in January 2018, this author wrote an imaginary scenario in which California uses its brains to quench the fires:

After a dry summer, wildfires erupted in many places across California.  Fortunately, the governor was ready; the chief executive ordered the state’s 30 seawater desalination plants, from San Diego in the south to Crescent City in the north, to double their normal output.  Billions of gallons of clean, fresh, water from the coastal desalination plants were piped as close as possible to the locations of the fires.  From those points, the water was mostly trucked to the actual firefront, where firefighters quickly put out most of the fires; they simply inundated the flames in a watery avalanche—there was so much water, it was almost easy.

In addition, other harder-to-reach fires were doused from the air, as airplanes “bombed” the flames with endless barrages of desalinated water.  Moreover, helicopters and blimps used a new technique: They skyhooked flexible plastic water pipelines from where they lay on the ground and then pointed them back down at the fires, like a child aiming a garden hose.  The result was that all the fires, statewide, were put out within hours.  Damage was minimal.

None of that has ever happened, of course.  And yet as this author also wrote in 2018, this annual firefest, in a state controlled by Democrats, could pose an opportunity for Republicans.  That is, the GOP could take the lead in advocating  visionary desalination infrastructure.  After all, interest rates are at record lows, so why not borrow big and invest big?

Indeed, if California ever could get out from under these fires, one could see a rural renaissance, as people could live safely out in the boonies, where land is cheap and spacious, using the same desalinated water for agricultural, industrial, and recreational purposes.

Of course, this transformation would not come without a fight.  Last year, Breitbart News’ Joel Pollak published a three–part series on water in California, detailing how environmentalists and NIMBYs have teamed up to throttle the state’s water supplies, turning much of the Golden State into the Parched State.  In fact, we shouldn’t kid ourselves about the resolve of those who like the status quo to keep it that way.  For hardcore greens, the idea of expanding opportunity for ordinary people to live out in the country is exactly what they do not want to see.

Yet once again, this green-NIMBY axis would give Republicans a worthy target.  That is, Republicans could invoke Abraham Lincoln’s Homestead Act and propose a New Homestead Act, expanding property ownership and thus the conservative middle class.  Surely many Californians, wearying of greens, billionaires, and San Francisco Democrats running everything, would rally to such a proposal.

Yes, one of these days, Californians could desalinate sea water, put out fires, and spur a rural renaissance.  Or, instead, they could keep doing what AOC and the greens want and continue with this perennial burning and suffering.

If California chooses the latter, then the state’s job creators, weary of blackouts and wary of burnouts, will go looking elsewhere.  Colorado beckons.