ROME — Pope Francis once again appealed for a concerted international effort to battle climate change Monday, insisting that no one is exempt from this task.

In recent years there has been “a growing collective awareness of the urgent need to care for our common home, which is suffering from the constant and indiscriminate exploitation of its resources,” the pope asserted in his yearly address Monday to members of the Diplomatic Corps accredited to the Holy See.

“Here I think especially of the Philippines, struck in these last weeks by a devastating typhoon,” Francis said, “and of other nations in the Pacific, made vulnerable by the negative effects of climate change, which endanger the lives of their inhabitants, most of whom are dependent on agriculture, fishing and natural resources.”

This realization “should impel the international community as a whole to discover and implement common solutions,” he declared. “None may consider themselves exempt from this effort, since all of us are involved and affected in equal measure.”

In his address, the pope suggested that the measures adopted to combat climate change by the recent COP26 U.N. Climate Change conference in Glasgow were insufficient and require bolstering.

“At the recent COP26 in Glasgow, several steps were made in the right direction, even though they were rather weak in light of the gravity of the problem to be faced,” the pontiff stated.

“The road to meeting the goals of the Paris Agreement is complex and appears to be long, while the time at our disposal is shorter and shorter,” he urged. 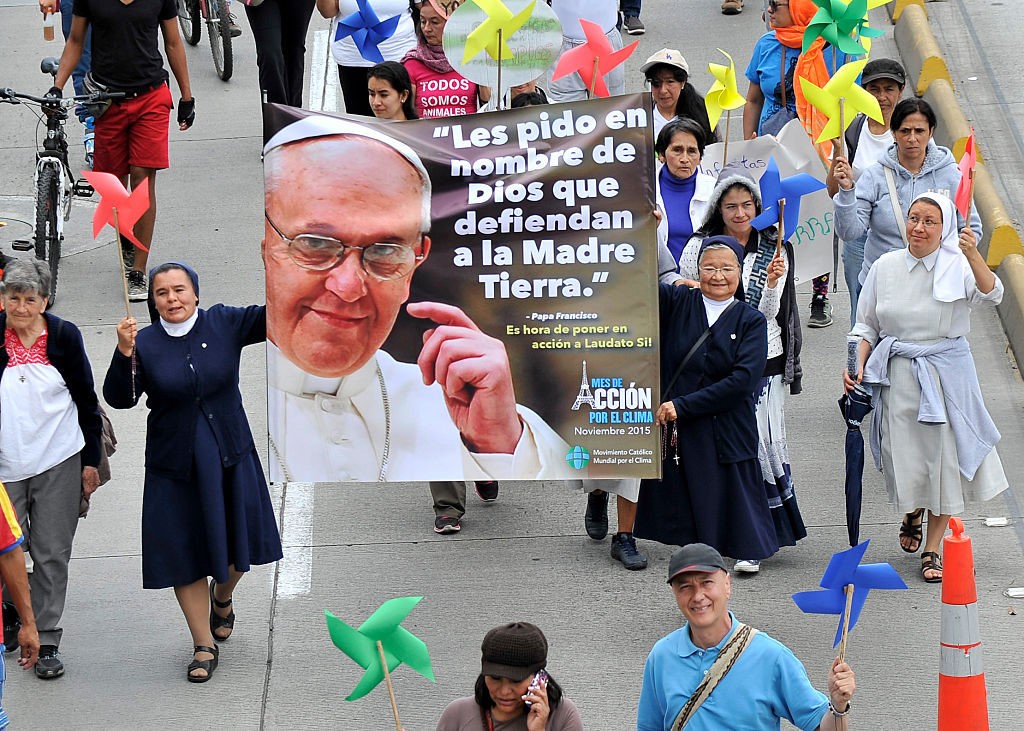 Nuns hold a banner of Pope Francis reading “I ask you in the name of God to defend Mother Earth” during the Global Climate March in Bogota, Colombia, on the eve of the U.N. conference on climate change. (GUILLERMO LEGARIA/AFP via Getty Images)

“Much still remains to be done, and so 2022 will be another fundamental year for verifying to what extent and in what ways the decisions taken in Glasgow can and should be further consolidated in view of COP27, planned for Egypt next November.”

Pope Francis has made environmentalism a hallmark of his pontificate and in 2015 became the first pope in history to publish an authoritative encyclical letter on the environment. In that letter, called Laudato Sì, the pope urged greater efforts to fight climate change.